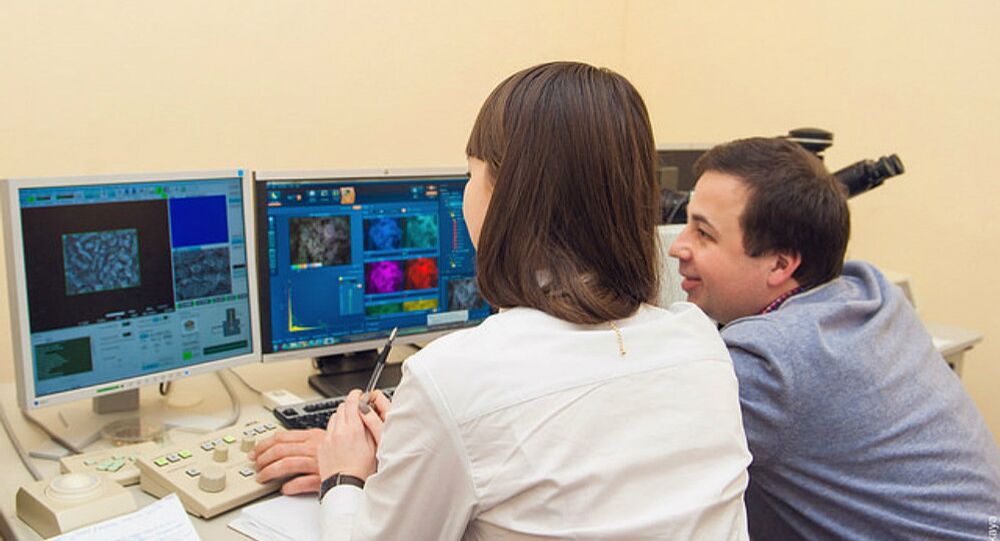 Scientists from the National University of Science and Technology MISIS, the State Research Center for Applied Microbiology and Biotechnology and the Queensland University (Australia) have created BN/Ag hybrid nanomaterials and have proved their effectiveness as catalysts and antibacterial agents as well as for treating oncological diseases.

The interest in the nanomaterials is related to the fact that when a particle is decreased to nanometers (1 nanometer = 10-9 meter) its electronic structure changes, and the material acquires new physical and chemical properties. For example, a magneto can lose its magnetism completely when decreased to ten nanometers.

© Sputnik / Alexander Vilf
Looming Italexit? Political Scientist Outlines Scenarios of March Italian Vote
Today, scientists are beginning to study combinations of various materials at the nano level instead of as separate nanoparticles (fullerenes and nanotubes). They have come up with a concept of hybrid nanomaterials, which combine the properties of individual components.

Hybridization makes it possible to combine properties that were incompatible before, for example, to create a material that can be a solid and a plastic at the same time. In addition, the scientists noted that combinations of nanomaterials often showed better or even new properties. Today the nanohybrid area is only beginning to develop.

MISIS scientists are studying the properties of BN hybrid nanomaterials. BN (boron nitride) was chosen as the base for new hybrid nanoparticles because it is chemically inert and biocompatible and has low relative density.

© Photo : David Nadlinger, University of Oxford
Small Wonder: Scientist Snaps Stunning PHOTO of an Atom Visible to the Naked Eye
BN hybrid nanomaterials are used as prospective key components of the next generation advanced biomaterials, catalysts and sensors. These hybrids have an advantageous combination of properties, such as biocompatibility, high tensile strength and thermal conductivity as well as superb chemical stability and electrical insulation. This explains their rich functionality for developing new biomedicines, reinforcement of ultralight metals and polymers and production of transparent superhydrophobic films and quantum devices.

"We have studied BN/Ag nanohybrid properties and have discovered a high potential for new applications. We were especially interested in an application for treating oncological diseases as well as their activity as catalysts and antibacterial agents," said Andrei Matveyev, a research author, Senior Research Fellow at the MISIS Inorganic Materials Laboratory.

According to Matveyev, these nanohybrids can be used in cancer therapy as a base for drug delivery medicines. The nanohybrids with the drug become containers to be delivered inside cancer cells. Nanohybrids are chemically modified by attaching folic acid (vitamin В9) to its surface through an Ag nanoparticle.

The modified nanohybrids with folic acid are mostly accumulated in cancer cells because they have an increased number of folic acid receptors, so the concentration grows thousand times higher than in healthy cells. In addition, the acidity in a cancer cell is also higher than in the intercellular space, which leads to the drug's release from its nanocontainer.

"This is why the drug is mostly released inside cancer cells, which decreases the general concentration of the drug in the organism, thus preventing toxicity," Matveyev notes.

The authors believe that nanohybrids modified for drug delivery can be applied to uses in isotope and neuron capture cancer therapy.

The synthesized particles have also demonstrated high antibacterial activity against test bacteria: Escherichia coli live in dirty water, so water disinfection by nanohybrids may prove useful in emergencies or during wartime.

Nanohybrids based on BN/Ag nanoparticles can also be used as an ultraviolet photoactive material.