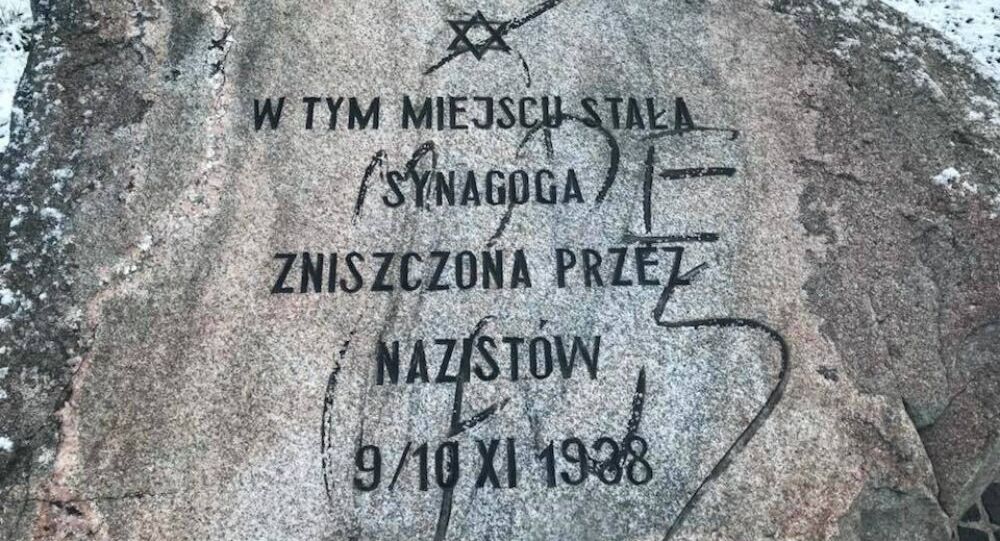 Just two days after the Polish Senate adopted a bill that bans the use of terms such as "Polish death camps" in relation to camps located in Nazi-occupied Poland during WWII, a Jewish memorial was vandalized in Poland’s Zielona Gora.

Unknown vandals have defaced a memorial rock at the site of what was once a synagogue which was burned down by  the Nazis in the fall of 1938, RIA Novosti reported, citing the director of the local art exhibition center, Wojciech Kozlowski.

The thugs daubed the boulder with the words “Juden raus” [Jews Out], and a crossed-out Star of David.

"This plague is not new to my town; it was here before… Anti-Semitism is not a philosophy, it’s a disease, but of a specific kind,” Kozlowski wrote on Facebook.

Built between 1882 and 1883, the synagogue in Zielona Gora was burned down by local Nazis during Kristallnacht, November 9-10, 1938, when Jewish-owned businesses and prayer houses across Germany and parts of Austria were subjected to a wave of attacks, and hundreds were killed.

The synagogue was never rebuilt.

More than 70 years after the Holocaust, synagogues and Jewish memorials around the world continue to be vandalized by modern-day admirers of Adolf Hitler.

More Than 100 Graves Desecrated at Historic Jewish Cemetery in Philadelphia