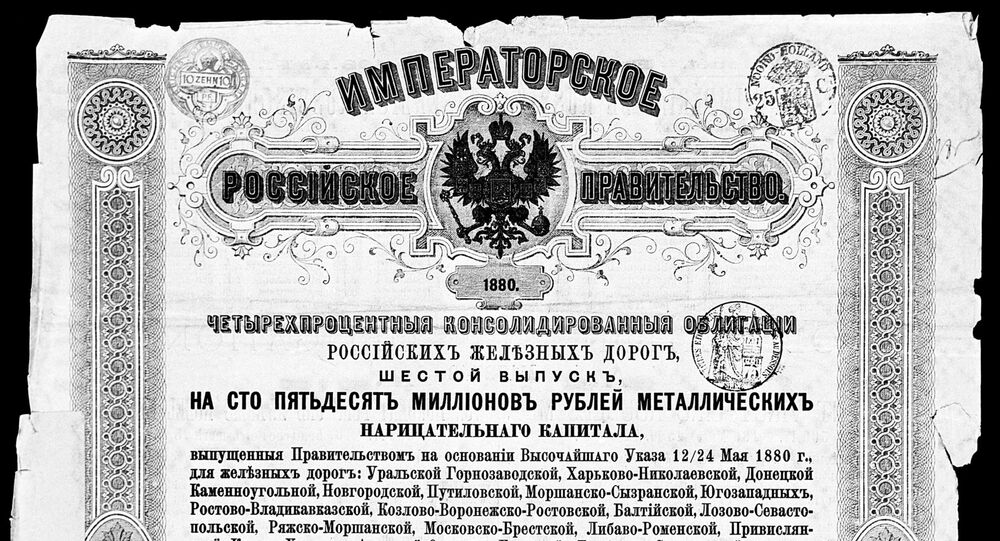 A group of about 400,000 descendants of French investors who sunk money into Tsarist-era debt annulled by the Bolsheviks in 1918 continue to hold out for compensation, Radio France Internationale reports.

In 1867, Russian railway companies began issuing gold-backed government bonds to finance the construction of railway expansion projects. Starting in the mid-to-late 19th century, French investors purchased an estimated 15 billion gold francs of bonds (worth about 53 billion euros, or $65 billion US today) into the Russian bonds. While early investors happily collected dividends, the assets were rendered worthless when Russia was thrown into revolutionary turmoil in 1917.

In January 1918, Bolshevik leader Vladimir Lenin signed a decree renouncing the country's Imperial-era debts, effectively closing the door on all claims by countries, companies and individuals to whom the Russian government may have owed money to.

© CC0
From Binomo With Love: Russian Pranksters Prepare to Send New Song to Nikki Haley (VIDEO)
In the mid-1990s, post-Soviet Russia and France entered into an agreement aimed at settling outstanding imperial debts, with Moscow volunteering to pay out about 330 million euros in compensation, even though Paris never officially brought up the issue.

However, according to a report by Radio France Internationale, the hundreds of thousands of descendants of the French bondholders are still fighting for their lost dividends, organizing into what they call the 'International Federation of Russian Bondholders'.

"The amounts are huge. We're talking about 28 million bond notes…How much is each of them worth today? We would estimate a value of 10,000-30,000 euros," Eric Sanitas, the president of the association, told RFI.

And while the issue is closed, as far as Moscow is concerned, Sanitas emphasized that "Russia is far from bankrupt," and must pay. "A state's debt by its definition is imprescriptible. Russia must pay. Those are the rules of the game," he said.

© Photo : Twitter / FC Spartak Moscow
Why the UK Media Go Bonkers Over Spartak Moscow "Racism", and What They Don't Tell You
After the Russian Revolution, France confiscated assets belonging to the Russian imperial government, but did not compensate its bondholding citizens, as British authorities had in the 1980s with an estimated 5.5 tons of Tsarist gold stored in British banks.

As expected, Russians reading the news of the French bondholders' demands didn't exactly take the demands kindly, turning Twitter into a mess of memes, jokes, and historical musings about 'just who owes whom what.'

"Media: The French have demanded that Russia pay for Czarist debt. Tell the frogs that the Czar has kicked the bucket, but that they can write to Lenin in the Mausoleum."

"Let France at least first pay for its salvation a minimum of two times during the two world wars."

"If France were to recognize Russia in the borders of Imperial Russia, then there might be some sense in talking about debts."