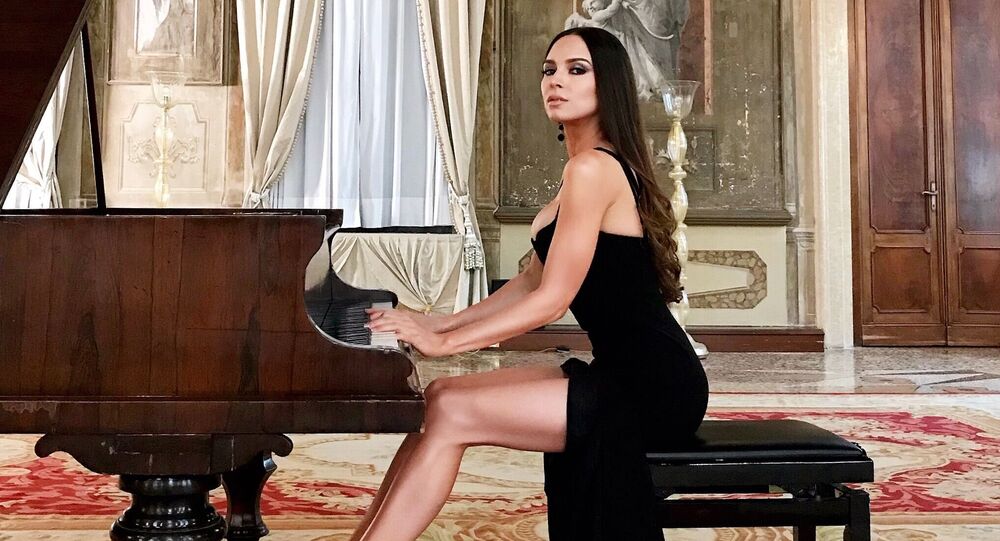 Lola Astanova is a young pianist who has forged an exhilarating career and turned around the classical music scene with her unique artistic approach and fashion. Sputnik spoke with Astanova in a candid interview.

A modern-day virtuoso, Lola Astanova was born in Uzbekistan but has been residing in the US since 2000. Astanova has forged a breathtaking career and has become famous not only for her virtuoso performances but also for her unique sense of style, which is feminine, sexy and vivacious.

According to Astanova when she picks her performance outfits she thinks about the repertoire as well as the venue and the audience.

“I want my outfits to look vivid and organic because it is a part of my presentation.  For the people in the audience the concert is a special event, the event they have been waiting for and paid good money to attend, so the last thing they want to see is some messy figure that just rolled out of bed, and came to the stage to mechanically run through a bunch of notes,” Astanova told Sputnik Mundo.

Her passion for performing, evocative of the Romantic age virtuosi, is her greatest love and through her videos many have discovered the music of Chopin, Liszt and Rachmaninoff for the first time. Astanova’s own original virtuoso transcriptions have also become YouTube and Instagram sensations.
© Photo : Lola Astanova
Lola Astanova

“Reading about Liszt and Chopin one quickly realizes that those were the rock stars of their day: free, passionate and real dandies. So, it is odd that their music has come to mean something restrictive, sad and reeking of naphthalene,” Astanova said.

She further said that she deals with a living art form, the one that has a pulse, a breath, instincts, feelings, and thoughts. “I don’t have a specific goal ‘to break the stereotypes’, I simply do what I love as I feel it, and I am very glad that it touches and inspires many people,” the pianist said.

Talking about her work ethic, the artist said that she believes her most valuable quality is her ability to focus, to block out the noise and distractions, and to finish everything that she starts.  “I think it’s the foundation of success in anything,” she said.

Her musical journey started at an early age when her mother, who was a piano teacher, gave her first lesson at the age of six. Lola instantly showed a talent for the piano and soon after she joined the studio of a renowned piano professor Tamara Popovich.

Looking back at her early days of playing the piano she said, “I was so little that I couldn’t yet reach the pedals, and they had to put two large telephone books under my feet.  Tamara Popovich was the person who developed my basic skills and forever instilled professionalism in me.”

She also studied with two musical geniuses Mark Rusak who was her first harmony professor, and Lev Naumov who was known simply as “the godfather of the Russian piano school.”  She moved to the United States in the early 2000s, and the main motivation behind that decision was her career.

Astanova’s big break came in 2007 when she starred in a $1.6 million Neiman Marcus Classical Superstars Fantasy Concert, which also featured the Kirov Orchestra and was hosted by ABC’s Regis Philbin.

In 2012 the pianist made her Carnegie Hall debut which was hailed as a triumphant performance. With her unique style she has attracted a wider and younger audience to classical music.

Today, Astanova has a broad audience and apart from a large fan base in the US, Canada, Europe and Russia, her posts draw huge numbers of viewers, in places such as Turkey and Iran, and in Asian countries – in China, Korea, and Singapore and also in Latin America in Mexico, Brazil, and Argentina.

“I am always fascinated to see those stats because the variety of cultures, languages, beliefs, social and political backgrounds among my viewers never seizes to amaze. For me, it is yet another confirmation that music is a universal language that connects us all,” Astanova told Sputnik.

Her latest performance for a documentary film that featured her interpretation of Gershwin’s “Rhapsody in Blue” received an Emmy Award.

Talking about her future plans, Astanova said that the upcoming year promises to be very interesting. A documentary called “The Journey to the Theater of Silence”, about her unique concert with Andrea Bocelli will be released.

Secondly, Stjepan Hauser of the 2CELLOS and Astanova are preparing some duet recordings and a concert program that will, probably, “challenge a few more stereotypes about classical musicians.”

“Finally, my own original compositions that up until now have been kept as ‘classified’ will be released, and, hopefully, they delight my loyal fans, and win over many new hearts,” Astanova said.

Meanwhile in LA: "Tiger" Chases a Truck Where a Guy Plays the Piano for Him