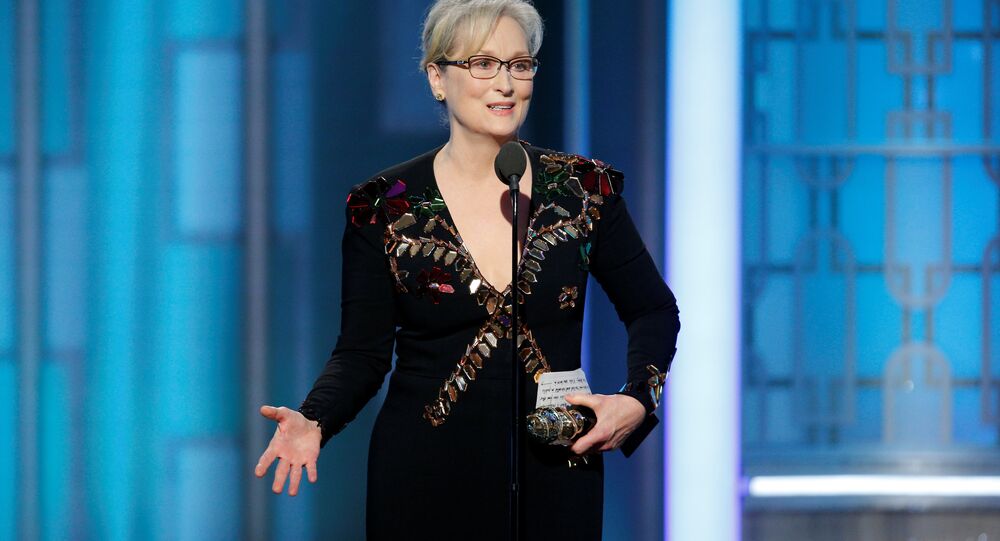 On Tuesday, posters of Meryl Streep began to pop up around Los Angeles, asserting that the Oscar-winning actress "knew" Harvey Weinstein was allegedly assaulting women.

Pictured with Weinstein, the poster shows Streep wearing a big smile, with a red and white banner reminiscent of Barbara Kruger's work bearing the words "She Knew" plastered over the 68-year-old actress's eyes.

​It's unclear who created the poster. Street artist Sabo, who recently lashed out against Minnesota Sen. Al Franken, declared he "had nothing to do" with the campaign. However, the LA-based "rebel artist" revisited the topic Wednesday by suggesting that the poster was "a group effort."

According to reports, the posters have been spotted near the SAG-AFTRA building, the 20th Century Fox studio in Century City and even near Streep's Pasadena home.

The posters followed a statement issued Monday by the actress in which she stated that Weinstein used his association with her "to lure young, aspiring women into circumstances where they would be hurt."

"I wasn't deliberately silent. I didn't know," Streep said in her statement. "I don't tacitly approve of rape. I didn't know. I don't like young women being assaulted. I didn't know this was happening."

Streep's statement wasn't a bit of caprice: it was in response to a since-deleted tweet from fellow actress Rose McGowan who called Streep a "hypocrite" for calling on women to wear black to the Golden Globes to protest sexual misconduct in Hollywood.

"Actresses, like Meryl Streep, who happily worked for The Pig Monster, are wearing black @GoldenGlobes in a silent protest," McGowan, who alleges Weinstein raped her early on in her acting career, tweeted Sunday. "Your silence is the problem. You'll accept a fake award breathlessly & affect no real change."

"I despise your hypocrisy. Maybe you should all wear Marchesa," the tweet read.

Streep has yet to release a statement regarding the posters.

Since the story first broke on Weinstein's decades-long history of sexual misconduct, a total of 84 women have come forward with claims against the movie producer. In addition to McGowan, accusations have come from Asia Argento, Rosanna Arquette, Heather Graham, Eva Green and Lupita Nyong'o.