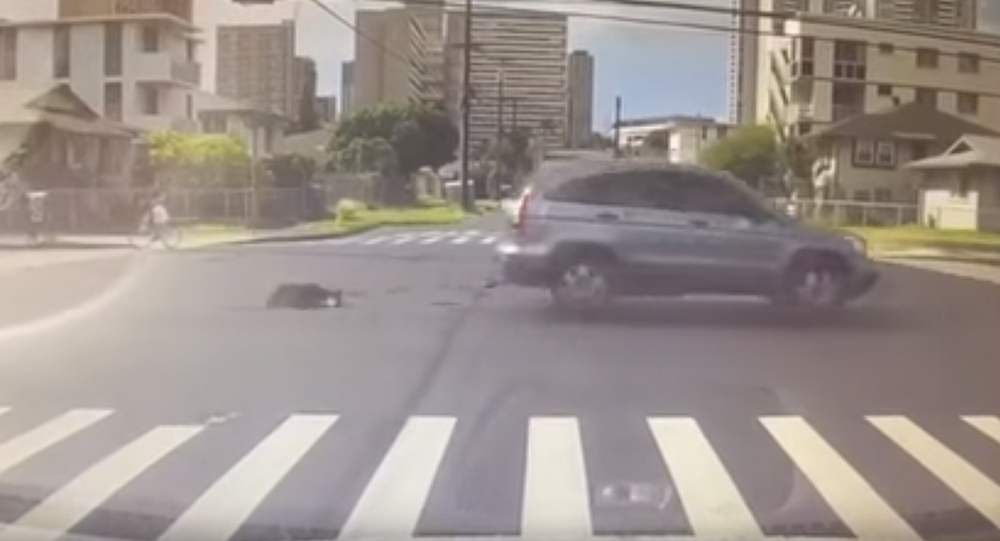 ‘She is Out of Her Mind!:’ Hawaii Woman Caught Dragging Dog Behind Car (VIDEO)

A horrifying video captured by driver Johnny Cheng’s dashcam on Friday shows an unidentified driver dragging her dog behind her silver SUV in Honolulu, Hawaii, for at least two blocks.

Cheng was stopped at a stop sign when he spotted a dog being dragged behind a car as it sped through the intersection onto a cross street, according to the video he uploaded to YouTube last week. Cheng turned to follow the woman, with two other drivers following, too.

"She is crazy! She is out of her mind! While changing, we keep [pressing] the horn to attract her attention. But she does not seem to hear at all," Cheng wrote in the description of the video.

Cheng wrote that he dialed 911. However, the line was busy and he was placed on hold.

Cheng and the other drivers then took matters into their own hands, eventually stopping the woman at a red light. The dog is shown standing up and limping to the right while still attached to the car. The 40-second video cuts off when the SUV driver gets out of the car and another woman runs toward the SUV.

"Finally we stop her at the red light (intersection of Date Street and Isenberg Street). She came out, released the dog and put into the back seat. Drove off without saying anything," Cheng wrote.

On Sunday, Cheng updated his post with more information. Cheng wrote that the police said the incident could have been an accident. They also said the SUV driver eventually took her dog to the vet.

"Do not tie your dog to your door handle or to the rear of your car because you may forget when you are driving…" Cheng advised drivers.