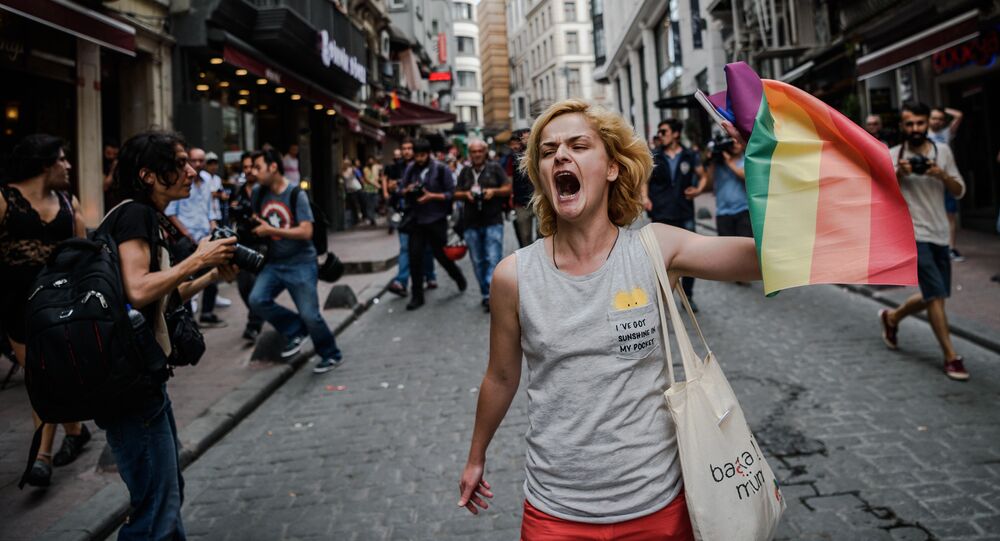 The governor’s office in Ankara has prohibited the public showing of all films, exhibitions and events related to lesbian, gay, bisexual and transgender (LGBT) activities. LGBT communities, however, are not banned in the country and are legally registered with the state.

"Starting from November 18, 2017, considering public sensitivities, any events such as LGBT… cinema, theater performances, panels, interviews and exhibitions are banned until further notice in our province, in order to provide peace and security," the office of the capital's governor said in its statement on Sunday, referring to a number of such activities which were previously planned across the region.

The statement further suggested that "a part of society with different qualities in terms of social class, race, religion, sect, or region could therefore explicitly incite another part [of the society] to grudges and enmity, posing an open and imminent danger in terms of public safety."

The move comes shortly after Ankara authorities banned a German gay film festival citing "public safety and terrorism risks." Four movies by German directors were scheduled to be screened during the two-day event, which was organized jointly by the German Embassy and the Pink Life QueerFest, a project of Turkish (LGBT) Solidarity Association in Ankara, on November 16-17.

"Considering that the content could incite grudges and enmity towards a part of society… and the intelligence reports that terror organizations are seeking to attack dissident groups or individuals, it is evaluated that this film screening could be provocative and draw reactions," the Ankara Governor’s Office said in its statement on November 15.

Ankara is home to a vibrant LGBT civil society, the banning of events is another move to limit freedoms of LGBT activism--freedoms that have become increasingly limited during the past few years. https://t.co/zHlBlWOtj7

​Although homosexuality is not banned in Turkey and numerous LGBTI associations are legally registered, the above moves prompted rights activists to insist that LGBTI individuals face discrimination.

I say west hollywood protesters organize and all go to Ankara to spite them! Maybe a LGBT protest in Raqqa Syria, that'll show them!

​However, annual LGBT pride marches, which had gone ahead peacefully in Istanbul for 13 years,  have been banned for the last three years following a vocal campaign by local hate groups.