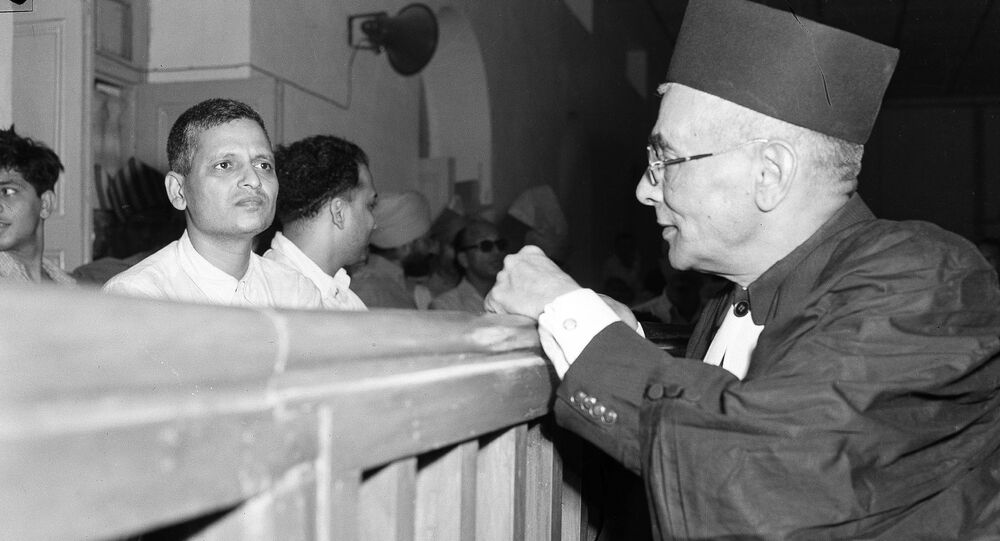 Mahatma Gandhi’s assassin Nathuram Godse, who was hanged, is revered by some radical outfits in India as a true martyr, as he was against the partition of India after the end of British rule.

New Delhi (Sputnik) — The death anniversary of Nathuram Godse, the person who killed India's father of the nation, Mahatma Gandhi, has lately been in the news for all the wrong reasons. Godse was hanged on November 15, 1949. The day is observed in India by some radical groups as "balidan diwas" or the day of sacrifice.

© REUTERS / Sivaram V
Tradition Over Safety: India's Kerala State Slammed Over Temple Festival
Some right-wing Hindu fringe groups eulogize the day and call Godse a martyr. They plan to erect a temple dedicated to Godse. The Hindu Mahasabha – the umbrella organization of such fringe groups, on Thursday informed through a press release that a 32-inch tall bust of Godse was installed at its office in the Daulatganj area of Gwalior city on the occasion and that a temple would be built at the site.

The national vice president of the Hindu Mahasabha, Jaiveer Bharadwaj, later told the PTI that the organization's request for permission to build a temple dedicated to Godse was rejected by the local administration. He said the temple will now be functional at the office with plans for a routine veneration of Godse's bust. Godse worked at the same office for some time, according to records.

© CC BY 2.0 / meg and rahul / Indian Ambulance
More Than 80 Killed, 250 Injured in Massive Fire at Temple in India
Bharadwaj described Godse as a true nationalist, as he was against the partition of India that divided the country into India and Pakistan in 1947. Godse, who assassinated Mahatma Gandhi on January 30, 1948, wished that his ashes would be immersed in water, as per Hindu ritual, only after India was unified again. Therefore, his ashes are still preserved by his followers.

The veneration of Mahatma Gandhi’s assassin, Nathuram Godse, has evoked a mixed response on the social media. India’s opposition party, the Indian National Congress, has demanded that a case of sedition be filed against the group.

Is it true there will be a Godse temple in Madhya Pradesh? Godse, the man who killed Mahatma Gandhi, the father of the nation!

Those who call any one “ anti nationalist “ at the drop of a hat are silent about the anti nationals who have made a GODSE TEMPLE. Why???

When people can mourn the death of Terrorist Afzal Guru and Burhan Vani in Kashmir. Why can't Godse? Atleast Godse killed Gandhi unlike terrorists who killed innocent people. https://t.co/6RcnmvFZI2

Who says Godse was anti national? He was perhaps the most devout nationalist and patriot of our times. He hanged to save our country. https://t.co/NU1aoCueBu

Dude! U were arguing about Gandhi. Why are you digressing now?Have you run out of arguments? Why are you bringing in Savarkar/Godse? Can't you defend Gandhi & #Congress on facts?
Answer me.I repeat,why did #Congress conceal facts about Gandhi?Why did u fail to end discrimination? https://t.co/Re1rFXJkb0

Meanwhile, Gwalior's additional district magistrate has sought clarification from the Hindu Mahasabha on why Godse's temple was built without authorization.

At Least 80 Killed in Massive Fire at Temple in India