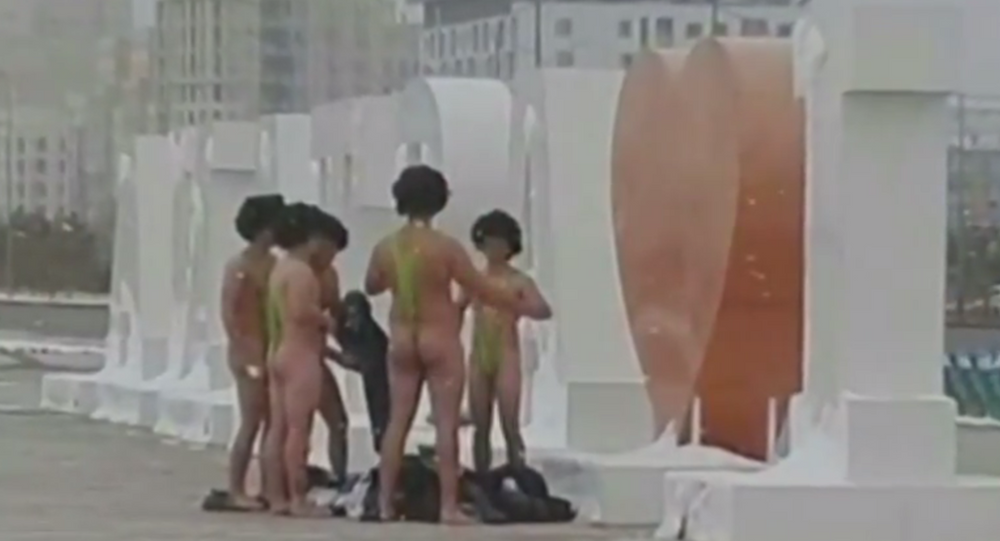 On Tuesday, local media reported that the tourists had been arrested on charges of hooliganism and were each fined about $67 for their revealing swimsuits. The men apparently stripped off their clothes in front of an "I (heart) Astana" sign in the city center as a joke.

The incident received mixed reactions from locals. Kazakh journalist Assem Mirjekeeva wrote on Facebook, "I wonder how would the Czech authorities react if our citizens did the same in their country?"

"I think they would have not reacted. It is because our police are so sensitive," Facebook user Vitaliy Shuptar responded.

"This is teasing, they should have been jailed," an Instagram user commented, while another poster wrote, "They should have had a criminal charge for insulting the honour of the nation." The stunt did find defenders among younger social media posters, who generally told those offended to lighten up. "It's mad funny. If you're offended you're a fool," Georg Vassilenko wrote on Facebook.

​Kazakh law considers hooliganism to be any act that is "a particularly audacious violation of public order," including "committing indecent acts," the Daily Mail reported.

The maximum penalty for hooliganism is up to a year in prison or in a "corrective labor" camp, although these punishments are usually for violent acts.

The mankini was made popular by the comedy film "Borat: Cultural Learnings of America for Make Benefit Glorious Nation of Kazakhstan."

The movie's release was banned in Kazakhstan because local authorities claimed it inaccurately depicted the country as racist and sexist. The country has slowly come to terms with the film, however. In 2012, Foreign Minister Yerzhan Kazykhanov praised the film for raising Kazakhstan's profile and increasing tourism to the Central Asian nation.

However, in the same year, the film spurred controversy again when the spoof Kazakh anthem from the movie was played instead of the real anthem during the Arab Shooting Championships.