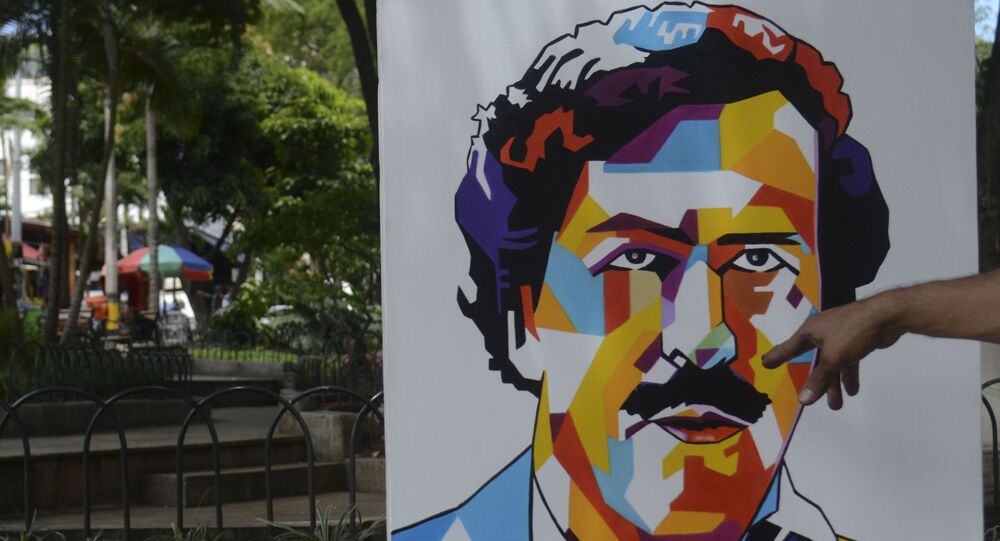 Juan Pablo Escobar, son of notorious Colombian drug trafficker Pablo Escobar, has lived part of his life in hiding under an assumed name after his father's death. In a heartfelt interview with Sputnik, he discussed Escobar's collaboration with the CIA, myths surrounding his public image, and the drug problem that continues to plague his country.

Sputnik Mundo had the opportunity to speak to Escobar at the 40th International Book Fair in Montevideo, Uruguay, where he was promoting his latest book, "Pablo Escobar: Infraganti, What My Father Never Told Me."

The new book is Juan Pablo's second examination of his father's life and death. In his first book, he traced his family's history, offering previously unheard insights into the drug baron's family life. In the second, he shares his impressions from meetings with the relatives of his father's victims, Escobar's accomplices and other key actors from the events of the period when his father was the most famous drug kingpin in the world.

"The new book discusses the decisions which my father made but decided not to tell me about, which I learned about in the course of my own investigation," the author explained.

"For the first time, my father's enemies have been given a voice to talk about who Pablo Escobar is to them. Giving them this opportunity through the words of his own son is important, I think, to recreating the perceptions we have about the figure of Pablo Escobar. Not those which his own son had about him, but those of the people who hated him, who paid to have him killed, who do not have any sympathy for him as a person."

The image of the fight against drug trafficking in Colombia that exists in popular culture is focused mainly on the figure of Pablo Escobar himself. In his new book, Juan Pablo attempts to expose some of the other figures from this real-life crime epic –including corrupt officials at the highest levels in Colombia and abroad. The book talks, for example, about Escobar's relationship with the US Drug Enforcement Administration (DEA) and the CIA, a relationship which the drug lord himself once described as follows: "We ended up working for our pursuers."

"It's clear that the DEA and the CIA have a great deal to do with this, although I do not know if it's about the organizations in general or about individual agents," Juan Pablo said. "I do not want to generalize and say that the agencies were totally corrupt, but there were sectors whose agents cooperated with him at one time as a matter of convenience."

© AFP 2020 / SCANPIX SWEDEN
Ex-Pentagon Advisor Reveals How CIA Killed Western Politicians During Cold War
In his book, Juan Pablo confirms that elements of the CIA and DEA pursued a policy of 'peaceful coexistence' with the drug baron to finance the anti-communist struggle in Central America in the 1980s. This included a drug route which his father called "the train," through which Escobar was able to send 800 kilograms of cocaine twice a week to Miami International Airport without interference from US authorities.

Juan Pablo discovered many new details about his father's life through his research on the new book, including how the gangster lived out the last 72 hours of his life, and the major impact that the 1984 murder of Colombian Minister of Justice Rodrigo Lara Bonilla had on his family.

In his interview with Sputnik, the author dispelled some of the myths which have long accompanied the infamous head of the Medellin cartel. "It's long been said that my father was willing to pay off Colombia's foreign debt. This is not true. He just wanted to demonstrate his enormous economic wealth, the scale of which still remains unknown," he said.

© AP Photo
Pablo Escobar, left, and Jorga Luis Ochoa, right with hat, the two leaders of the Medellin cocaine cartel, are shown at a bullfight in Medellin, Colombia, in 1984
© Photo : National Crime Agency
Stop Right There! Boat Carrying $260Mln Worth of Cocaine Seized in the Atlantic
Furthermore, Juan Pablo said that although he understands that the multitude of crimes orchestrated by his father have made him a dreaded figure, he regrets that there is little to no focus on some of the positive things he has done. "This is natural, but also speaks very poorly about us as human beings, who attribute importance only to negative facts," he said.

For instance, Escobar said that his father felt sincere compassion for Colombia's poor, something that's in stark contrast to his cold-blooded willingness to carry out swift and bloody reprisals against anyone who betrayed him or stood in his way.

Asked to share his impressions of his father's portrayal in films and TV shows, including the Netflix series Narcos, Escobar Boss of Evil, and Loving Pablo, Juan Pablo said that while he did not oppose the use of his father's image, he is concerned by the way in which it's being done. The implicit message, he said, glorifies criminal activity and incites new generations seeking to emulate the drug kingpin.

"Thousands of young people from all over the world write to me saying they want to be like him, to look like him…Thanks to Netflix, they think that being a drug dealer is cool, and this is wrong. I experienced the life depicted in the series in reality, and would never become a drug dealer, because I know the consequences; that's something that the younger generation isn't shown," Juan Pablo said.

In Search of the Promised Land

The author candidly told Sputnik that his father's death in 1993 marked a turning point in his own life. Immediately after Escobar was killed, the young man, his mother and sister fled Colombia, and changed their names, with Juan Pablo becoming Juan Sebastian Marroquin. Unlike his father, the young man chose a path of peace, and that is the message he wants to convey through his story.

"For those of us who grew up in that world, changing our name was like changing your clothes. We didn't take it personally. As human beings, we are strongly attached to our names and the stories of our lives. But in that world all of this lost any importance; my dad changed his name perhaps ten times."

In 1994, after traveling through Peru, South Africa, Mozambique and Brazil, Juan Pablo settled with his family in Buenos Aires, Argentina. With his new name, he was able, in his own words, to "enjoy the privilege of being a nobody." He finished school and college in industrial design and opened a real estate business together with his mother. But their newfound peace wouldn't last long. On November 15, 1999, Juan Pablo and his mother were arrested by Argentinian police after their accountant had revealed their true identity.

"My mother and I were never among those who applauded my father's violence," Juan Pablo stressed. "As his son and wife, we always tried to make him understand the consequences of his cruelty and to dissuade him from this path. Sometimes he listened to us, but he was also a stubborn man who did as he saw fit."

Escobar May Be Gone, But Colombia's Drug Problem Remains

According to the author, the drug problem which plagued his country in his father's time continues to exist and is getting worse. "Nothing has improved, and this is not a sign that we are doing well in the fight against drugs," he said. "The players are changing, but all the same positions remain occupied. Pablo Escobar's position is now filled by someone new."

The whole situation makes Juan Pablo skeptical about the war on drugs, which he characterizes as having been "lost in a knockout blow." He stressed that today, "more coca leaves than ever before" are being grown in Colombia.

For that reason, he is a proponent of a path to legalization, similar to what Uruguay has done with marijuana, which in his words, "in one stroke" robbed the cartels of their power, money, and ability to corrupt public officials. Prohibition has been done to death and doesn't work, he said, and in fact only serves to "generate more stories like those of Pablo Escobar."