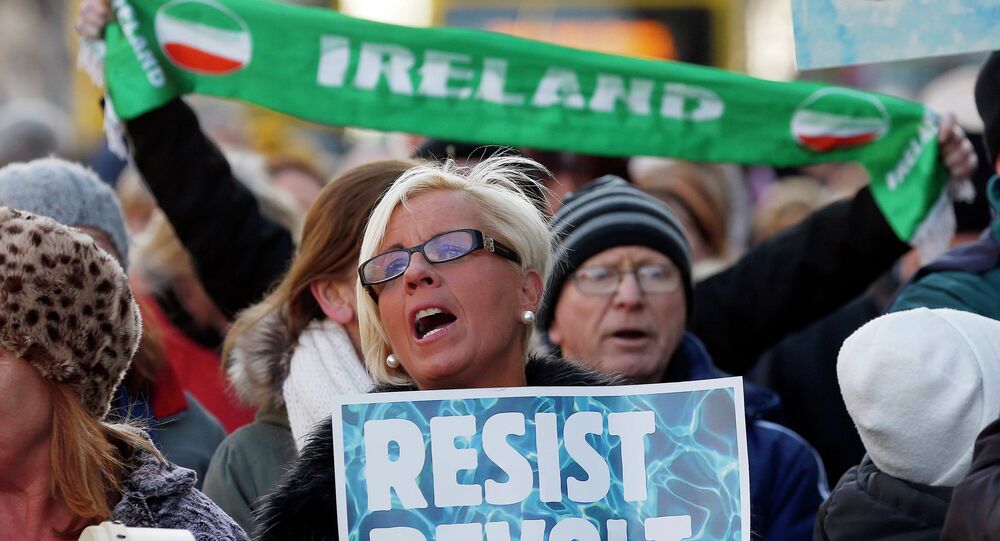 Last week, the Ireland-Palestine Solidarity Campaign (IPSC) handed to the Irish government petitions with 23,000 signatures requesting an end to the bilateral arms trade between Israel and Ireland.

The human rights campaigners, deputies and senators from the Oireachtas — the Irish Parliament — and representatives from the Dublin City Council, all staged a ‘die in' outside the Parliament gates, lying on the ground as if dead.

Before handing over the petitions, Al Tamimi, who is a Palestinian-Irish citizen, explained the petitioners' mission: "The IPSC has collected over 23,000 signatures to a petition calling for an end to the bilateral arms trade between Ireland and Israel — a trade worth some 22 million euros over the past decade or so."

"This Wednesday, October 4, we will hand the petition in to the Irish government to make them aware that this profiteering from the oppression and murder of Palestinians and colonization of their land is unacceptable to the people of Ireland," Al Tamimi added.

Al Tamimi went on to say that the IPSC's ultimate goal is to initiate an arms embargo on Israel and inspire change at the government level to ensure freedom and justice for Palestinians.

"Our aim is [to] highlight the Irish state's shameful complicity in the oppression of Palestinians that arises from this trade in death. Ultimately, we wish for for an arms embargo on this colonial apartheid that kills, oppresses, tortures and steals land and liberty from my people on a daily basis."

Ireland, which has dealt with its own history of occupation by the British, has long supported Palestinians. The Irish Republican Army in Northern Ireland has long expressed its solidarity with the Palestine Liberation Organization, especially through the period of turmoil known simply as "The Troubles" in the 1970s and 80s.

Tensions between Ireland and Israel increased when American activist Rachel Corrie, who set sail from the east coast of Ireland in an attempt to prevent the Israeli army's demolition of Palestinian houses, was killed during an Israeli military operation in 2003 when she was run over by an Israeli bulldozer she was attempting to block using her own body. Mairead Maguire, a peace activist from Northern Ireland, traveled with Corrie on the same boat.

In addition, the 2010 expulsion of Israeli diplomats who used forged passports from Ireland to track and kill a Hamas official in Dubai greatly strained relationships between the two states.