Out of Proportion: Single Typo Prompts Forbes to Accuse Sputnik of Fake News

A Forbes article has accused Sputnik of falsely reporting that the perpetrator of the Las Vegas shooting had the connections to Daesh, according to the FBI, describing the result of a typo as 'fake news'.

In an article entitled "Facebook And Google Still Have A 'Fake News' Problem, Las Vegas Shooting Reveals," author Kathleen Chaykowski singles out social media sites 4chan and Blogspot as well as right-wing news outlet Gateway Pundit for spreading a false story on the identity of the shooter (later confirmed to be 64-year-old Nevada man Stephen Paddock).

But Chaykowski also pointed the finger at Sputnik. "Facebook searches for the name of the misidentified suspect on Monday generated a number of fake news results, and the social network's 'Trending Topic' page for the shooting directed users toward more false reports, including stories by Russian propaganda site Sputnik with headlines such as 'FBI Says Las Vegas Shooter Has Connection With Daesh Terror Group,'" she wrote in the article that went up Monday night.

However, the article was published with a typo in the headline which originally was missing the word 'No'. This mistake, a result of a human error, was by detected Sputnik staff in a matter of minutes and immediately rectified. 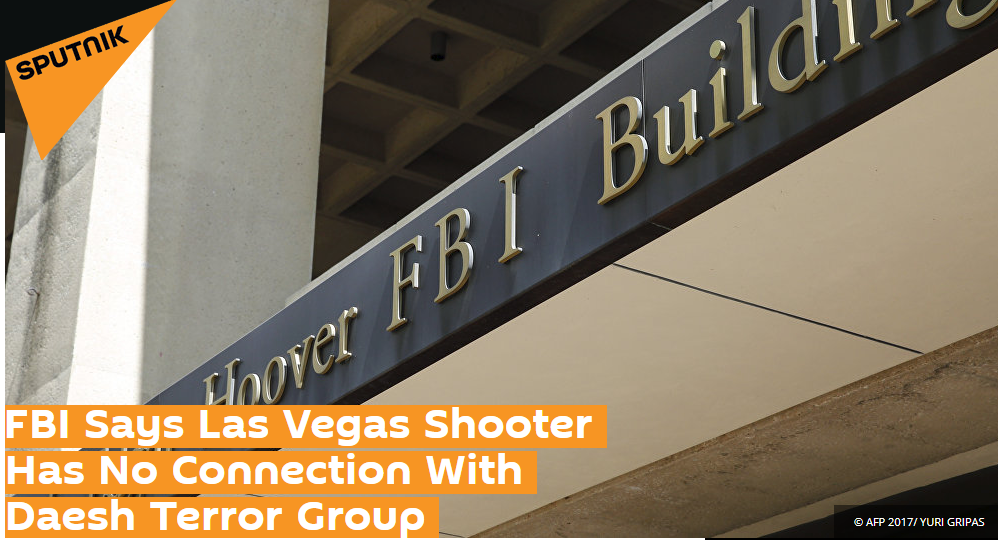 The Sputnik article itself repeatedly states what the FBI actually said: as far as they could tell, Paddock was not connected to Daesh or any other international terrorist organization.

Forbes added an update to the article, saying that Sputnik had removed the erroneous article and "replaced it with a story making the opposite claim… without acknowledging its original false story." In reality, Sputnik did not remove the article, which is still available. A correction has been added instead.

So far Sputnik hasn’t received any requests to clarify this matter, from Forbes or any other media outlet.