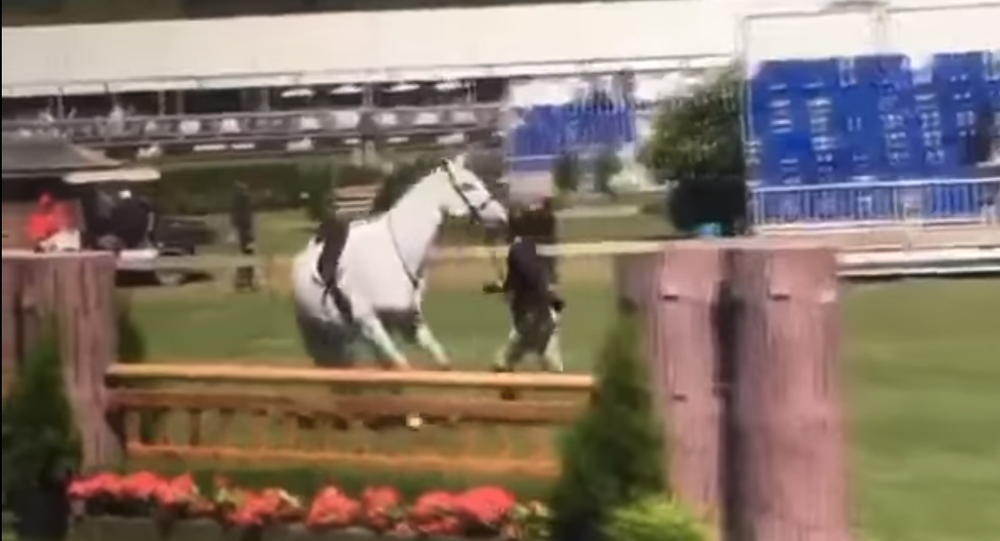 Jazz Johnson-Merton, heiress to the Johnson & Johnson multinational consumer goods producer, was filmed kicking the crap out of her horse after tumbling off it during an equestrian event.

The 36-year-old heiress was clearly caught on camera falling off her horse Joe Cool after a successful leap over a hurdle. She immediately leaped back to her feet and charged her horse, sending multiple kicks into its stomach.

The horse, being about 10 times her size, did not seem to care very much about the unbridled violence. Johnson-Merton then grabbed the reins and hoofed it out of there.

"She got up, lost her temper and tried to kick the horse in the stomach," said Chris Wynne, one of the judges who witnessed the scene. "I'm not sure she made contact, but then she trotted the horse out of the ring, in hand, and I watched her from the judge's booth go into the schooling area to see if she was going to do something, and she didn't."

He added that the horse was "probably not" hurt by Johnson-Merton's "unsportsmanlike" display of horsing around.

However, the United States Equestrian Federation (USEF) has launched a full investigation into the incident, that occurred at the Hampton Classic on September 1. "The USEF rules are in place to ensure that horse welfare and safety are protected at all times," they said in a statement at the time.

The story was broken by equestrian outlet The Chronicle of the Horse on September 19. The next day, Johnson & Johnson stock tumbled almost three percent. Wall Street stockbrokers are famously unforgiving of anti-horse violence.

Johnson-Merton is an author and former debutante, and the great-granddaughter of Johnson & Johnson founder Robert Wood Johnson. Several outlets reached out to her for comment, but she said "neigh."

Meet Gulliver, the Smallest Horse Ever

But I Was Promised a Pony: US Air Force Denies Low Flying Jets Killed Horse