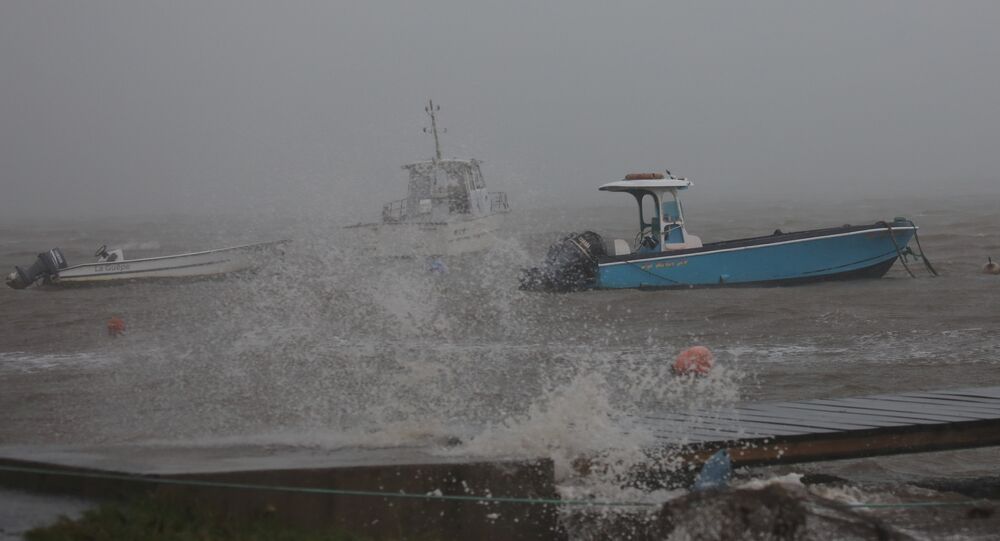 Hurricane Maria ripped through the Caribbean island nation of Dominica, tearing roofs from homes and striking fear into the hearts of inhabitants. Sputnik collected the most shocking eye-witness accounts of the natural disaster.

Roosevelt Skerrit, the Prime Minister of the island nation of approximately 73,500 people, said that his country "has been devastated" by Hurricane Maria; what people have published proves it.

This video shows the category five storm slamming into the island.

The horrendous moments when Hurricane Maria crept towards Dominica were also captured by this Twitter user.

Winds really strengthening in Dominica currently as #MariaHurricane approaches. Winds around 130 mph at the moment. pic.twitter.com/h2llhVICCk

This footage shows boats rocked by the hurricane as it makes its way to Dominica.

Another Twitter user made a video of floods caused by the hurricane.

This man recounts the hurricane destroying the roof of his home.

Tony Astaphan lost his roof!! Yikes. That says a lot about this #HurricaneMaria and how much damage #Dominica will have pic.twitter.com/VobUG2n3H4

Even the roof of the Prime Minister himself was no match for the fearsome tempest.

Thoughts and prayers with our people in #Dominica. Hit hard by hurricane Maria. The Prime Minister's roof is gone pic.twitter.com/BGwsjAvJDm

This video captured the reaction of several locals to the hurricane ripping the roof off a home.

I can only imagine what the people in Dominica are going through right now #PrayForDominica🇩🇲 pic.twitter.com/ktCptdJszS

Earlier this month, Hurricane Irma tore through the Caribbean, devastating several islands before making its way to Florida, where it caused flooding and massive power outages. At least 26 people died.

Winds picking up in #Dominica ahead of approaching #HurricaneMaria winds of 130mph currently… source; RT pic.twitter.com/cwOOlq5FzH

Earlier, on August 25, Hurricane Harvey made its way to the central coast of Texas, becoming the largest storm to hit the United States since disastrous Hurricane Katrina inundated New Orleans with an unprecedented deluge in 2005. The hurricane claimed the lives of at least 82 people, Texas officials said.

Stay Out of the Water! ‘Sharks’ Invade Flooded Miami Streets After Irma