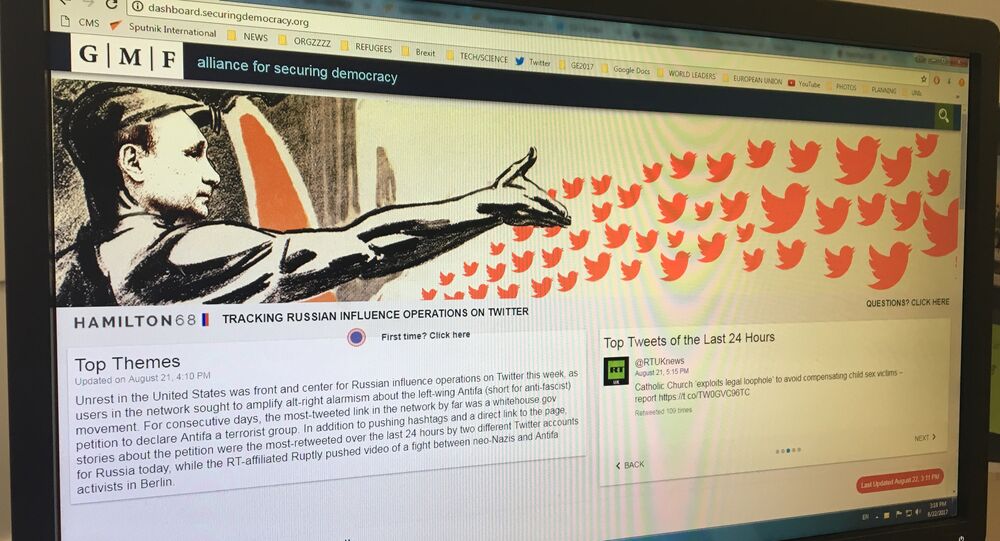 Two notable US media outlets ended up quarreling because of a new 'Russian propaganda tracker' known as Hamilton 68.

Earlier in August the US-funded German Marshall Fund’s (GMF) Alliance for Securing Democracy launched the Hamilton 68 dashboard – a website that is supposed to track Russian "propaganda" and "fake news" on Twitter.

But while its effectiveness at ferreting out propaganda appears to be questionable at best, Hamilton 68 has already managed to, albeit inadvertently, drive a wedge between two notable US media outlets – USA Today and Gateway Pundit.

USA Today also argued that on that day the aforementioned websites carried a range of stories that "reflect themes promoted by the Russian network."

Jim Hoft, founder of Gateway Pundit who previously argued that the Alliance for Securing Democracy dashboard’s real goal is to "smear websites supportive of Donald Trump and his accomplishments as Russian propaganda", was not amused by this move.

In an article titled "USA Today Smears Gateway Pundit as ‘Alt-Right Website’ Linked to Russia Because They Want Us Dead", Hoft retorted that by defining Breitbart and The Gateway Pundit as "alt right",  the "far left" are deliberately attempting to paint these outlets as political targets.

"By defining us as Alt-Right they are hoping we get the same beat-down and abuse as we’ve seen at dozens of Trump rallies this past year by the alt-left," Hoft wrote.

Meanwhile James Carden, executive editor for the American Committee for East West Accord, was cited in the USA Today article as saying that while it is "a legitimate thing" to try and determine how Russia may be influencing the US political discourse, "Russian sites on the tracker also report on legitimate stories."

"It seems that anything critical of the United States is now all of a sudden Russian propaganda. That’s a slippery slope," Carden warned.

Ex-Russian Ambassador to US Kislyak Surprised by US Efforts to Track Sputnik, RT