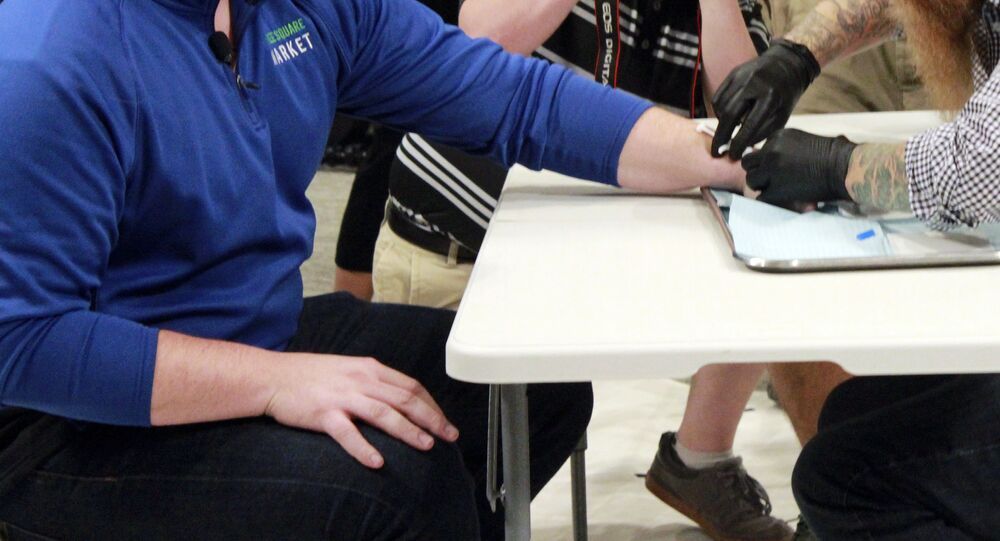 'Big Brother' & Biohackers: Who Implants Microchips Under Skin and Why?

A doctor from Siberia, Alexander Volchek, does not carry a pass to work or any other access cards because all of them are implanted under his skin. Volchek is not the first person to have decided to become somewhat cyborg: the so-called biohackers community in Russia has more than 50 people.

These biohackers say that the chips are implanted solely for convenience, and they laugh at the myths that they are now under the all-seeing eye of Big Brother.

Key to all the doors

The standard chip size is 2 by 12 millimeters; the minimum size is 1.5 by 8 millimeters. The design, which contains a ferrite core with a winding and a miniature chip, is packaged into a tube of biologically inert glass.

© Sputnik / Varvara Gert'e
Future is Now: Russian Doctor From Siberia Has 6 Microchips Under Skin
Volchek got his microchip under his skin with an injection using a large syringe with a thick needle. If desired, Volchek asserts, it can easily be extracted.

Apart from the six microchips under his skin, Volchek has over a 100 more lying at home. Some of them are analogues of intercom keys; others work on a different frequency and are capable of storing from 800 bytes to one kilobyte of information.

No more tickets for public transport

A supporter of Alexander Volchek, Konstantin Polyakov, from the city of Tyumen, is the first person in the world to pay for public transport using an implanted chip on his hand.

His story is amazing because the transport company itself contributed to the implantation of this microchip.

“The answer to the question why I decided to implant a chip in myself is quite trivial: I lost about five transport cards, and I got sick of it,” Polyakov told Sputnik.

In total, Konstantin has three chips in both hands: one for paying for public transport, the second is a digital business card; the third is for opening a turnstile at his university.

“If someone I am talking to has a cellphone with NFC support, I just touch my hand to the phone screen and my contact appears on it,” Polyakov said.

Big Brother is not watching

© Sputnik / Brankica Risti
Big Brother's Watchful Eye: Will US Spy on EU From Serbian Humanitarian Hub?
Polyakov said that among his friends only a few people have decided to follow his example because almost everyone is afraid of Big Brother watching them.

But Polyakov explained that the microchip under his skin runs on the same system as the chips used in veterinary medicine.

“Metal detectors, X-rays and MRIs do not see the chip. Nothing starts flashing or beeping at airports either,” Polyakov said.

He added that there is no health risk either as it has no effect on the body. “Chips on animals have been used for a very long time and no side effects have been reported,” he said.

According to him, it is impossible to monitor a person via a microchip. It is much easier to monitor someone through their non-cash payments, a mobile phone and their social media networks.

The implanting of microchips is currently not regulated by law in Russia. Implantations are not considered a medical operation and, in fact, are comparable to getting a piercing.

However, considering that there is no commercial chip industry, people interested in having a chip under their skin need to find like-minded people in their city who deal with microchips, or order the chips via the internet from China and Europe and then find someone willing to implant it in them.

Despite all that, the biohackers community believes that soon more people will be joining them.

Siberian Cyborg: Man Implants a Chip in His Chest, Becomes a Living Compass