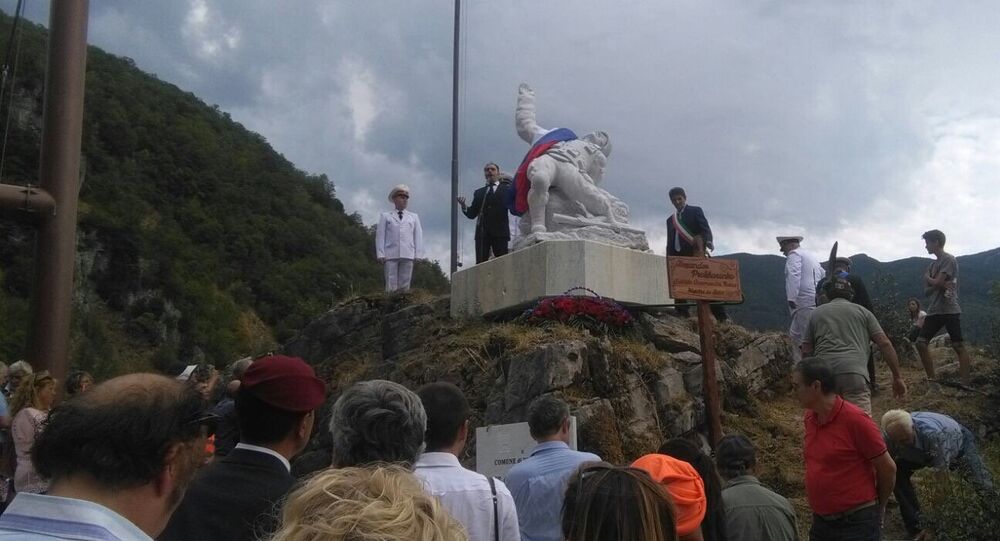 A monument dedicated to Russian Lt. Alexander Prokhorenko, who was killed in action in Syria last year when swiftly encroaching Daesh terrorists compelled him to order an airstrike on his own position, was erected in the Tuscan town of Vagli Sotto on August 6.

Marco Puglia, the town mayor, told Sputnik Italia that he was truly glad to install a monument honoring a man who chose to die with dignity rather than end up a prisoner of Daesh (ISIL/ISIS) terrorists.

"I served in the military myself, and I would like to point out that Prokhorenko didn’t simply sacrifice himself – he could’ve attempted to save himself, but he was likely carrying some secret documents that might’ve fallen into the hands of Daesh. So in order to prevent this he called an airstrike on his position," the mayor said.

He pointed out that the initiative to erect a monument dedicated to Prokhorenko was vigorously supported by people from all over Italy, not just by the residents of his city.

"The ceremony was attended by mayors of other towns in the province, as well as by representatives from Rome and from southern provinces. There was also the commander of Alpine Brigade, a general, a fleet admiral… Many people couldn’t hold back their tears during the opening ceremony," he said.

Mayor Puglia also remarked that he honestly didn’t expect that the word about the monument would spread across both Italy and Russia.

According to the mayor, the statue was carved from a single block of marble worth over 100,000 euros by a sculptor named Marc Levet, who spent six months working on it.

Initially the city authorities intended to install the monument on "the most scenic bridge in Italy," but eventually decided to place it at the Park of Honor and Dishonor because "this young man embodies the concept of honor," Mayor Puglia added.

He also stated that "with all due respect to the EU leaders, today only Russian people and the Russian President actually participate in the battle against Daesh, even sacrificing the lives of their sons" in the process.

"We regard Putin as the man who made the whole world respect him; the only man who stood up to Daesh thugs to protect mankind. For that we are thankful to the Russians and to other guys who, while possibly not being heroes like Prokhorenko, die unknown each day on Syrian front and in the world while fighting the evil known as Daesh," Puglia said.

The Park of Honor and Dishonor in Vagli Sotto now features monuments dedicated to Alexander Prokhorenko and Fabrizio Quattrocchi, an Italian soldier abducted and murdered by Islamic radicals in Iraq in 2004, as symbols of honor. It also features a sculpture of Francesco Schettino, the captain of the Costa Concordia cruise liner, who was one of the first to abandon ship when the vessel capsized, as a symbol of dishonor.

Senior Lieutenant Alexander Prokhorenko was killed in action near Palmyra in March 2016 during a battle to liberate the city from Daesh terrorists. Facing a hopeless situation as he ended up surrounded by enemy troops while performing a reconnaissance mission, Prokhorenko decided to go down fighting and called an airstrike on his position. For courage and bravery in the line of duty, Alexander Prokhorenko was posthumously awarded the title of the Hero of Russia.