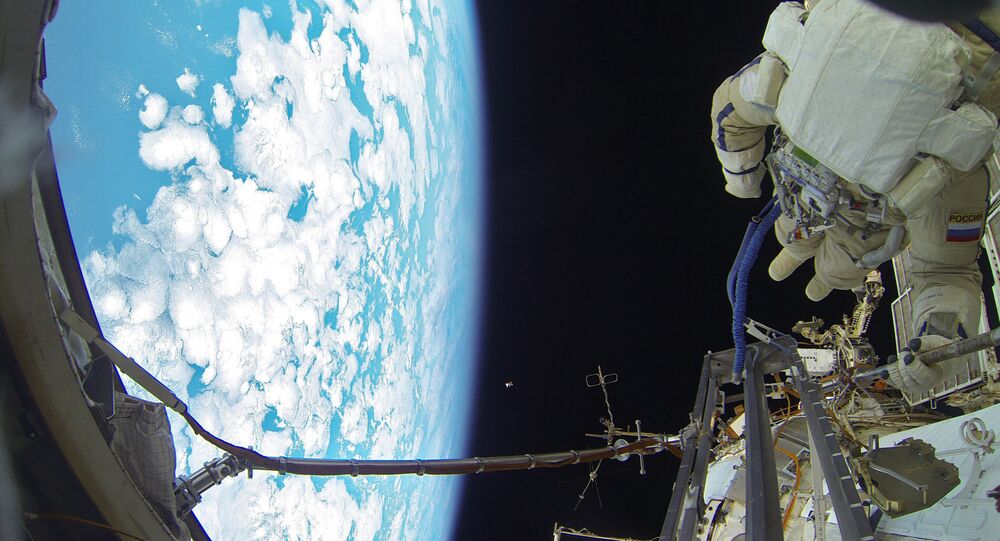 Space Tourist From Asian Country to Travel to ISS in 2019

An Asian tourist will be sent to the International Space Station as a member of the crew in 2019.

© CC0
US Cargo Spacecraft Dragon to Detach From ISS on Sunday - NASA
ZHUKOVSKIY (Moscow Region) (Sputnik) — A yet unidentified space tourist from an Asian country will be sent to the International Space Station (ISS) as a member of the crew in 2019, Russia's Rocket and Space Corporation (RSC) Energia Director General Vladimir Solntsev said Tuesday.

"The new space tourist, who is set to travel to the ISS in 2019, is being trained already. He is a national of one of the Asian countries," Solntsev told journalists at the MAKS-2017 air show.

Solntsev also said that the RSC Energia was planning to resume the flights of space tourists to the ISS on a regular basis.

"We have signed a contract with a company, specializing in recruiting space tourists. We will prepare the first spacecraft for tourists in 2019 in order to organize it [space tourism flights] on a regular basis," he said.

© AFP 2021 / NASA
The First Small Step: 48 Years Since Apollo 11 Blasted Off to the Moon
Space Adventures, Ltd. is the only company that exclusively provides an opportunity for civilians to become space tourists since 2001. In June 2015, Space Adventures issued a press release, saying that a Japanese citizen, Satoshi Takamatsu, who had been training as a member of the Soyuz TMA-18M backup crew before, signed a contract for a future orbital spaceflight mission. According to the press release, Takamatsu was expected to convey his training as a fully-trained astronaut and travel to the ISS in two to four years.

A preliminary contract on a tourist flight around the Moon has already been signed by a foreign company, but investments are still needed to prepare the Soyuz spacecraft for the journey, Vladimir Solntsev added.

"We have already signed a preliminary contract… Another issue is that we need to integrate economic and technical issues. I think it will be difficult to raise this issue without a suitable investor," Solntsev told reporters on the sidelines of the 13th International Aviation and Space Salon MAKS-2017.

Solntsev stressed that the investments were needed to modernize the Soyuz spacecraft to make it ready for Lunar orbit.

"The Soyuz spacecraft, which flies to the International Space Station [ISS] and Soyuz, which must fly to the Moon are different. This includes another refueling systems and distant radio communication systems, as well as the return at the second space speed," Solntsev said.

RSC Energia has been cooperating with the US-based Space Adventures space tourism company to secure potential clients wishing to fly around the Moon. Space Adventures reportedly priced the Moon trip at $150 million, with the launch itself likely to take place by 2020. The company has so far sent seven tourists to the ISS since 2001, with the tickets ranging from $25-$35 million. Energia has also been in contact with other partners in the United States, according to Solntsev.

The International Aviation and Space Salon MAKS-2017 is being held in the town of Zhukovskiy, in the greater Moscow Region Tuesday-Sunday.