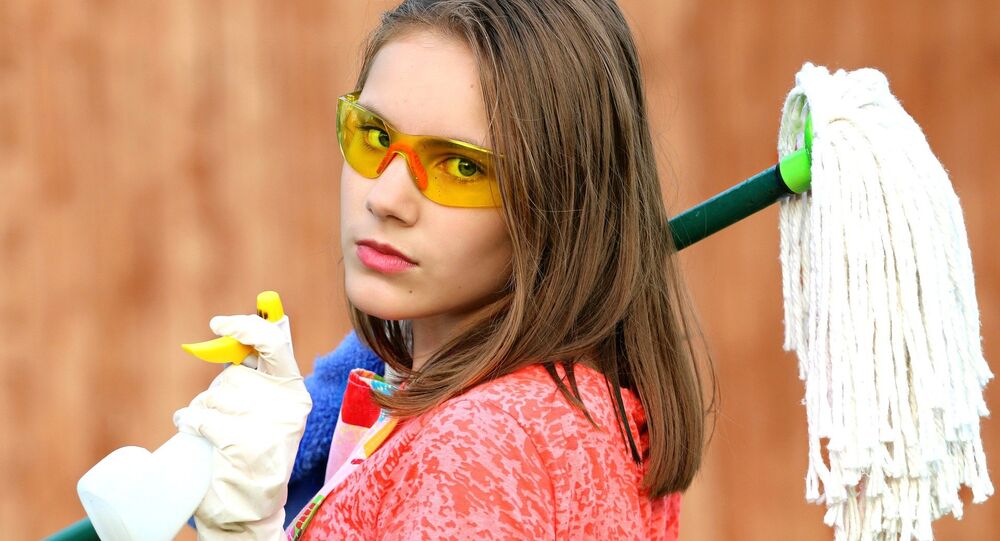 Poor diet and a lack of physical activity have long been regarded as the major causes of the world's obesity epidemic. However a recent study has identified that common environmental pollutants could also play a role. Sputnik talked to one of the authors to find out what effect house dust containing these compounds might have on fat cells.

Endocrine-disrupting chemicals, or EDCs, are synthetic or naturally occurring compounds that can interfere with or mimic the body's hormones. EDCs, such as flame retardants, phthalates and bisphenol-A, are known for their potential effects on reproductive, neurological and immune functions. But animal studies also suggest that early life exposure to some EDCs can cause weight gain later in life, and, as a result, have been called "obesogens." Some manufacturers have reduced the use of EDCs in products, but many are still ubiquitous in consumer goods. And they wind up in indoor dust that can be inhaled, ingested, or absorbed through the skin.

Sputnik got in touch with one of the authors of the study on the issue, Christopher D. Kassotis, Post Doctoral Research Associate (Stapleton Lab), who explained what effect house dust containing these compounds might have on fat cells.

"Building materials and products common to most homes (e.g. furniture, TVs, carpets, etc) are often treated with synthetic chemicals, which migrate out of the products over time and accumulate in house dust, where residents can be exposed to these chemicals on a daily basis," the researcher wrote to Sputnik.

"This study assessed approximately forty chemicals commonly detected and measured in house dust samples for their ability to stimulate the development of fat cells, using a mouse precursor fat cell model. Approximately two thirds of these chemicals were able to promote lipid accumulation by these cells and/or stimulate the proliferation of the precursor fat cells. We then assessed eleven extracts of indoor house dust samples (containing mixtures of these chemicals) and exposed our cells to these extracts, finding that even low levels of these extracts were sufficient to promote the accumulation of lipids and/or the proliferation of the fat precursor cells," he explained.

The researchers however were not so much interested in the particles of dust that make it into our bodies, but the chemicals, present in many of our consumer products, that are released by household items and accumulate in the dust.

© CC0 / Pixabay
One Quarter of the World Now Overweight or Obese
In their study, they extracted these chemicals from the dust itself, separating the chemicals from the physical dust particles, and assessed the effects of the chemicals present in this dust on cells in the lab, to try to better characterize the mechanism through which these effects might occur.

The study did not assess animal or human health directly, but only tried to better understand the underlying biology at the cellular level. Further research would need to be performed to better characterize effects in animals following exposure, or potential effects in humans living in these homes.

It is clear that humans and animals are exposed to chemicals throughout development from a number of sources, but the understanding of specific impacts on human health is, at this time, quite limited to individual chemicals resulting in specific health effects. The researchers have a long way to go in better understanding the potential effects that mixtures of chemicals may have on health – even specifically metabolic health (obesity, diabetes, etc.).

According to recent reports, the obesity epidemic has increased in the last two years in emerging and developed countries, hence there is a growing interest in understanding the factors contributing to increases in metabolic disorders (e.g. diabetes) and obesity, and the idea that exposure to various environmental chemicals may contribute to this adverse health trend has received more attention of late.

The study suggests that exposure to these types of potential metabolic disruptors, as they are called, may be more prevalent than previously realized. The researchers hope that their work provides better clarity regarding how environmental contaminants might impact health, so that consumers can make informed decisions about what is right for them, and so policymakers have the best data possible to work with.

© CC0 / Pixabay
China's Obesity Surge Hits 440 Million Residents
The researchers still have a long way to go in understanding how best cleaning practices might influence contaminant levels in the home. Currently, research suggests that dusting at least once a week, vacuuming regularly, etc. has significant effects on decreasing contaminant levels, but there is still a lot of work to do in this area.

While they have provided some mechanistic evidence that many of these contaminants can influence metabolism, they have not performed this work in an animal model or in connection with humans living in these homes – so it is much too early to suggest that there is a threat to human health from this research, the author concluded.