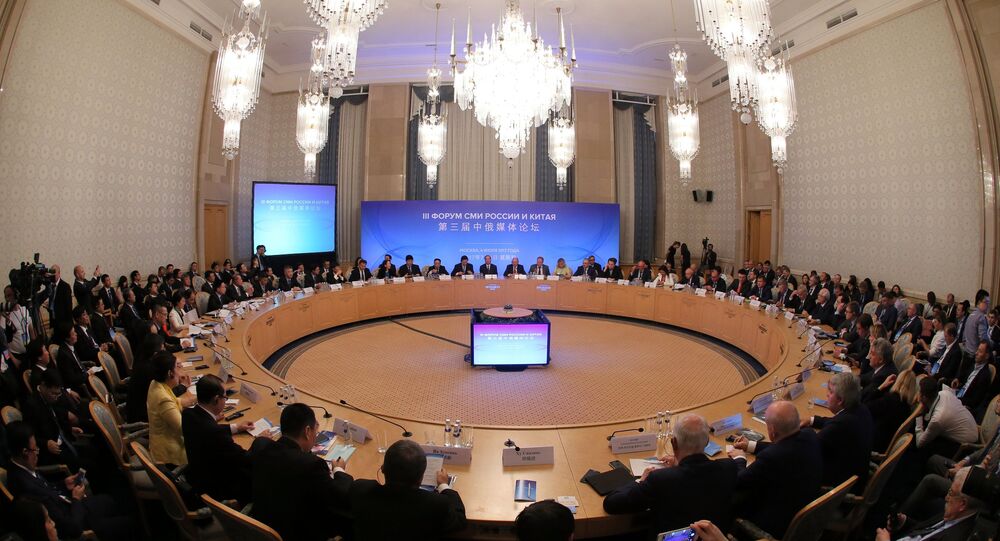 There are hundreds of joint projects between Russian and Chinese media, with only events of the Russia-China Cross Year of Media accounting for over 250 bilateral initiatives, First Deputy Chief of Staff of Russian Presidential Administration Alexei Gromov said at the Russian-Chinese media forum, held in Moscow.

© Sputnik / Aleksey Nikolskyi
Putin Awards Highest Order of Russia to China’s Xi - Kremlin
MOSCOW (Sputnik) — Speaking about the forum, Gromov noted that there had never been more impressive platform for the cooperation between leading media of the two countries, noting that Russia had not held such events with another countries. He added that the Russian and Chinese media in fact formed a unique direction for cooperation, which was carried out within all sectors of media: television, Internet, radio, book publications, cinema, animation and many others. The Russian official emphasized that the collaboration in media sector required very high level of mutual understanding and trust, which existed between Russia and China.

"In recent years our media built up completely unique relations. We started small, but at the moment the number of joint project is counted not in tens, but in hundreds. Even the plan of events for the cross-years of media is not just an official plan, it is more than 250 bilateral initiatives," Gromov said.

Gromov also told journalists, that Russian President Vladimir Putin and his Chinese counterpart Xi Jinping would be present during the signing ceremony of the agreement on the launch of Russian TV-channel "Katyusha" in China, which would be held in Kremlin later in the day.

© AP Photo / Bebeto Matthews
China Welcomes Proposals From Russia, Other States on N Korea - Envoy to UN
"We have made a long way to this [opening a Russian TV-channel in China], and we are grateful to our Chinese friends and partners for the constructive cooperation. I am sure that the representatives of the Channel One, who have a very big experience, will create a high quality and decent product, which will enjoy well-deserved success among the Chinese audience," Gromov said.

Xi is currently in Moscow to hold talks with Putin and Prime Minister Dmitry Medvedev, with topics ranging from energy and trade to strategic cooperation. On Thursday, Chinese Assistant Minister of Foreign Affairs Li Huilai said that during Xi's visit to Russia the companies of the two countries will sign deals worth of over $10 billion dollars. On Friday, Russian Ambassador to China Andrey Denisov confirmed that the two countries were preparing dozens of documents for the upcoming visit.