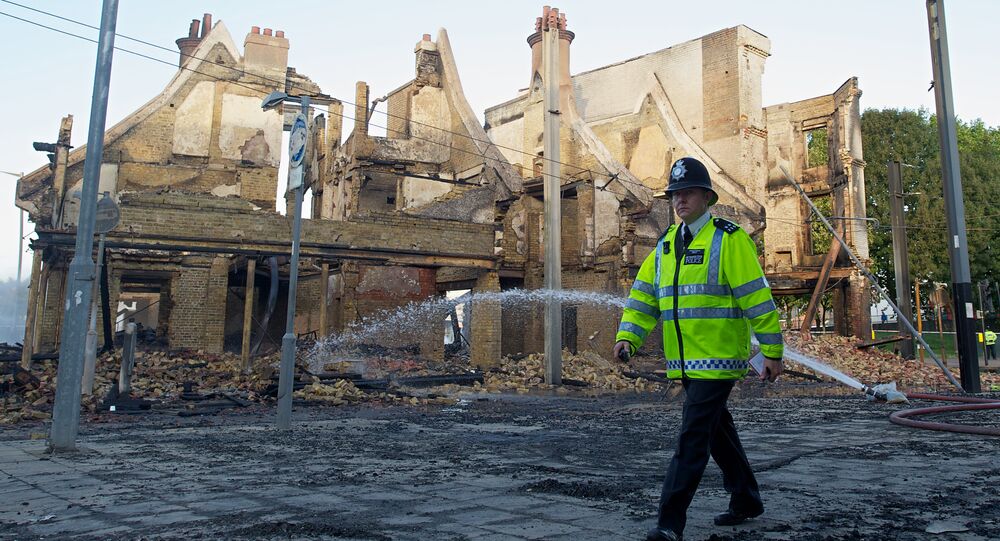 The August 2011 shooting of 29-year-old Mark Duggan during a targeted police stop in Tottenham, Greater London caused a host of economic and social tensions to unceremoniously explode, with spontaneous waves of popular unrest spreading like melanoma across England.

From North to South, flagship English cities —including Birmingham, Bristol, London, Manchester and Nottingham — were consumed by days of rage, typified by widespread looting and extensive vandalism.

​The reaction of authorities to the fiasco was to harshly penalize rioters — a year on from the strife, Ministry of Justice figures showed a total of 1,292 offenders had been jailed for their part in the troubles, with custodial sentences of 16.8 months being handed down on average — more than four times the term typically imposed for similar offences. In all, English rioters were sentenced to a combined 1,808 years.

However, the coalition government's program of cuts to the police force — then only recently embarked upon — continued apace.

Police funding – what do we need to tackle the threats we face? @DaveThompsonCC sets out the @PoliceChiefs view https://t.co/trbo8pnSmO

Writing in a blog on the National Police Chiefs' Council website, Chief Constable Thompson the funding forces receive needs to be stabilized, with "real-terms" protection for policing as a whole.

"In 2016, we saw the prison service snap under pressure with riots in Birmingham prison. We cannot afford this to happen to policing but the strain is showing from recent weeks and we'd have real challenges in dealing with something like the 2011 riots again. When things break, recovery is never quick, and in policing it takes considerable time to recruit and train staff," he wrote.

Noting that in 1974, his predecessor Sir Derrick Capper faced a sustained UK IRA bombing campaign with 6,842 police officers, Chief Constable Thompson said in 2017 he faces a modern terror threat with 6,600 officers — a number that has already fallen by close to 2,000 since 2010 and is set to fall further.

He further stated police in the modern era have a much wider mission than their forebears, from tackling anti-social behavior to cybercrime, and acting as the service of last resort for people who have fallen through the gaps of other services. The UK's population in 2017 is larger and more diverse than ever, with digital technology underpinning daily life — in this context, he said, the fall of 20,000 officers across the country is "an important" thing to consider.

Despite this shortfall, current government places mean police budgets will steadily fall in real terms in years to come, with a guaranteed shrunken government grant each year, which can only remain level with 2015 levels if police and crime commissioners increase local taxation to the maximum.  Many forces, Chief Constable Thompson said, are now using considerable reserves to maintain current staff numbers, which when spent will see numbers falling even further.

His comments chime with much popular sentiment in the wake of the June 3 London Bridge attacks. Prime Minister Theresa May, the Home Secretary who oversaw the savage slashing of police budgets Chief Constable Thompson alluded to, received much scorn from the media, public and Labour leader Jeremy Corbyn for leaving forces ill-equipped to deal with crises. For instance, Steve Hilton, ex-Prime Minister David Cameron's former policy guru, called on May to resign due to "security failures" — suggesting her spell in the Home had made the country more dangerous.

​Chief Constable Thompson also made clear counterterror strategies pursued by May's successor Amber Rudd were based on the flawed assumption such approaches could be pursued under current resources.

"The firearms commanders, casualty bureau, custody staff, body recovery teams and uniformed officers patrolling crowded spaces so central to preventing and responding to a terror attack are paid for by core police funding. Over two thirds of the policing effort after the Westminster attack was not counter-terrorism funded. This figure will be much higher following the Manchester attack," he revealed.

​Speaking to parliament June 22, Rudd acknowledged  police resources had been "pulled very tightly" in the face of four terror attacks in three months meant counterterrorism operations could not continue at emergency levels indefinitely, and a review of the handling of recent attacks would be quickly conducted "before rushing in with additional money."

The UK's assorted emergency services will no doubt be relieved the government is finally waking up to the funding issues its austerity policies have created. The Grenfell tower blaze demonstrated it's not merely police smarting from budget cuts — since 2010, over 10,000 firefighters have been axed, dozens of fire stations closed, fire engines scrapped and levels of emergency rescue equipment slashed.