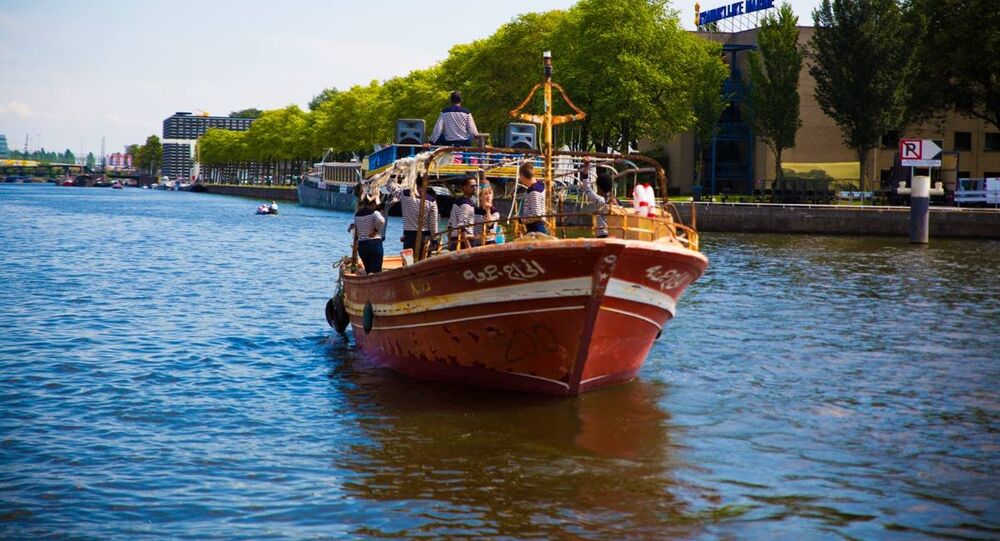 Boat tours managed by refugees in Amsterdam will tell the story of migration and bring awareness to the plight of millions of people who made the perilous journey from conflict zones in the Middle East and North Africa to Europe. Carried out in the very boats used to transport people across the sea, the tours aim to bring about inclusiveness.

"When I came to Europe I had lost everything, I had gone from working in a Five Star hotel in Damascus, the capital of Syria, to traveling for months on end to reach safety in Greece," Mohammad told Sputnik.

​Mohammad Al-Masri is a refugee from Syria; he left Damascus and traveled to Turkey in 2015 along with millions of others, as he manged to survive the perilous journey by sea to Greece. He then ended up traveling to a small village in the Netherlands called Ter Apel, from there he went on to Amsterdam.

Recalling the time in Syria when he watched the Egyptian movie Hammam in Amsterdam, Mohammed felt like he knew the city even before he arrived.

"After watching that film, I felt like I knew the place already. It was home to me," Mohammad told Sputnik.

It was at this stage that he made contact with artists and entrepreneur Teun Castelein, founder of Rederij Lampedusa boat tours. Mr. Castelein had the idea of bringing awareness to the plight of refugees and decided to run boat tours with refugees as the guides, as it was the easiest way to make a statement and to bring awareness to the issue of immigration.

The result was the resurrection of two boats, named Hedir and Meneer Vrijdag, once used to transport refugees to Europe from Turkey.

"We have all read in the media about refugees, they were painted in a dark light, however I saw it as a huge humanitarian issue and I felt I had to do something; it had a very personal agenda. I have an entrepreneurial spirit and that is how the idea came about," Mr. Castelein told Sputnik.

The tour group will run daily cruises from April, each lasting one hour and costing US$20 per person. They will take passengers through the city's world-famous waterways.

Mr. Castelien hopes that the boat tours will bring to the forefront the plight of refugees and migrants in Europe, in what he considers a bold statement as well as an artistic outlet.

"If you put one of these boats onto the canal, what will happen practically with your audience? The easiest way to make a statement is to put it in your face," he said.

Mr. Castelein and Mohammad are now friends, united by a common cause and spurred on with the aim of achieving a better tomorrow.

"We are all friends so, we do not want to make them [refugees] out to be victims like the rest of the media. The boats are a symbol of beauty. The history of our city has been one of migration, great philosophers, writers and artists have all been immigrants," Mr. Castelein told Sputnik.

For Mohammad this journey is more than a boat tour, it's about raising awareness and being inclusive.

"I hope that people living and visiting the city will see that it is all about inclusion and that it is far better to have an inclusive society then one which aims to exclude," Mohammad told Sputnik.

These boat tours are just the start of Mohammad's new life, he has dreams of one day owning his own hotel, a social enterprise project which will allow every person staying to do so for free.