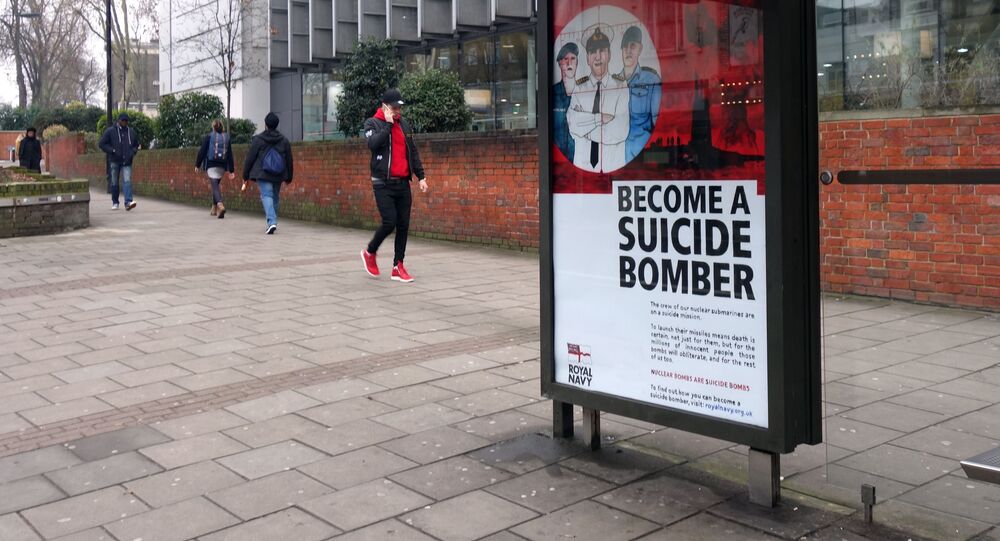 Spoof suicide mission posters are being sneaked into advertising spaces in London spelling out the reality of nuclear war if Britain were to lose. The posters appearing on bus stops in the UK's capital, replicate British Navy recruitment advertisements but with a very different rhetoric.

"Become a Suicide Bomber," says one with a picture of a nuclear submarine in the red painted in the background.

"The crew of our nuclear submarines are on a suicide mission to launch their missiles means death is certain, not just for them but for the millions of innocent people those bombs will obliterate, and for the rest of us too."

New @RoyalNavy Trident recruitment posters I designed have been appearing all over London. More details at: https://t.co/NaBpf29y9k pic.twitter.com/f3ITnYdwbC

The artist behind the posters, Darren Cullen, is no stranger to producing thought provoking pieces with his Pocket Money Loans creation recently installed at Banksy's Dismaland.

"I'm interested in the way we make a distinction between Western states committing atrocities and terrorists committing atrocities, as if there's something more moral in removing people's heads with 10,000 pound [4,500 kilograms] bombs as opposed to chopping heads off with a knife," Cullen told Sputnik.

"When I found out that the crew of a nuclear submarine are unlikely to survive a nuclear war it seemed like an interesting way to talk about Trident."

"One of Trident's engineers resigned a while back because he saw it moving away from being a deterrent to a position of winning and that's why Britain has a first strike policy refusing to rule out using nuclear weapons in war. This isn't in the public conscience, I don't think."

Cullen initially fancied a career in advertising before he began parodying propaganda with his own art.

"There's something about using the language of advertising to point out the hypocrisy involved in the rhetoric used by military recruiters to try present military service as heroic — but the recruitment adverts don't reveal the brutal nature of what soldiers have to witness," he told Sputnik.

Have you thought about joining the #Reserves? Find out more about the benefits…#RoyalNavy #Army #RoyalAirForce pic.twitter.com/r6Yc9bwyAD

The art work, Become A Suicide Bomber (2017), is published on spellingmistakescostlives.com. Anti-advertisement activist group, Special Patrol Group is responsible for sneaking the posters into bus shelters across London.

Here's another Trident poster I drew a little while back.
Large version: https://t.co/QmnyR9mn85#scrapTrident #CND #nukes pic.twitter.com/0nhyW3GE0r

Darren Cullen intends to continue using poster art to prick the consciousness of the public and present an alternative message with his own artistic response to advertising rhetoric.