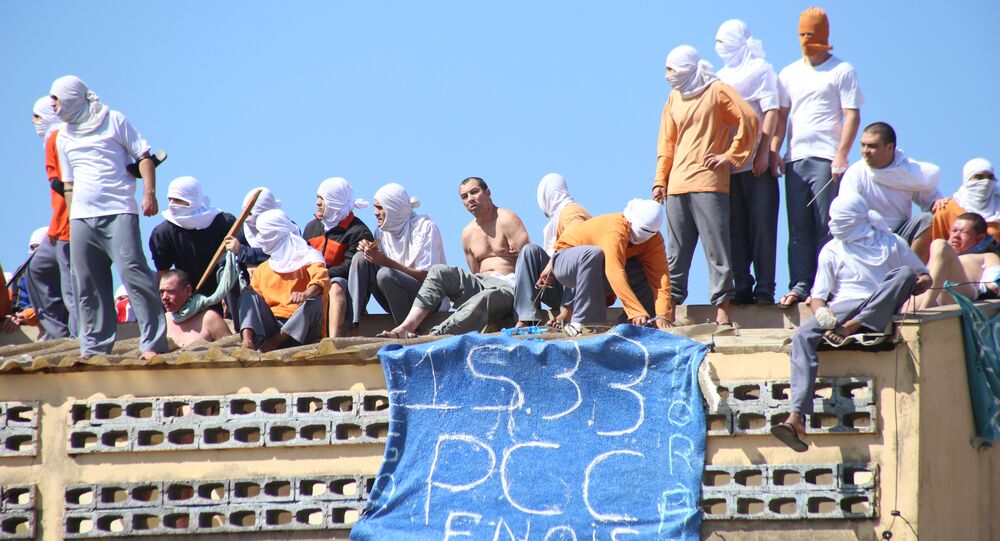 Another Prison Riot in Brazil Kills Four; Death Toll for Past Week at Nearly 100

Four people were killed in another prison riot in Brazil January 8, the country's third in a span of seven days.

In the latest incident in the Desembargador Raimundo Vidal Pessoa public jail Manaus, Amazonas, three inmates were decapitated and one was strangled, according to the state's Penitentiary Administration.

The riot was contained within about five hours, TeleSur reports. The facility had only reopened a week before as an emergency measure to relocate about 300 prisoners from other facilities in the state over fears of gang violence. The Pessoa public jail had been closed in October because of poor conditions.

Nearly 100 prisoners have lost their lives this week, often in gruesome ways. Up to 60 were killed January 1 in the Anisio Jobim Penitentiary Complex, also in Manaus, when violence flared between rival gangs, and an unknown number escaped. Days later, at least 33 were killed in the Monte Cristo Penitentiary in Boa Vista, Roraima state.

The killings have been particularly cruel, with reports of hearts and intestines ripped out and headless bodies being tossed over prison walls.

Both of the earlier riots are thought to involve the Sao Paolo-based First Capital Command (PCC) gang. In the New Year's Day riot in Manaus, it is thought that the PCC clashed with local organized crime syndicate the North Family, who are thought to have been acting on behalf of Rio-based PCC rival the Red Command (CV). An apparent truce between the two massive illegal drug operations is thought to have fallen apart last year, TeleSur reports.

The PCC is trying to push into the CV's Rio heartland as well as the Amazon region, the Guardian reports, in an effort to take control of cocaine-smuggling river routes. The CV has been allying itself with smaller gangs like the North Family to help take on the PCC, called Brazil's biggest organized crime syndicate.

In the second riot in Monte Cristo, the PCC did not appear to attack a rival gang, but instead simply go on a killing spree.

"This is a national crisis," Uziel Castro, security secretary of Roraima, told AP after the event.

"There was no confrontation, this was a killing spree," said Castro. "It was barbaric. Some were beheaded, others had their hearts or intestines ripped out."

Castro also reported that there were no guns involved in the massacre and that none of the 1,500 inmates — in the prison built for more like 700 — had escaped.

The number of prisoners in Brazil has doubled in the past 10 years to 622,000 in 2014, leading to chronic overcrowding and human rights concerns.  Harsh drug sentencing and slow judicial processes are generally blamed for the spike, TeleSur reports.

The country's government announced plans last week to build more prisons, the same day a report came out announcing that 372 inmates had been killed in prisons in