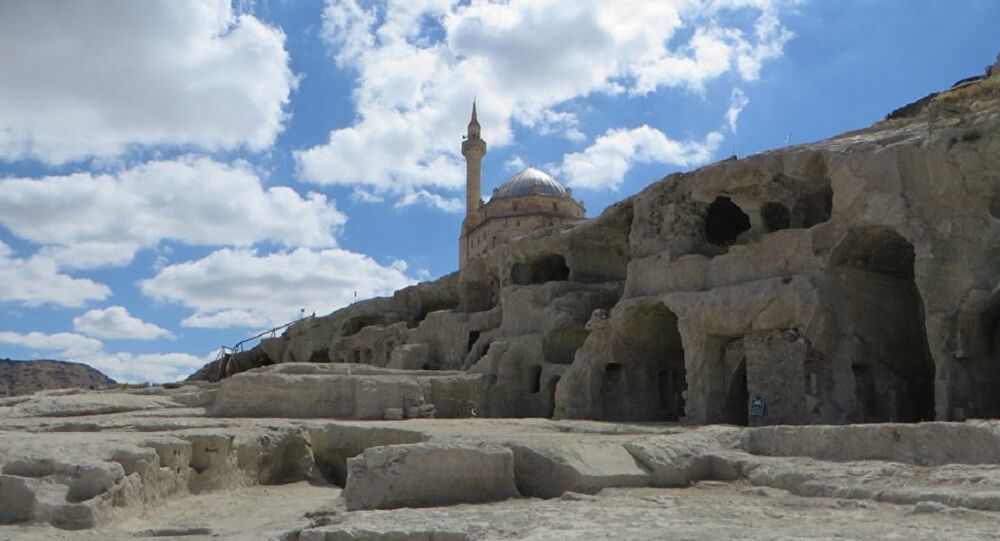 Turkey Opens Underground City Never Before Seen by the Public

The underground city of Nevsehir in the central part of Turkey was discovered in 2014 after excavation. It will soon be opening its doors for tourists from all over the world. RIA Novosti correspondent Alena Palachzhencko visited the city and met with archaeologists working on restorations.

© Photo : Pixabay
Echo of the Past: Ancient Cliff Carvings Discovered in China
Nevsehir is the capital of the province where the world-famous historic district of Cappadocia is situated. Nevsehir in itself has never been a tourist destination. Many tourists who come to Cappadocia usually do not stop here but go a little further, into the depths of the bizarre tuff landscape such as the Goreme, Urgup or Gülşehir.

Nevsehir, in general is a fairly traditional modern Turkish city. It is friendly, green, hilly and quiet. It also has some tourist attractions such as the Damat Ibrahim mosque complex which has now been turned into a public library.

However, there are reasons to assume that in the near future, the city will have to think about taking in a large number of visitors because the largest underground city in the world is situated in the heart of Nevsehir.

“It is not right to call this city underground because it is not so much inside the earth as it spreads on the mountain itself and it has deep individual rooms, galleries and numerous tunnels inside the zone,” head of the excavation, archaeologist Ali Aydin told RIA correspondent.

The correspondent, after climbing a little higher reached the top of a large mountain which was dotted with caves, stone tiny rooms like cells from which the upper layer had been removed.

Standing on top of the mountain, the correspondent spoke to another archaeologist who spoke about how the ancient town was discovered.

“In 2012 across Turkey a program called Urban Renewal was launched. Its goal is the reconstruction or complete replacement of old houses which lack seismic safety. As part of the program in 2014, demolition of the old poor-quality buildings in the poorest quarters started during which the ancient structures were discovered,” archaeologist, Semih Istanbulluoglu said.

He further added that after the intervention of scientists and archaeologists, the site was closed down and the restoration processes began.

Frescos of an ancient church

In the town one of the ancient Christian churches is completely filled up with earth and stones. The archaeologist and the RIA team entered the cave to examine it and saw barely visible delicate frescoes depicting various saints on its walls.

“People lived here from the Byzantine era and several churches have survived. The most surprising is a single-nave church of the XIII century but it has not been preserved at all and hence we are not touching it right now as we await a commission from the Istanbul conservation and restoration laboratory, which will tell us about its value,” Semih said.

He further added that it is quite similar to the church of Tatlaryn (V century AD), which is in Gülşehir and famous for its unique frescoes. Hence, it is possible that the same architect built both churches.

The underground tunnels are equally impressive as they are flat, narrow and have an estimated length of 7 kilometers; however, only 700 meters have been restored.

Today it is probably the only object that is completely ready for tourists and even has good lighting installed for better visibility.

In general, the entire territory of the "new-old" city is a wonderful complex, the uniqueness of which is that among other things it is located in a large modern city. This may be attractive and quite convenient for tourists.