Real-Life 'Shangri-La' in Pakistan Where the Happiest People Live

Today, people go to extremes to live a healthy and long life. Organic diets, gym memberships, vacations in the sun, etc. are all aimed to improve one’s health and wellbeing. At the same time, there are places in the world that seem to belong to another dimension, as people there live long and are free from cancer, diabetes, heart problems etc.

Aneela Rashid - One such place is Hunza. It is a mountainous valley situated in the northern part of Pakistan in the Gilgit-Baltistan region. The valley is home to Hunzukuts, ethnically known as the Burusho people.

A popular belief among some Burusho clans is that they are the descendants of the Macedonian soldiers who came to the region with Alexander the Great's army in the 4th century BC.

These people, living in a secluded region of the world, practice simple lifestyle habits which allow them to enjoy excellent overall health and lifespans of up to 125 years.

Hunza is popularly believed to be the inspiration for the mythical valley of Shangri-La in James Hilton's 1933 novel Lost Horizon. 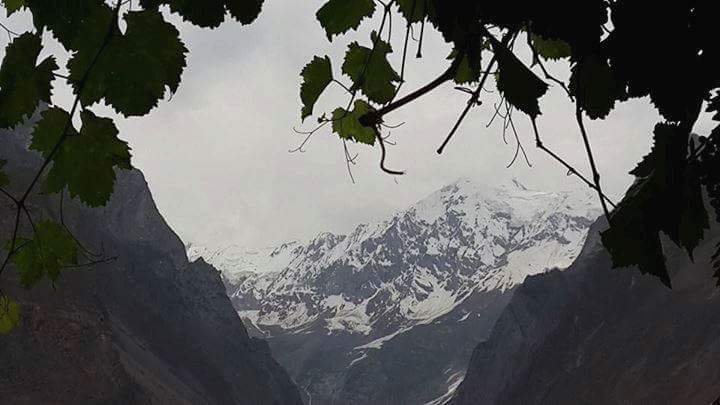 Similarly, Dr. Jay M. Hoffman was another famous researcher who took a trip to the Hunza Valley to study ethnic longevity more in depth. His findings were published in the 1968 book “Hunza — Secrets of the world’s healthiest and oldest living people.”

Hunza valley is famous for several reasons one of it being the fact that the valley is home to some of the highest peaks which rise above 6,000 meters.

Today the valley is a major tourist attraction in Pakistan and many domestic and foreign tourists travel to the region to enjoy the picturesque landscape and stunning mountains of the area. Despite the popular mainstream claims, it is now relatively safe to travel to the north of Pakistan as the army has cleansed the area from the militants.

According to Spirit Science Journal, Hunza people are considered to be among the happiest human beings on Earth with near-perfect physiology. “Heart disease, cancer, diabetes, obesity, blood pressure issues and other common plagues of the Western world are almost unheard of among the Hunza.”

Kashif Maqpoon is a young man from Hunza who is currently working in Lahore, another city in Pakistan.

In an interview with Sputnik, Kashif shared his story, “I was born in Hunza and I lived there for 18 years. Right now I am 20. It is true that the people of Hunza live up to 100+ years. The main thing which makes Hunza people live long is food, water and lifestyle. We use 100% organic food which we produce ourselves. Also we consume a lot of natural dry fruits.”

What Hunzakuts don’t do according to Maqpoon is use market oil. “People rarely use oil and food items from the market as they mostly use food which is pure and organic from their own farms.”

However, the fountain of life which is clearly one of the most important things that keeps the valley people young and fit is the Hunza water.

“Hunza water is basically the water that we drink throughout the year. This water comes directly from glaciers and sometimes it is even smoky in color, we call it ultra-glacier water. In this water there are lots of minerals which are the main reason for Hunza people’s long lives. The water has been tested internationally and lots of British scientists have researched it,” Maqpoon explained.

Another reason for people’s wellbeing is that they are hard working people who have their own farms and cattle so they work hard throughout the year. However, despite their close to nature lifestyle, the people of Hunza have a very high literacy rate and almost everyone can read and write.

Anum Malik who has traveled to Hunza and shared her experience with Sputnik said that, Hunza has gained a lot of attraction in the past couple of years with local and foreign tourists.

“I went with a bunch of friends about two years back and absolutely loved it, not only was it beyond stunning but the people there are not what you would expect from the locals up north.”

She further said, “We played football with a bunch of local kids and they not only kicked our butts, but they were all big Messi fans sporting proper jerseys and game shoes! They even make their own alcohol, famously known as Hunza Water, which is like wine.”

Eliza Khosa, a talented artist who has also visited Hunza recently and stayed there for a prolonged time shared her experience.

“I noticed that men and women alike were involved in terrace farming on a large scale and included a lot of organic vegies in their meals and also consumed lots of meat. I saw a variety of fruit trees everywhere, including apricots, apples, cherries, grape vines etc. Most fruit was plucked to be made into jam and I saw lots of it being sun-dried on every single rooftop. They store it by drying it so that it can be later consumed to keep them warm in extreme and harsh winter season.”

The use of apricots by Hunzakuts has been mentioned in various scientific publications also. They eat large amounts of fruit which is rich in Amygdalin (vitamin B-17). In some publications, Amygdalin has been widely mentioned for its anticancer properties.

Another important detail of their lifestyle is that once a year for a period of up to two months, Hunzakuts go on a fast during which they refrain from their daily diet and consume very little food and a lot of dried apricots and apricot juice.

It is allegedly an old tradition that they still follow and scientists agree that it contributes to their amazing health.

Based on this tradition and absence of cancer among Hunza inhabitants, medical researcher Ernst T. Krebs came up with a hypothesis that apricot seeds could be used as an alternative cancer treatment.

“The treatment, called laetrile, was banned by the FDA in 1971 despite its proven efficacy. However, the natural source of B17 (amygdalin) is still legally available in the form of dried apricot seeds,” according to Undergound Health Reporter journal.

Apart from their diet, Hunzakuts live an active life. During her visit to Hunza, Eliza saw that people burn fat & calories by walking and climbing along very rugged terrain every single day to go about their business. Since Hunza is a very mountainous region this daily exercise helped them maintain their physical fitness.

Eliza further said that, “I heard they don't sell their land to outsiders and because they are a closely knit society, every permanent resident knows the other resident. They generally have good terms with their neighbors and therefore maintain peace and zero crime. With a high literacy rate and almost no crime rate these people seemed jolly and appeared to be generally satisfied with their living conditions.”

It further points to the fact that healthy mind equates to a healthy body. Keeping good relations with other members of their society and maintaining peace promotes one’s wellbeing.

Ali Shah, another Hunzakut who gave Sputnik a comment said that his “father’s sister is 100+ and she is still doing pretty well for her age!”

Even though, Hunza is a piece of paradise on earth which is a must visit for nature lovers and anyone who wants to experience the tranquility of life in the mountains, it has seen some effects of modernization in recent years. The people have access to foreign food products, oil; cosmetics etc. which are actually worse in quality as they aren’t pure and that has resulted in Hunzakuts health deterioration.

Nonetheless, there are still many centenarians and a few supercentenarians living in the valley and their secret to healthy, prosperous life is alive with them. Travelers who have lived and worked with the Hunzakuts are unanimous in praising their general charm, intelligence, and physical stamina.