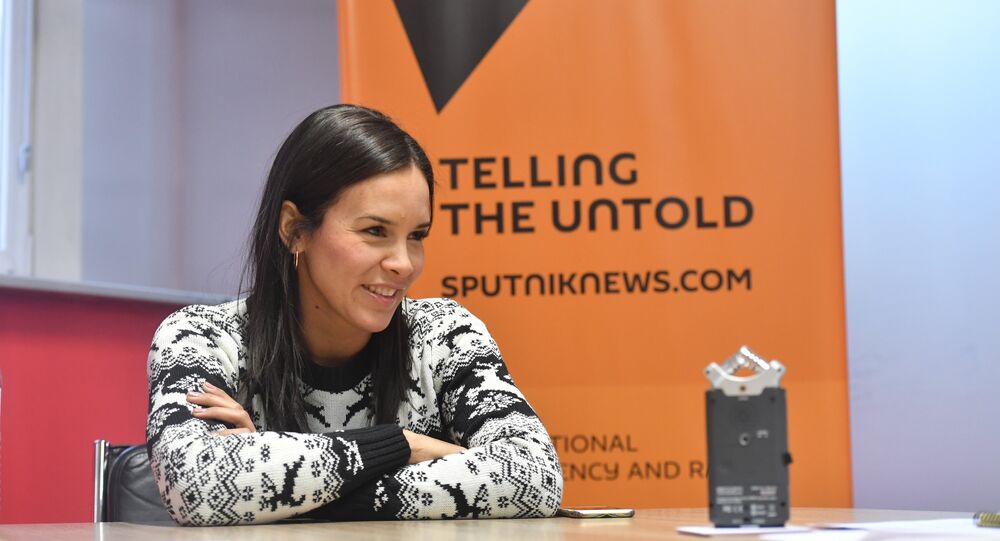 Alejandra Benítez an attractive Venezuelan professional fencer, who also held the post of Minister of Sports under Nicolas Maduro’s government, spoke with Sputnik in an interview about why she moved to Moscow and what is the aim of her social foundation, BenitezVEN.

Talking about residing in Moscow, Benitez told Sputnik Spain, “I am here for the sake of the sport. I train with the Russian national team and they have a very high level of training. These girls are double Olympic champions. Yes, it is difficult because of the weather and the distances but this is the best place to train.”

Benitez has been involved in fencing for many years now and said that the sport primarily teaches discipline, solidarity and teamwork.

“This is very important, because sport helps to reason, to concentrate and to think strategically. In recent years many serious politicians and prominent figures of world social movements have emerged from the sport of fencing. After all, strategy and policy are closely linked,” Benitez said.

From Sports to Politics

Benitez gave examples of sportsmen turned politicians, such as Valentina Vezzali, who is a member of the European Parliament. Ibtihaj Muhammad who became the first American woman to participate in the game wearing a hijab and now she protects rights of Muslims in the United States.

​Apart from sports, the athlete is deeply involved in politics and social work as well. She has been involved in the youth movement at the United Socialist Party of Venezuela [Juventud del Partido Socialista Unido de Venezuela] for the past 16 years.

“Thus, we became part of the political bureau of the youth party and therefore worked directly with Commander Hugo Chávez. I, of course, was responsible for the sport in this office,” Benitez said.

She further said that Chavez had a special relationship with sportsmen, as he had a lot of respect for athletes. “In 2010 I was invited to become a candidate. Chavez called me and said, ‘You are on the candidate list of Caracas.’ It was a difficult task — to be a deputy from the capital,” Benitez told Sputnik Spain.

​She also pioneered the movement of athletes from the National Sports Institute [Instituto Nacional de Deporte]. Later she received a call with a proposal to become part of the political command of President Maduro as Minister of Sport.

Talking about the disqualification of Russian athletes from the Rio 2016 Olympics, Benitez called it a “politically motivated decision as WADA is controlled by the US.”

“It was all a setup. Russia had one of the best teams in the history of sports. Until now the US had the hegemony but Russia along with China has slowly started to displace the US. But for me personally, the greatest injustice was disqualification of the Paralympic team — this was the worst tragedy in history of the Olympic sports,” Benitez said.

Bilateral relations of Venezuela and Russia

Looking at the relations between Russia and Venezuela, the athlete said that Russia has given a lot of support to Venezuela.

“This relationship has given a lot to Venezuela. International attacks have started to weaken because everyone realizes that we have a great ally and Venezuela will not be left alone with its oil. It realizes that it has a political, military and moral support,” the athlete said.

© Photo : Alejandra Benitez
Alejandra Benítez near the Monument to the Russian soldiers of the First World War

She further spoke about her foundation called BenitezVEN which is aimed at social welfare and providing children with means and opportunities to start their career in fencing.

“Fencing is a rather expensive sport and many children simply could not pay for a class and their dreams were shattered. It bothered me. Then I had the idea to create a system of loans and I began to gather international experience in this field. Then we started to spread our material to families or schools for fencing,” the athlete said.

The aim of her foundation is to give each child chance to prove himself and provide every mother with an opportunity to raise a champion.