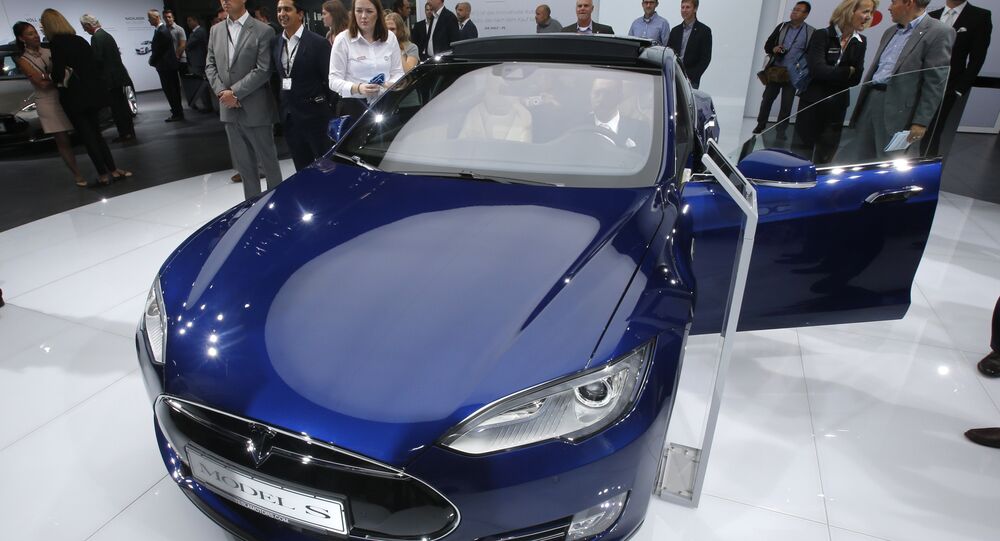 Self-driving vehicles are one of the key global trends of the coming decades. Hundreds of millions of dollars have been invested in their production, with companies such as Mercedes, GM and Uber investing heavily. How will the arrival of automated cars lead to the fourth industrial revolution?

© Photo : Youtube/Tesla
Hands Off the Wheel: Tesla's Autopilot System Drives and Parks Car Itself
Recently giant tech Apple, which for over two years has been suspected of working on a secret self-driving vehicle project called Titan officially made a statement suggesting that their vision for use of automated systems included transportation as well.

According to the Financial Times, Apple confirmed that the company is in the process of establishing an autonomous systems that could change the future of transportation. The company also pointed to the “serious social benefits of automated vehicles” in the future.

CEO of Tesla Elon Musk promised to release its first automated car within the next three years. Tesla already has a car which can be driven either manually or using an autopilot.

Another tech giant, Google has also made considerable progress in this sphere and according to experts, within the next 10-20 years people around the world will be using self-driving cars.

The dawn of the unmanned vehicles will have multiple benefits for society and economy. Some experts are going as far as saying that autonomous cars will completely transform the economy.

Their arrival will be part of a new wave of automation and the beginning of the fourth industrial revolution. It will be based on the development of artificial intelligence systems.

© Wikipedia
Drones for Peace: How Nikola Tesla Envisioned the Use of Unmanned Vehicles
However, as every revolution upheavals existing systems, the automated car will be no exception. According to some estimates, self-driving cars will destroy up to 4 million jobs for drivers all over the world.

These changes will affect freight traffic as well. Recently one Russian transport company announced that by next year Russia will start using self-driving vehicles for the transportation of goods.

The head of the Federal Road Agency advised truck drivers to consider pursuing a different lone of work because in 5 years they will be replaced with self-driving trucks and drivers won’t be needed.

Such cars will give rise to another phenomenon, “auto pilot car sharing.” Authorities in Moscow have already announced that 2017 they will launch automated tests of rental cars — to test the reliability of this technology.

© AP Photo / Gene J. Puskar
A group of self driving Uber vehicles position themselves to take journalists on rides during a media preview at Uber's Advanced Technologies Center in Pittsburgh, Monday, Sept. 12, 2016.

These automated cars will travel several hundred thousand kilometers and rental of them will be possible by 2018.  These cars will be taught to distinguish between traffic signals, obtain data on road conditions and allow pedestrians to cross.

YouTube/All About AMAZING
Google Co-Founder’s 'Flying Car' Reportedly Caught on Camera in California
Currently auto insurance is one of the most profitable types of business insurance but with the development of the unmanned vehicles human error will be eliminated and this will hurt the insurance business as self-driven vehicles will significantly reduce accident rates on roads.

Only in the US alone, unmanned vehicles will save more than $190 billion a year for companies. Whereas, the income of American insurance companies will decrease from $200 billion to $40 billion by 2040.

Self-driving cars will reduce the number of accidents on roads and in turn this will reduce deaths and injuries.

The new cars will also improve road traffic allowing to get rid of the traffic jams. Travel time to work will be greatly reduced and large cities, in turn, will become more comfortable and convenient for living and doing business.

The concept of car sharing will further improve the quality of life in big cities as it will empty hundreds of thousands of parking spaces and garages. All of that free area will provide with space for building office buildings and residential areas.

Furthermore, delivery of cargo without drivers will significantly reduce the final price on a range of goods. According to Nissan estimates, the development of unmanned vehicles will annually add 0.15% to the annual GDP growth rate in Europe and by 2050 will bring the economies of EU 17 trillion euros.

According to Nissan, “We are on the verge of social and economic revolution.”

Evolution of Luxury Cars Over the Last 100 Years