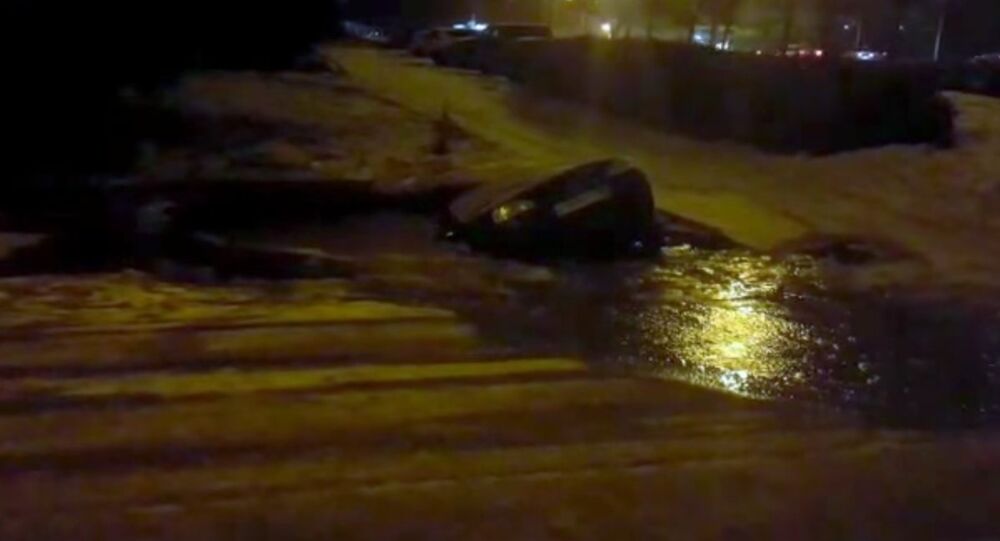 For many people their car is more than just means of traveling. It is their investment and comfort; people get attached to their cars, some even give them names. Now imagine your favorite car disappearing right in front of your eyes without you knowing where it went!

In Russian city of Ufa, a pit filled with water appeared in a yard of one of the houses.

A parked Lada Kalina fell right into this water pit. At first only the rear part of the car disappeared but after some time, residents of the house saw the whole car sinking until it was gone completely.

A man came out running in shock toward the scene and called emergency services. A group of people had gathered around the ditch by the time the services arrived.

Hopes of taking the Lada out were high. But the worst was yet to come!

Emergency services started pumping out the water from the six-meter ditch. It took them all night to empty the ditch but when they did, the car was missing! It wasn’t in the ditch, it had disappeared.

“Employees of the service Ufavodokanal are saying that the car has most probably sunk under the groundwater and a ditch was formed due to the caverns,” owner of the missing car, Larissa Krasheninnikov, told a local channel.

However, the witnesses of the event have different ideas about where the car went off to.

“The Kalina was never found. Perhaps the Satan took his child back to Ad [hell]. The ditch was covered with sand and the owner has been promised a new miracle of the Russian automotive industry,” one of the witnesses, Vladimir Kobzev, said.

Meanwhile the car owner plans to file a lawsuit against Ufavodokanal. She won’t receive any payments from the insurance company, however, since the car wasn’t insured.

Artificial Intelligence Will 'Transform' Society or 'Destroy' It - Hawking

Speeding Driver Gives a Ride to Policeman… on Car Bonnet