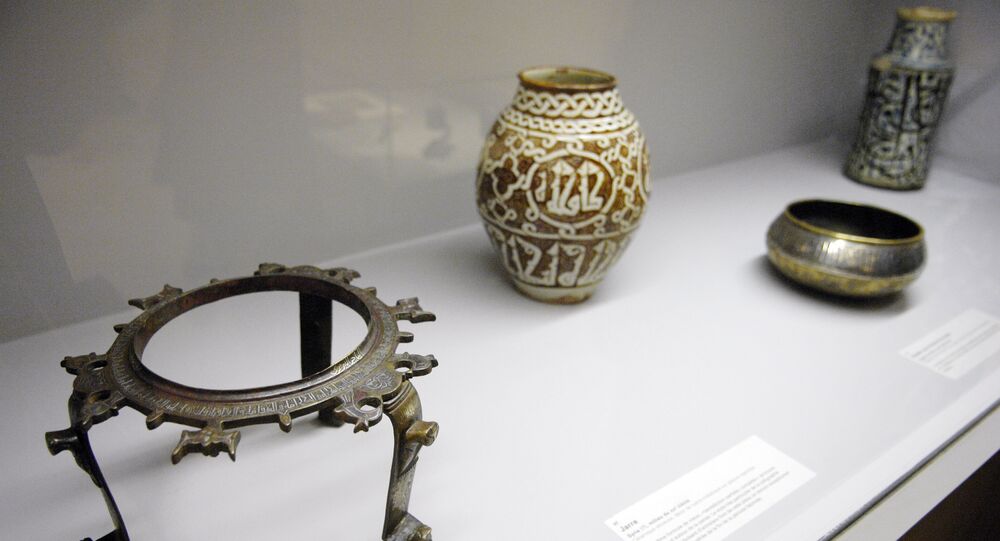 Italy returned 30 cultural ancient Persian cultural artifacts to Iran that were seized from smugglers in Italy. The historical items include early Islamic pottery and jewelry. Sputnik Iran spoke to the director of the National Museum of Iran, Dr. Jebreil Nokandeh, in an exclusive interview.

© Wikipedia / Omid Jafarnezhad
Talk About Old Age: Iranian Museum Displays 7,500 Year-Old Mummified Skeleton
The artifacts were initially transferred to the Iranian Embassy in Rome and then transferred to the National Museum of Iran. Dr. Jebreil Nokandeh, told Sputnik that, “In 2008, Italian police found out about the illegal importation of ancient artifacts into Italy. These artifacts appeared to have Eastern origins. To clarify the situation and identify these ancient items specialists of the National Museum of Oriental Art in Rome were brought in.”

He further said that the specialists examined and studied the collection of 30 artifacts and concluded that most likely these items were ancient Persian cultural objects and immediately reported back to the Iranian embassy in Rome.

After that was established, Iranian experts from the organization of cultural heritage, tourism and handicrafts were called to Italy to study the collection.

“After painstaking research by our cryptologists, it was revealed that a number of these artifacts belong to ancient Persian culture, dating back to the 2nd millennium BCE,” Nokandeh said.

“The ‘youngest’ of objects belonged to the Safavid dynasty. Most of the other historical monuments are objects from the early Islamic period (Mongol dynasty rulers Hulaguid),” the director told Sputnik Iran.

Talking about the collection of artifacts, Nokandeh said, “There are pottery, porcelain, enamel, clay figurines, seals and very rare jewels and ornaments. Today, these items are housed in our National Museum of Iran. Next week, we plan to transfer the 30 artifacts to the Museum of Antiquities of Iran, where there will be an exhibition and visitors can see the entire collection of the artifacts.”

Joint effort for the return of artifacts

The director stressed that Italian law enforcement was a huge help as it actively engaged in facilitating the return of the Persian artifacts to Iran.

Talking about how the artifacts ended up in Italy in the first place, Nokandeh told Sputnik that an artifact dealer of Pakistani origin who was permanently living in Italy bought them from Thailand and tried to transport them to Italy.

“At the airport, in one of the Italian cities, he was detained on suspicion of smuggling. Then the artifacts ended up in the National Museum of Oriental Art in Rome,” the director explained.

© AP Photo / BEHROUZ MEHRI
Iran Sees Increased Tourist Flow Owing to Nuclear Deal Implementation
He further said that the court, after examining the items provided irrefutable evidence that these monuments belonged to Iranian cultural heritage and issued a decree for the return of the collection of artifacts to Iran.

It should be noted that the battle between the Iranian experts, historians and lawyers for the return of the stolen historical artifacts lasted for several years before ending in success. As a result, the court ruled for the transfer of antiquities to the Iranian side.

“The matter of the stolen collection was viewed under a legal perspective with assistance of the police. It was so, especially because Iran has very close ties with UNESCO member countries and Italy is one of the most active countries fighting for the preservation of antiquities and cultural heritage,” the director said.

Nokandeh, discussing the return of these artifacts, noted that such international cooperation was not limited to Italy. There was good collaboration with Belgium and other countries.

“During the presidency of Dr. Hassan Rouhani at least 4 collections of artifacts from different countries were returned to Iran. One of them was a stolen artifact, which was transferred to the head of the Institute of Oriental Studies of the University of Chicago to Iran.”

In Belgium, there was also a collection of ancient artifacts belonging to Persian cultural heritage. The process of the return of this collection was also accompanied by judicial and legal proceedings.

“It is important to note that Iran has very good cooperation with Interpol regarding discovery and return of stolen Iranian antiquities,” Nokandeh said.

Role of politics in preserving history

He further said that perhaps it would have taken Iran much longer to assert its rights in the court regarding the return of stolen ancient artifacts. However, international political factors played a huge role as the signing of the historic nuclear deal and the beginning of the implementation of the nuclear agreement resulted in lifting of sanctions, leading to increased interaction between Iran and foreign countries, including cooperation in tourism and cultural heritage matters.

Nokandeh further said that after the Iranian nuclear deal was reached, there was a significant increase in the number of tourists in Iran, who are attracted by Iran’s ancient historical and cultural monuments.

“Our cooperation with the various international organizations in the field of conservation and restoration of cultural monuments has also increased.”

Iran has thriving collaboration with large and famous museums of the world and has significantly improved ties, including an agreement on cooperation with research centers from different countries,” Nokandeh said.

Restoration of monuments in Iraq and Syria

The director further said that today, Iran's team of specialists has been actively working for restoration and preservation of cultural ancient religious monuments in Iraq, which have suffered at the hands of the terrorists.

The restoration of the monuments destroyed by terrorists in Syria has also begun.

“It is not only just the world’s big cultural monuments. All countries should help each other in order to preserve these priceless treasures. As I know, the Iranian cultural heritage organization has already started active work in Iraq,” Nokandeh concluded.

It is important to note, that in the framework of search and return of ancient historical artifacts the Iranian organization has called on all Iranian citizens living abroad to report any information regarding historical artifacts of Persian culture, stolen and illegally exported from the country.