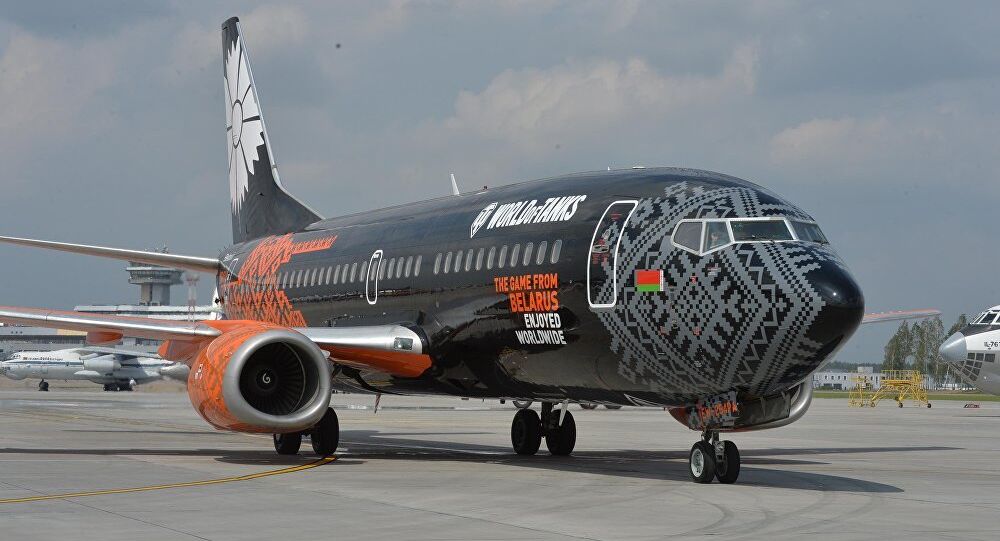 Branded World of Tanks Belavia Boeing Takes to the Skies

The company “Wargaming” has designed a branded Boeing 737-300 for Belavia, the state airline of Belarus; the vehicle is ready for its first flight.

Wargaming, a Belarus-Cypriot company which designed the game World of Tanks, has given one of Belavia Airlines' Boeings a makeover. The country's best-known brands have joined forces to promote the image of our country abroad.

Wargaming specialists designed the vividly painted exterior of the unique airplane, and a Czech team was responsible for the concept's realization. The Boeing 737-300 arrived in Minsk from the Czech city of Ostrava following the detailed paint job, and Sputnik Belarus was on location to witness its arrival.

Giving the plane its World of Tanks exterior took 300 gallons (1132 liters) of paint and 42 square meters of stencil. Thirteen specialists worked for 1,800 hours.

The plane is brightly painted in black and orange, with a tank on its side.

Just yesterday, specialist painters put the finishing touches on the sides and fuselage of the aircraft.

On July 29, National Airport in Minsk welcomed the first brand-sponsored aircraft in the history of Belavia – the World of Tanks Boeing.

The presentation started later than planned as the aircraft was delayed for 45 minutes. Nevertheless, representatives of the company noted that the day for the presentation was well-chosen, as the clear weather ensured that the plane will be visible through journalists’ video camera lenses.

“It is not an ordinary flight. In this case, a delay can be tolerated,” Belavia's Deputy Director Igor Cherginets told Sputnik Belarus.

All the company’s management, headed by director Anatoly Gusarov, and Minsk National Airport’s administration came out to meet the branded Boeing. After landing, the crew doused the aircraft with water from a fire-pump. By the time journalists saw the plane, it was already freshly washed.

Many flight crew members are eager to work on board the War of Tanks Boeing 737-300. Even given that in many respects, it doesn't differ from other more or less prestigious flights.

“My husband loves to play World of Tanks. I am not a big fan of this game but would not refuse an offer to ride the branded aircraft,” says stewardess Olesya.

On Saturday, the plane will fly to Moscow.

In addition, according to Anatoly Gusarov, in late August, the Boeing 737-300 departs for Vilnius to have its cabin re-kitted.

Future flights are expected to be comfortable and relaxed.