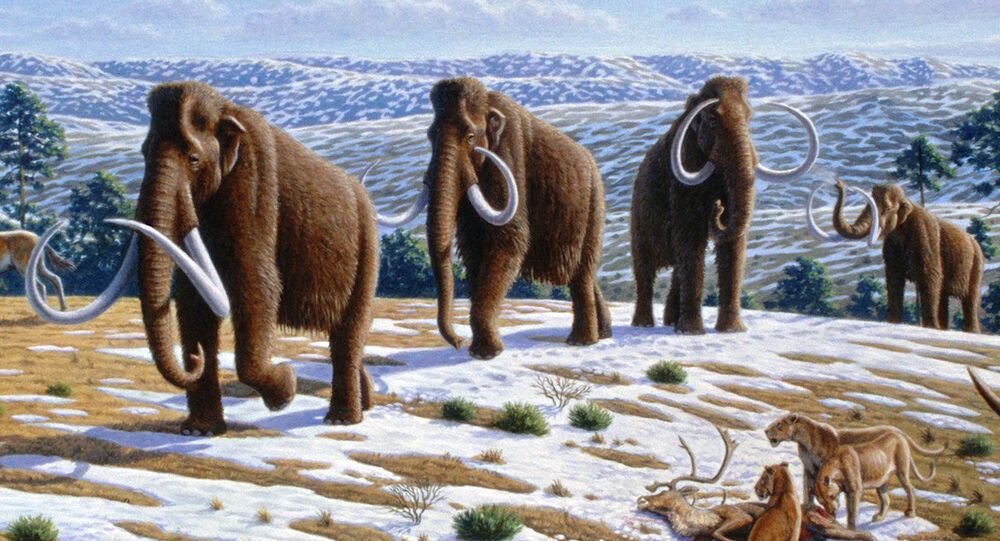 The creation of the World Mammoth Center in North-Eastern Federal University (NEFU) will help Korean scientists achieve the cloning of mammoths, according to theUniversity's press service.

“There are two options of the mammoth cloning. The first one is through the search for active cells. Second option is the artificial DNA synthesis,” explained head of the laboratory of the mammoth museum NEFU, Semyon Grigoriev.

© AFP 2021 / Arno Burgi
Giant Dino Footprint Found in Bolivia
Scientists are at the initial stage of mammoth recovery. All data is rigorously tested, after which results are published in science magazines. The second step and the future research already are planned by NEFU academics.

“We continue the search for new materials and samples. We need such cell that could share information. If we could find a sample that is not only well preserved but also in which biochemical processes can take place, we will be able to impregnate it with the help of the Asian elephant materials,” says professor of the South Korean Foundation of Biotechnological Research SOAAM, Hwang Woo-Suk.

Deputy Director for Service Zoological Institute RAS, Alexei Tikhonov, added that followers are important to science — those, who will precede the research in the future.

“Now our colleagues have a center with modern laboratories, where NEFU students will be educated. Probably this can become the most significant part of mammoth cloning – Yakut molecular biologists,” added Tikhonov.

© CC0
Researchers Spot a New Type of Black Hole in the Early Universe
Before it would be hard to believe in mammoth cloning, but now first steps are made and, scientists are optimistic in their forecasts.

The world Mammoth Center is an expansive project, which is supported at the government level. NEFU scientists began their research in 2012 together with of the South Korean Foundation of Biotechnological Research SOAAM “The revival of the mammoth and other fossil creatures”.