The Best of the Best: A Day With Russia’s Elite Soldiers

In the Presidential Regiment, which celebrated its 80th anniversary this year, officers and soldiers are called the “face of the country and the army,” since they are on duty at the Kremlin walls and ensure the safety of Russian state leaders.

Learn what it takes to be an elite soldier and guard of honor.

The best of the best

The Presidential Regiment Service Command of the Moscow Kremlin FSO includes three battalions, a cavalry honor guard and an operational reserve battalion. However, the most famous is considered to be the first guard of honor. Soldiers who serve in it stand on guard at the Tomb of the Unknown Soldier.

Many would like to be part of it, but only less than half of the candidates get the desired place.

“Are you sure you want to serve in the Presidential regiment?” is the first question commander Major Artem Kunakin poses to the soldier recruits. Service in it is quite difficult, so the requirements are very stringent: a soldier’s height must be no less than 175 centimeters, he must be inexcellent health and have impeccable physical training.

Soldiers that do not get into the first guard of honor are placed in other units of the regiment. In most cases they end up protecting the Kremlin’s territory.

“I immediately understand after speaking with someone whether or not they are a good fit. If the candidate cannot control certain gestures or has behavioral issues, then they will not pass. We specially design provocative questions to see the person’s reaction. For example, we ask about how they would react in certain situations, like if someone hits them while they are at their post or if the President comes in for a handshake,” says Artem Kunakin.

The regiment welcomes dynasties. Many soldiers come here after their fathers and granddads have served.

“We have a soldier who started with conscription then switched to contract service. Today his younger brother signed up to serve. In the case of twins we have an unspoken rule not to separate them, but sometimes it happens. A while ago, one soldier passed all physical and health examinations but the other one failed,” the major continued.

One day in the regiment

Soldiers’ barracks are situated in the historic Arsenal building. Separate divisions are scattered throughout the territory of the Moscow region. Their daily routine in similar to all of the other soldiers. They rise at 6 am, after which they form up and go for their morning work-out.

“We do exercises, running for about two kilometers. Soldiers are trained at the Kremlin premises in a place specially designated for this. After physical training we take a shower.  After examining their appearance, we head to the dining room, which is located in the Arsenal. Then soldiers attend class,” soldier Nicholas Tarov explained.

At 6 pm soldiers have free time, during which they read books or attend a buffet.

“Honestly, nearly all of our free time goes towards cleaning our uniforms,” one of the soldiers said.

The day ends with a formal promenade, walking in ranks, after which soldiers go to sleep at 10 pm.

Soldiers’ ordinary life is not limited to combat training and studying. Saturdays and Sundays are weekends, and soldiers can ask for a leave warrant.

“If parents come from far, the leave warrant can be asked during working days. This is an exception. For mothers and fathers we organize visiting days once a year where they can see the barracks and listen to the director’s speech, during which their sons usually receive awards for great service,” says Artem Kunakin.

The presidential regiment was the first, where mobile phones were allowed.

“A mobile phone should be of the simplest model, with no internet, photos or video functions,” said Kunakin.

Soldiers are allowed to smoke only in special designed places, but alcohol is forbidden.

They worship their uniforms

Not long ago a new dress uniform was designed for the soldiers, the hussar lightweight. It is intended for foot and cavalry guards, as well as for protocol and public events.

“A shako is attached to the uniform. Soldiers must polish and shine all of the metal objects on their uniform, so they can see their reflection in it. Also we have winter uniforms, which soldiers start to wear after October 15,” Corporal Yuri Volkov said.

An astrakhan collar and cap are added to the winter uniform. During strong frosts soldiers may stand in heated booths. 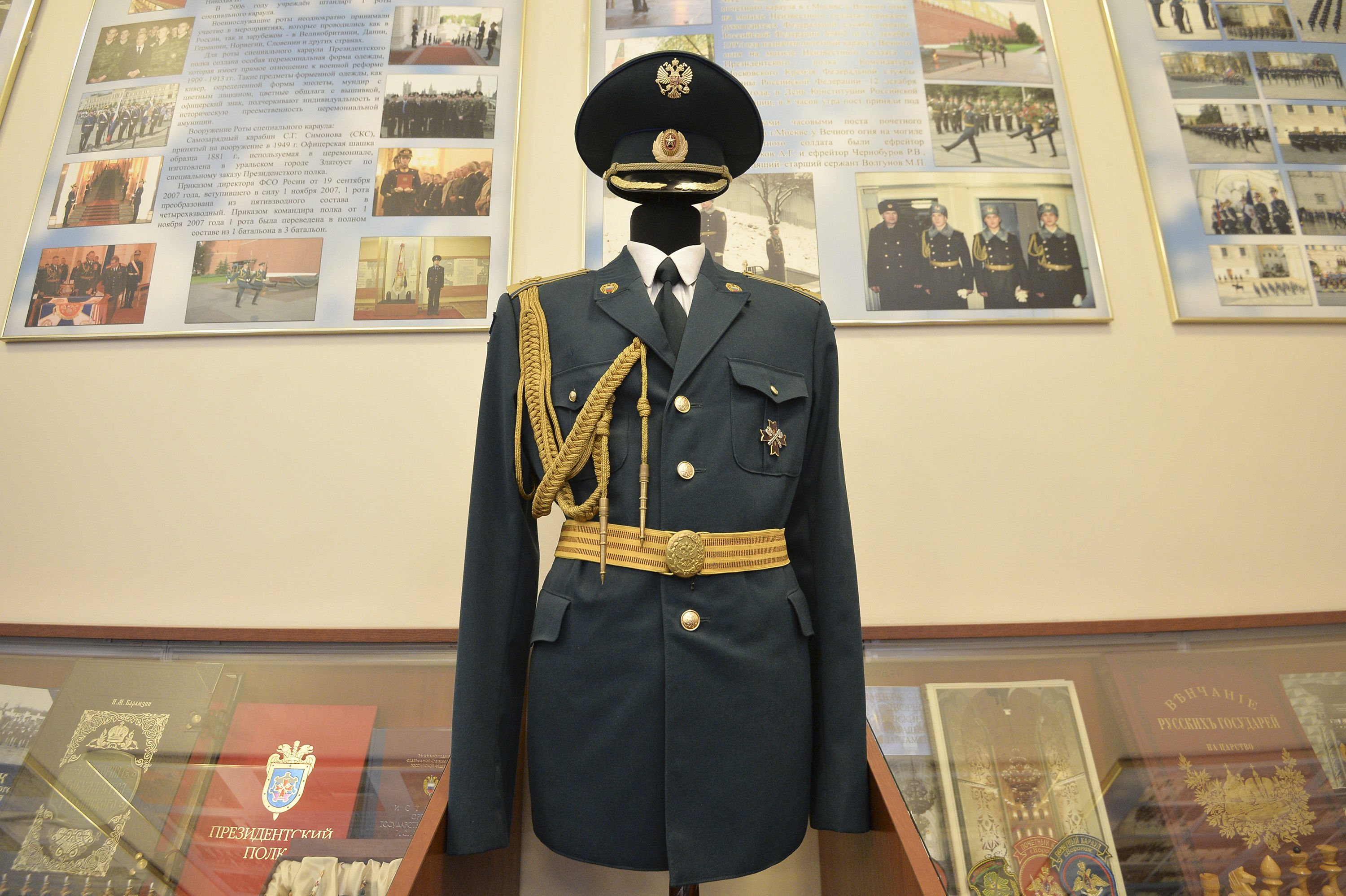 Now the Presidential regiment prepares for the military-musical festival “The Spasskaya Tower.” This performance is attended by many who come to see the soldiers perform complex acrobatic tricks with weapons or while riding a horse. 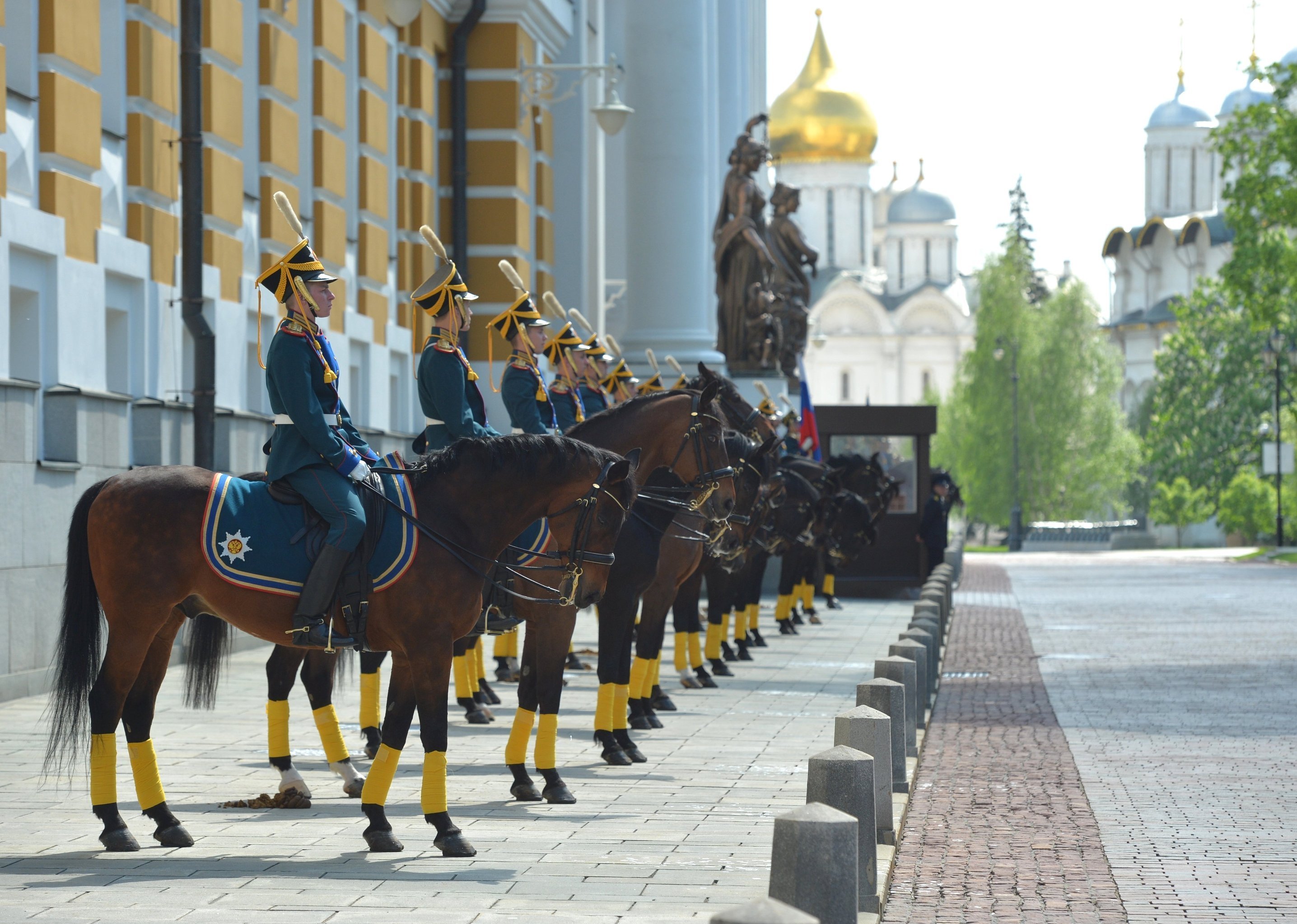 © Sputnik / Alexei Druzhinin
Mounted personnel of the Presidential Regiment at a presentation of a letter of commendation from the Supreme Commander-in-Chief of the Russian Armed Forces to the Kremlin Regiment of the Service of Moscow Kremlin’s Commandant.

“This festival is a huge responsibility. We have no room for error,” said Commander Artem Kunakin. “This year we are planning to add a small program, with a sword, arms and a flag. Plus the music will be changed.”

The Presidential regiment is the most elite in our country; they are representatives of the Russian army. The best of the best are here,” added Lance Sergeant Daniel Kalinin.

The Presidential regiment’s performance can be viewed at the festival “The Spasskaya Tower”, starting on August 27.

Turkish Soldiers Explain Why They Hijacked Helicopter and Fled to Greece