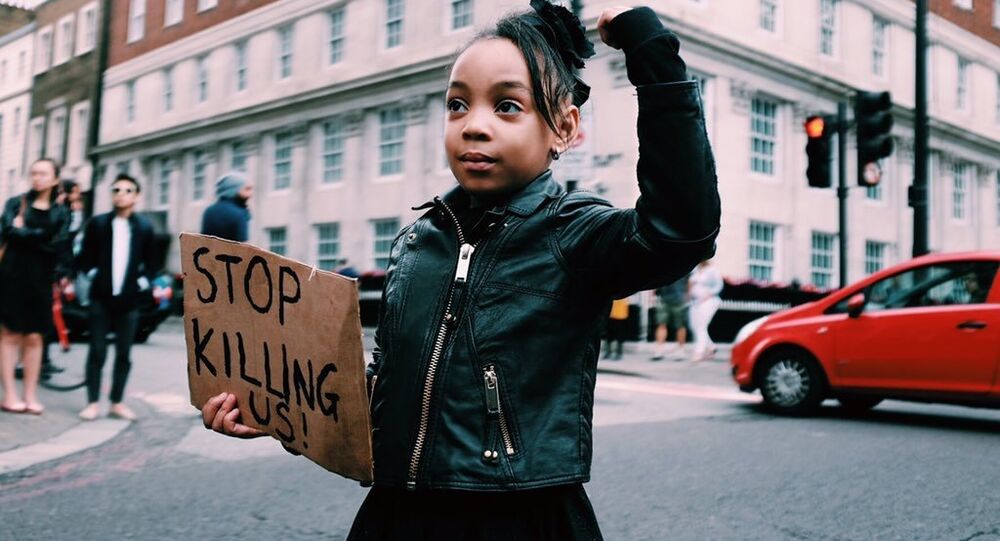 History is seldom made when people stand and do nothing; change rarely comes when people are silent. Londoners have been taking to the streets over the last few days to stand in solidarity with the US after days of violence.

The events in the US over the last two weeks have provoked an outcry across the world, not only because two black men where again shot by the police, but also for the violence that followed those tragic events and led to five police officers being fatality shot and several injured in Dallas on Friday, July 8.

All of this caused a ripple effect that traveled across the Atlantic; people were fed up, exasperated, frustrated, that the system was continually working against them, just because of their skin color. Protest began in the UK, Brixton was ground to a halt, and Oxford Circus became a no shopping zone.

​Protesters gathered in different places across the capital from Friday 8 until Sunday 10 July — people from all backgrounds, black, white, Asian and Muslim, male and female, and together as one they shared their horror, tears and concern over the events that had taken place in the US.

The UK has seen its fair share of problems when it comes to race, hundreds of black men and women have died in custody after being taken in by police. So for these protesters, America's problems was also there's.

Black Lives Matter (BLM) campaigner and organizer, MaryAm Ali, was in attendance at the marches in London. MaryAm believes that now is the time to express not only the sorrow at what is happening to black people in the US, but also make a stand and let people know this is not the end.

"I believe by the UK showing that they've taken action this week, people will be able to grasp the severity of the situation. By expressing worldwide rage with the lives lost, it will hopefully show that we, as the people, have had more than enough. We are not asking for change but instead, demanding it and the recent protests around the country this past week reflects that," MaryAm told Sputnik.

"We are becoming voices for those who can't be heard and we are fighting for justice for those still grieving. People in the UK too have black family members, friends and people they love living in America and being scared that may not be able to wake up and call them the next morning is terrifying. Hopefully, this shows how much importance this movement has."

​MaryAnn recognizes the importance of social media and how it has played a critical role in the movement. It has told the story of the unseen. For years, shootings have been taking place; however mobile technology and 4G capabilities now make it easier to capture the moment and share it online instantly.

In the case of Philando Castile, his girlfriend was able to film and live-stream the actual shooting and the moment her partner died — via Facebook. Not the prettiest or most comfortable thing to see, but in a world where these things have previously gone unseen for so long, citizen journalism is gaining momentum.

"Sometimes, media is very biased and only shows one side of the story, so social media is very important and allows others to look for all sides of a story.

"I believe that the institutionalized racism in law enforcement systems may hinder any progress that may bring change. Racism is still very much present and with every step we take towards change, there will always be people who want to keep us oppressed and voiceless but it's time we stopped that. The only thing to do is keep persistent until our voices are taken seriously," Ms Ali told Sputnik.

However, since the protest in the UK, several BLM protestors were arrested in the US on Sunday June 10. These included the lead activist for the group, Deray McKesson. It also sparked global outrage at an iconic photo of a young nurse standing still while she was being arrested by three riot police officers. This led to some anti-Black Lives Matter campaigners speaking out and saying that in fact, all lives matter, and that they believe the "black agenda" is being pushed, when really, everyone's life is of importance.

The woman in this iconic @Reuters photo, Ieshia Evans, got a nursing diploma from Scranton CTC. #BlackLivesMatter pic.twitter.com/PaxDh8pJFD

​"The All Lives Matter hashtag was created in response to the Black Lives Matter, so it was taken negatively because it was initially used as a tool to silence the black lives being lost. Although some people may see this hashtag as something that is undeniably stating the truth, it cannot be ignored that most ignorant people will use it as a chance to take away the voice of those fighting for their black sisters' and brothers' lives.

"The Black Lives Matter tag does not at all suggest that all lives do not matter — that's not at all what it means. It's a reminder, since so many seem to forget, that countless murders keep happening. All lives will matter once black lives start mattering. The ALM tag overshadows the BLM movement and we want change for us first and we will work towards that," Ms Ali told Sputnik.

However, for the BLM movement it's not just about the US and the UK, lives of others also suffering from inequality are of importance and change must take place to provide equality for all.

Petition to Classify #Black Lives Matter as Terrorists Gets Over 100,000