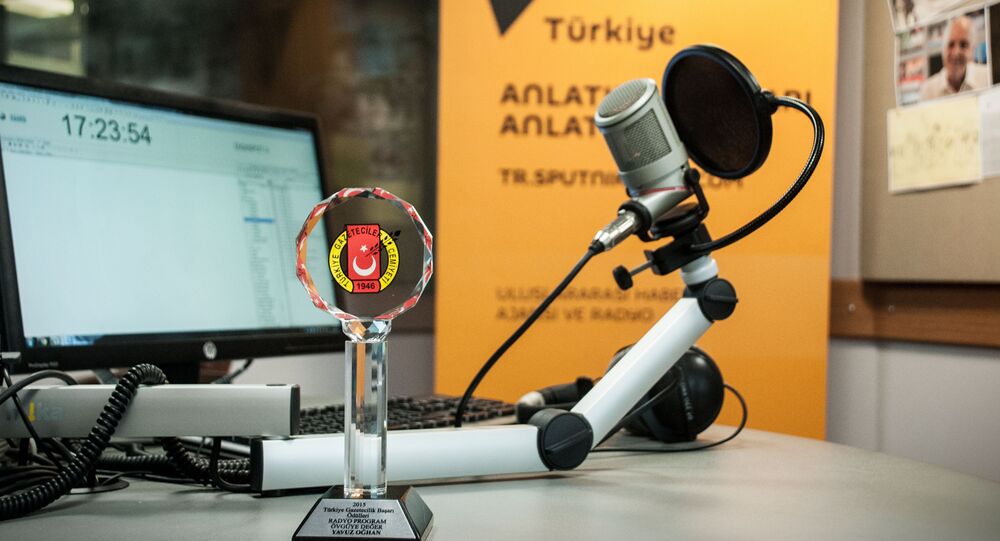 The Turkish Journalists' Association awarded the Sputnik news agency's evening radio program Listen to This (Bide Bunu Dinle in Turkish) on Tuesday for achievements in the field of journalism.

MOSCOW (Sputnik) — Author and host of the program, prominent journalist Yavuz Oghan was awarded in the broadcasting category.

The evening program "Listen to this, too" (Bide Bunu Dinle) is devoted to Turkey's political, economic and public issues and invites famous Turkish politicians, journalists, experts and analysts to come on air. 1.5 hours long, the program is broadcast on weekdays at 17:00 (Turkish time) by the RS FM radio station, and is available on the website tr.sputniknews.com.

The award ceremony was attended by over 500 journalists. Altogether 41 journalists received awards, with Sputnik's Yavuz Oghan receiving the award from the Chairman of the Turkish Journalists' Association Uğur Güç. In receipt of his award, Yavuz Oğhan commented: "Recognition is a wonderful side of any profession. I'm grateful to you for awarding me for my work. I've been on the radio for a very short time. We are going through tough times now. I've always believed that people who'd like to express their views and share their opinions will have a chance to be heard."

© Sputnik /
Sputnik Launches Political Talk Show in Argentina
Oğhan was born in Ankara in 1969. He started his career at the ATV television channel as a correspondent and worked in that capacity for five years before being appointed to the position of News Department Director. He therefore worked as the department's managing director and a representative of the CNN TÜRK channel in Ankara. In 2009 he moved from Ankara to Istanbul where he was appointed as CNN TÜRK News Coordinator. In addition, he has held top positions in newspapers "Posta" and "Radikal", and was Editor-in-Chief of the Artı 1 Kanal television channel. Now Oghan works in new media and is carrying out Sputnik's successful radio project, "Listen to this, too," on the RS FM radio station.