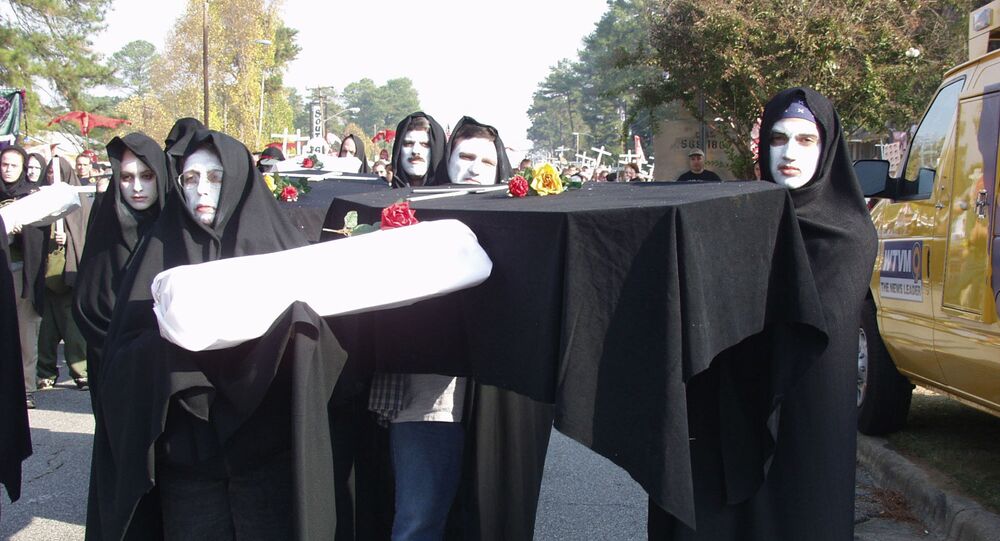 Mass Demonstrations Demand Closure of US’ Notorious ‘School of Assassins’

Georgia’s infamous ‘School of Assassins’ was besieged by hundreds of activists from across the country, calling for the closure of the military training center and a halt to the militarization of Latin America by the US.

The 25th anniversary protest march was held over the weekend in the town of Lumpkin in northern Georgia, and at the gates of Fort Benning army base, where the former US Army School of the Americas (SOA), hidden now under the name of the Western Hemisphere Institute for Security Cooperation (WHINSEC), is located, along with the nearby Stewart Immigrant Detention Center, the country’s largest for-profit immigration prison.

Dozens of nonprofit organizations and some 1,400 activists joined the rally, which aimed to protest against the notorious “School of Assassins,” as SOA is referred to, for its production of “death squads” that commit mass murders, torture and other human rights’ violations and military crimes across the globe, activists claim. Watchdogs maintain several Latin Americans dictators and many more security officials, who have perpetrated such crimes, graduated from SOA.

“Despite a shocking human rights abuse record, the School of the Americas continues to operate with US taxpayer money. Closing the SOA would send a strong human rights message to Latin America and the world,” SOA Watch founder and organizer of the event, Father Roy Bourgeois, said in a statement.

Hundreds held vigil in front of Fort Benning, while others marched to protest to the immigrant prison, where some 1,800 migrants await repatriation. Eleven people were arrested after crossing onto the grounds of the prison, according to the Ledger-Enquirer.

The event was attended, among others, by members of Veterans for Peace.

“From Ferguson to Ayotzinapa, we must continue to denounce the militarization of police across the Americas and call for an end of state-sponsored terrorism and violence against our communities. Our clamor for justice must be heard!” the pacifist NGO’s online statement reads.

Newly released documents, obtained by the Partnership for Civil Justice Fund, suggest the FBI has been monitoring the activities of SOA Watch and infiltrating the NGO, using confidential informants and counterterrorism units.