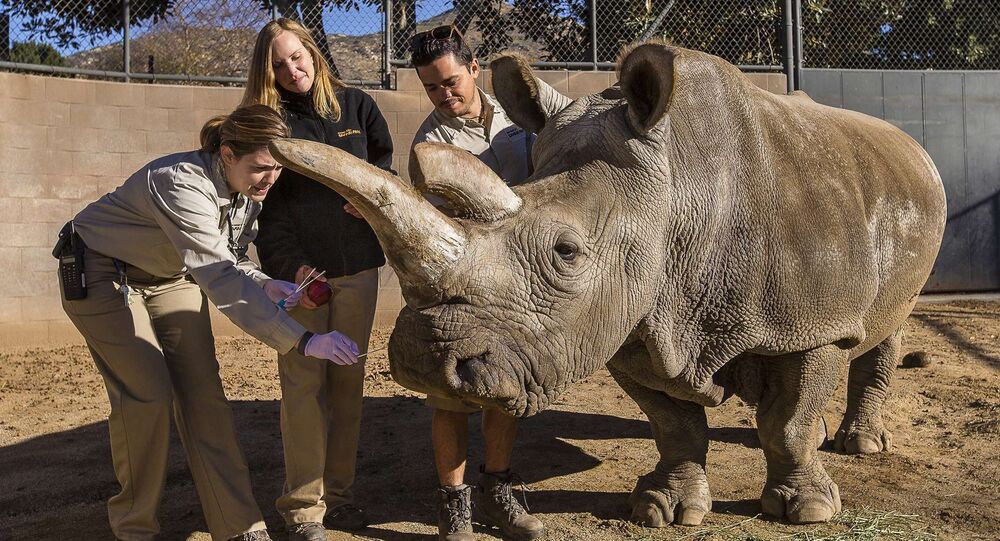 Environmentalists have sounded the extinction alarm as a rare white rhino died Sunday at the San Diego Zoo's Safari Park; only three of the animals remain.

Youtube / San Diego Zoo
Hippo in a Haystack: Pygmy Hippopotamus Born in San Diego Zoo
The 41-year-old female northern white rhino female, Nola, had lived in the zoo for the past 26 years. She was euthanized after she was unable to recover from interminable pain, according to zoo officials. Nola suffered most of all from arthritis and a chronic bacterial infection which resulted in a reoccurring abscess on her right hip.

Nola weighed in at a whopping 4,500 pounds (2042 kg); white rhinos are the heaviest rhinos, weighing more than all other land mammals except elephants.

The zoo's veterinarians attempted to operate on Nola on November 13, but to no avail: a few days after the surgery, her health worsened. She lost her appetite and became listless, and the vets decided to put her out of her misery on Sunday.

“Nola was an iconic animal, not only at the San Diego Zoo Safari Park, but worldwide,” a park statement read.

The Safari Park has developed a genetic cryostorage project, the "Frozen Zoo", in collaboration with the Scripps Research Institute in La Jolla, California to help save endangered species. The zoo hopes to use the viable stem cells it has taken from twelve white rhinos since 1979 to restore genetic variation. The zoo workers hope to develop embryos to implant in the six new rhinos, so they may one day serve as surrogate mothers for a resurrected generation of northern white rhinos, born in captivity.
San Diego scientists estimate that this may take about 15 years.

While poachers sought ivory in the 19th century for the production of artwork, pianos and billiard balls, 21st century demand for rhino horn originates in Vietnam. Rhino horn is prized among wealthier Vietnamese, as according to traditional medical beliefs it is capable of treating cancer and other diseases. According to The Atlantic, "the country's appetite for rhino horn is so great that it now fetches up to $100,000/kg, making it worth more than its weight in gold."

Another northern white rhino, Angalifu from Sudan, died at the San Diego Zoo of old age several days short of his 44 birthday in December, 2014.
Previously, researchers had hoped to save the endangered northern white rhinos by artificially inseminating females.