The protraction of the investigation into the case of WikiLeaks founder Julian Assange's alleged sexual crimes by the Swedish authorities runs counter to the principles of a just society, a WikiLeaks spokesman told Sputnik Thursday.

MOSCOW (Sputnik), Daria Chernyshova — Some of the potential charges against Assange are due to expire under the statute of limitations in August.

"There has been nothing normal about how the Swedish prosecution authorities have been handling the case. This is obviously a politicized process, totally abnormal and totally abandoning the core principles of a just society where speedy processes should be encouraged and enforced for all parties involved. That has not been the case," WikiLeaks spokesperson Kristinn Hrafnsson said.

© AFP 2019 / Justin Tallis
Sweden Red-Faced as Assange Unlikely to Be Charged Over Sex Assault Claims
Hrafnsson stressed that the Swedish prosecutor Marianne Ny had failed to move the case forward by interviewing Mr. Assange. For four-and-a-half years the prosecutor has refused to interview Assange in London by telephone, videolink or in person by traveling to London.

In May, Assange’s lawyer Thomas Olsson told Sputnik that Swedish prosecutors were preparing to interview Assange in London after his appeal against the detention order was rejected by Sweden's Supreme Court. The interview was canceled by the Swedish prosecutor Marianne Ny in mid-June.

"Only very recently, the Swedish authorities took the necessary step of applying to the Ecuadorian authorities for formal legal assistance, so that the interview by prosecutor can take place on de-facto Ecuadorian soil, in the Ecuadorian Embassy in London," Hrafnsson said.

He stressed that the "political association" with the case has been a major obstacle to the entire investigation process. 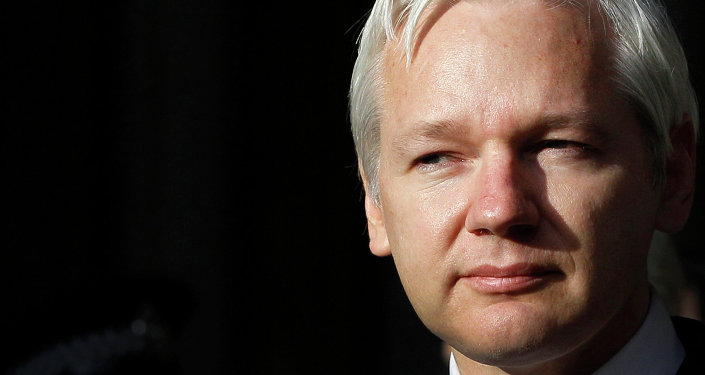 © AP Photo / Kirsty Wigglesworth
France Gripped in 'Panic' as Assange Proposes Asylum
Hrafnsson said "nothing from Julian Assange's side has been stalling the case," while the Swedish authorities have consistently been unwilling to move the case forward.

In 2006, Assange launched the WikiLeaks website, through which he has released thousands of classified documents from around the world.

In 2010, Swedish authorities accused, but did not charge Assange of unlawful coercion and rape. Since 2012, the whistleblower has been residing at the Ecuadorian embassy in London, fearing extradition by Swedish authorities to the United States where he could face espionage charges for publishing classified documents.