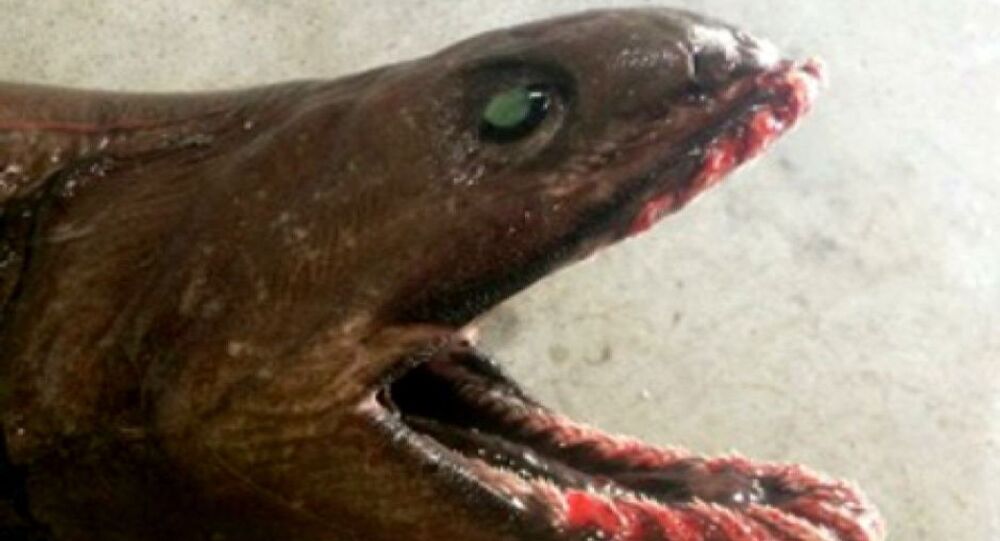 A rarely seen, terrifying frilled shark has been caught in the waters off south-eastern Victoria.

MOSCOW, January 21 (Sputnik) — A rarely seen, terrifying frilled shark has been caught in the waters off south-eastern Victoria.

The species is believed to have existed for at least 80 million years and is known as a 'living fossil', reports ABC.

© REUTERS / Todd Marshall/Handout via Reuters
Ancient Dolphin-Like Sea Monster Found in Scotland
It was caught by fishermen off south-eastern Victoria. A trawler working in the waters near Lakes Entrance in Victoria’s Gippsland region pulled the shark from 700m depth, even though it normally lives at a depth of about 1500m.

Simon Boag, from the South East Trawl Fishing Association, said it was the first time in living memory that a frilled shark had been sighted.

"We couldn't find a fisherman who had ever seen one before," he said.

"It does look 80 million years old. It looks prehistoric; it looks like it's from another time!"

The shark has over 300 needle-like teeth in 25 rows, with a head and fins similar to an eel along with a long shark-like tail.

The terrifying-looking creature has been responsible for some ancient sea monster myths. It is well known to the scientific community but rarely seen.

Environmental Issues Still on the Agenda in 2014