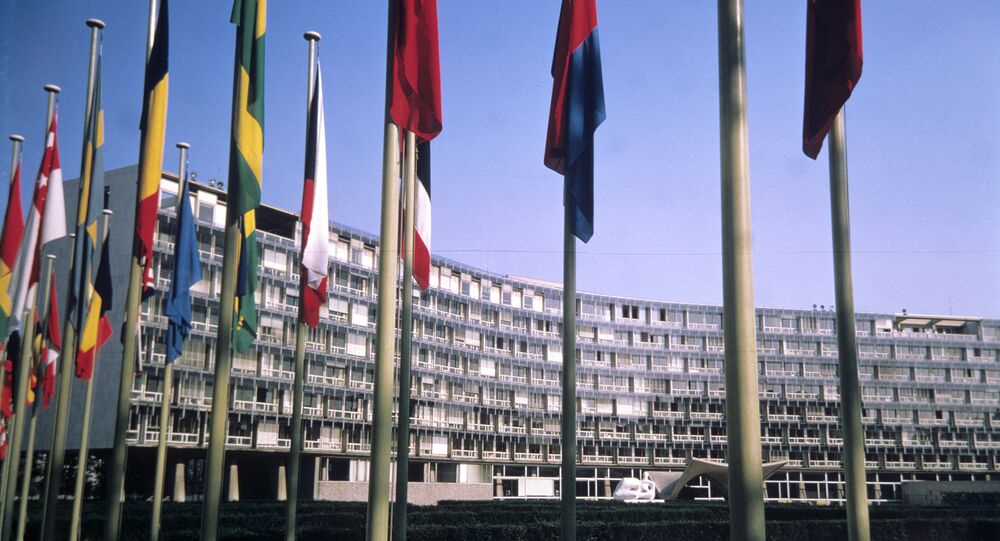 The exhibition titled “Hijacked childhood. Victims of Holocaust as seen by the child prisoners of Nazi concentration camp Salaspils (Latvia)” was scheduled to open at the UNESCO headquarters in Paris in late January.

© Flickr / Steve Rhodes
Ads Equating Islam With Nazism Appear On Public Buses in San Francisco
MOSCOW, January 20 (Sputnik) – The Permanent Delegation of the Republic of Latvia to UNESCO has cancelled an exhibition about the Nazi concentration camp at Salaspils organized by Latvia, Russia and Belarus, fearing that it will harm Latvia’s image in the EU, one of the exhibition’s organizers told RIA Novosti Tuesday.

The exhibition titled “Hijacked childhood. Victims of Holocaust as seen by the child prisoners of Nazi concentration camp Salaspils (Latvia)” was scheduled to open at the UNESCO headquarters in Paris in late January. According to the RIA Novosti source at UNESCO, the exhibition was to consist of 12 stands with photographs and historic materials and a screen, broadcasting records of child prisoners.

“The fact that the Permanent Delegation of the Republic of Latvia to UNESCO has blocked this exhibition– and in my point of view, citing a truly weird motive — was an unpleasant surprise for us. The motive was as follows: this exhibition is allegedly able to harm Latvia’s image during its EU presidency,” said Alexander Dyukov, the head of the Moscow-based Historical Memory Foundation.

© Flickr / Narodna Partija
Europe Must Prevent Spread of Neo-Nazism: Senior Serbian Lawmaker
Dyukov added that he did not understand how recounting the crimes of the Nazis and their allies could harm the image of modern-day Latvia. He said that it would only be possible if Latvia treated the Nazi’s crimes as its own. “The sad fact is that it seems to be that way,” Dyukov said.

The Russian historian added that the decision to cancel the exhibition came as a shock to its organizers. “We had been preparing this exhibition since last year,” Dyukov said, adding that the exhibition was designed to be a part of an international project by historians from Russia, Belarus and Latvia aimed at proving that “no crimes are ever committed against just one nation.”

Dyukov noted that at the beginning the Salaspils concentration camp had been used to imprison Jewish people and later — to imprison and liquidate people of other nationalities, those who had fallen victim to Nazi punitive operations on the Latvia-Belarus border.

Earlier on Tuesday, a source at UNESCO told RIA Novosti that the talks regarding the Holocaust exposition had been held with the participation of Russia, Belarus and Latvia.

© Sputnik / RIA Novosti
US Vote Against Russia's Anti-Nazi UN Resolution Politically Motivated: Foreign Ministry
According to the source, the Latvian delegation insisted that the event should be cancelled after learning that a Russian citizen declared “persona non grata” in Latvia was one of the members of the exposition’s scientific board.

Riga did not change its decision despite the fact that UNESCO had already approved holding the event and calls by Russia and Belarus not to cancel a project of such a great social importance.

Salaspils concentration camp was established in 1941, some 11 miles southeast of the Latvian capital Riga. According to the protocols from the Nuremberg trials, more than 100,000 people died at the camp.