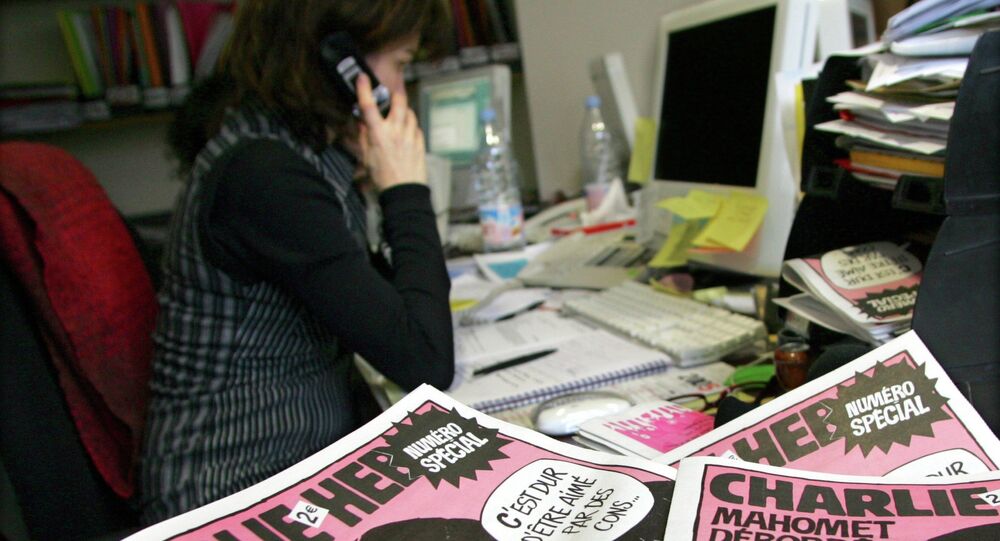 The magazine's editorial office in Paris was attacked by unidentified gunmen earlier on Wednesday. The attack killed at least 12 people, most of them journalists. In a video of the shooting uploaded to the Internet the attackers can be heard shouting "Allahu Akbar" while shooting. The killers remain at large.

The magazine was founded in 1969 and ran until 1981. In 1992 the magazine was resurrected and has continued to present day. It's current print circulation is approximately 45,000 per issue.

© AFP 2020 / BRENDAN SMIALOWSKI
Updates on Charlie Hebdo Attack: Manhunt Underway, France Mourns Victims
Charlie Hebdo has been involved in multiple law suits, some filed by the Catholic Church. The magazine often targets politicians and popular figures with their caricatures and has been banned several times in France.

The magazine often included caricatures depicting religious leaders, among them the Prophet Muhammad. Cartoons lampooning the founder of Islam caused controversy among many Muslims.

In 2006, Charlie Hebdo republished cartoons depicting the Prophet Muhammad that were originally published by Danish newspaper Jyllands-Posten, causing a storm of anger among Islamic fundamentalists. Later that year the magazine was sued by several prominent religious organizations.

© REUTERS / Remy de la Mauviniere/Pool
Hollande: Shooting in Charlie Hebdo Office in Paris ‘Terrorist Attack’
In the 2007 trial, then editor Philippe Val and the magazine were not found guilty.

In November 2011, unidentified individuals set the magazine's office on fire. The arson was stated to be a response to the magazine's facetious declaration that the current issue was edited by the Prophet Muhammad himself. In the issue the magazine changed its name to be Charia Hebdo, in a satirical nod to sharia law.

In 2012, the magazine published another series of caricatures in response to the release of a controversial film called The Innocence of Muslims. The cover of the September 2012 issue of Charlie Hebdo depicted a Muslim in a wheelchair pushed by a Jew. The image was titled "Intouchables 2," a reference to the popular 2011 French film "Intouchables," about a paralyzed rich white man and his black caregiver.

On January 7, 2015, unidentified masked men entered the editorial office of the magazine in central Paris and opened fire with automatic weapons, killing 12 people. The magazine's editor Stephane Charbonnier was killed in the attack.

Charlie Hebdo posted a tweet shortly before the attack with a cartoon of the leader of the Islamic State terrorist group Abu Bakr al-Baghdadi.