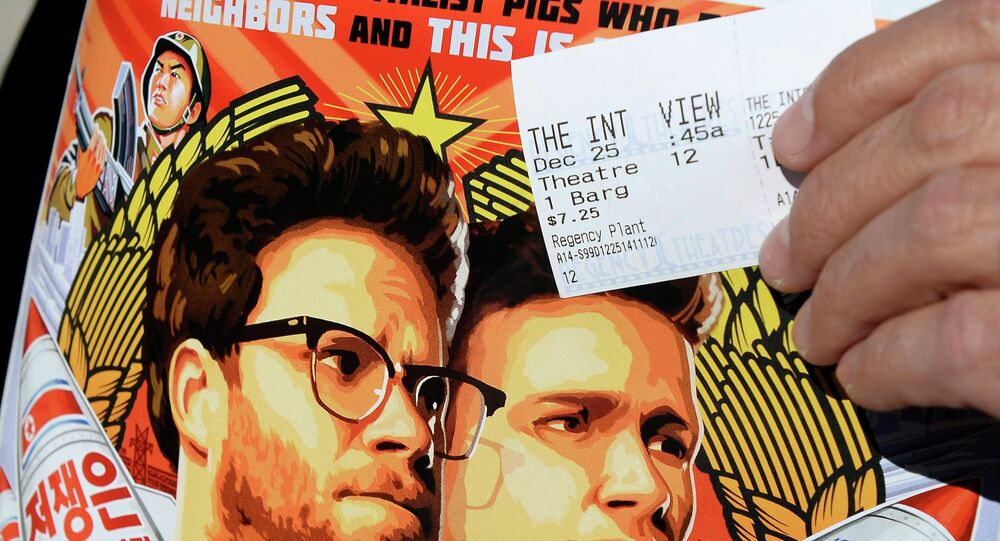 After all the wait and controversy, the film has become available for viewers and reactions have ranged from praise to criticism and everything in between.

MOSCOW, December 26 (Sputnik) –The provocative comedy, "The Interview," was viewed by fans around the world and it received mix reviews ranging from praise to criticism. The reaction was seen from media magazines, websites and social media sites, especially from Twitter, where people shared their commentary about the film.

© AP Photo / hn Young-joon
One Month Anniversary of Sony-N Korea Hacking Scandal: How It All Unfolded
The controversy surrounding "The Interview” made headlines back on November 24, when a group of alleged North Korean hackers, calling themselves "Guardians of Peace”, carried out a cyber-attack on Sony Pictures Entertainment.

After all the wait and controversy, the film became has become available for the viewers and the reactions have ranged from praise to mockery and everything in between.

According to The Mashable, "The Interview" ended up being more of a social commentary on Katy Perry, puppies and The Lord of the Rings than on North Korean leadership, but it did manage to raise a few eyebrows.

© AP Photo / Keystone, Walter Bier, file
Google Steps in to Stream Controversial Film 'The Interview'
Internet commentators were ragging over the comedy, with some absolutely loving the absurd frolics of James Franco and Seth Rogen, while others calling it “far less compelling than the events it inspired.

The Rolling Stone said the films mission “is merely to make audiences p**s themselves laughing. At that it succeeds.”

Iran’s Press TV, however, took a far more serious tone, saying "The Interview" isn’t a movie at all; it's a “propaganda tool.”

Social media responses varied in a number of ways ranging from critical, funny and even patriotic.

Tiffany Hines in her tweet expressed praise to actors' Seth Rogen and James Franco saying that the opening scene was pricess.

Glenn Kenny said he wanted to show the movie to people in his gym by displaying it on a plasma.

Gonna see if I can conjure up "The Interview" on my gym's plasma displays, be a big free speech hero

Danny Sullivan said that even Santa will arrive late this year as he might be watching the film.

Kids, Santa will be delayed for two hours this year. He heard about all The Interview stuff & pulled over to watch the movie.

Another Twitter user thanked the North Korean leader for giving her soemthing to watch on Christmas day.

Thanks to Kim Jong Un, we can all watch #TheInterview in our PJs on Xmas day! You da man Un!

Well, that was one of the most brilliantly orchestrated marketing campaigns in history #TheInterview

Liberal Paul wrote on his Twitter that to make sure that Americans watch something it should be banned.

Apparently, the best way to get Americans to watch something is to tell them they cannot watch it. #TheInterview