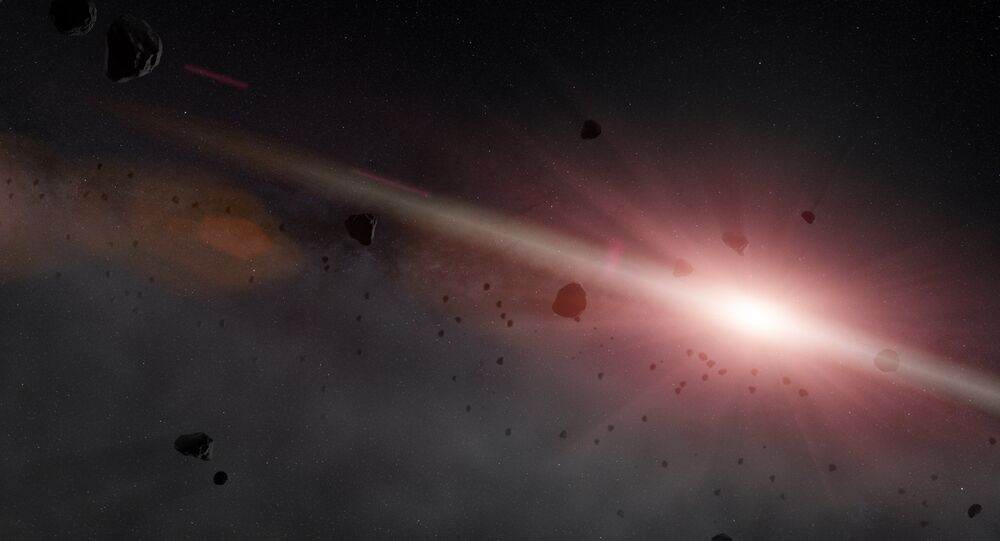 Although the asteroid, named '2014 UR116', poses no immediate threat to Earth, scientists highlight the damage an asteroid could cause - in this case an explosion 1,000 times more powerful than that of the one caused by a meteor crash in Russia in 2013.

© Wikipedia / Go Miyazaki
Japan Launches Asteroid-Chasing Spacecraft
MOSCOW, December 11 (Sputnik) – Vladimir Lipunov, a professor at Moscow State University, who discovered the asteroid that is heading towards Earth, said the space rock, named '2014 UR116', poses no immediate threat although it could 'theoretically' hit Earth, reports The Telegraph.

He said that if the asteroid were to hit Earth it would cause an explosion 1,000 times greater than the 2013 impact of a bus-sized meteor in Russia. That cosmic rock had entered Earth’s atmosphere over the city of Chelyabinsk, causing a series of violent blasts that blew out windows and damaged buildings for miles around.

As reported by Daily Mail, more than 1,600 people were injured by the shock-wave caused by the explosion of the Chelyabinsk meteorite; it was estimated to have been as strong as 20 Hiroshima atomic bombs.

Prof Lipunov said it is difficult to calculate the orbit of big rocks like '2014 UR116' because their trajectories are constantly being changed by the gravitational pull of other planets, reports The Telegraph.

The scientist warned that asteroids could cause harm to the planet and it is important to know more about them: "We need to permanently track this asteroid, because even a small mistake in calculations could have serious consequences," he said.

However, calculations from NASA and the Minor Planet Center in Cambridge, Massachusetts, show that the asteroid does not pose a danger to Earth for at least the next 150 years, reports Space.com.

“Riding” the Comet: Scientists Study Signals Transmitted by Philae Space Probe
"Some recent press reports have suggested that an asteroid designated 2014 UR116, found on Oct. 27, 2014 at the MASTER-II observatory in Kislovodsk, Russia, represents an impact threat to the Earth," officials at NASA's Jet Propulsion Laboratory in California said in a statement. "While this approximately 400-meter sized asteroid has a three-year orbital period around the sun and returns to the Earth's neighborhood periodically, it does not represent a threat, because it’s orbital path does not pass sufficiently close to the Earth's orbit."

Lord Martin Rees, the Astronomer Royal, Brian Cox, and Richard Dawkins are among more than 100 experts who came together to warn that asteroids could wipe out humanity, calling for the creation of a huge asteroid detection system to be able to track and destroy them on time.

“The ancients were correct in their belief that the heavens and the motion of astronomical bodies affect life on Earth — just not in the way they imagined," said Lord Rees.

“Sometimes those heavenly bodies run into Earth. This is why we must make it our mission to find asteroids before they find us.”