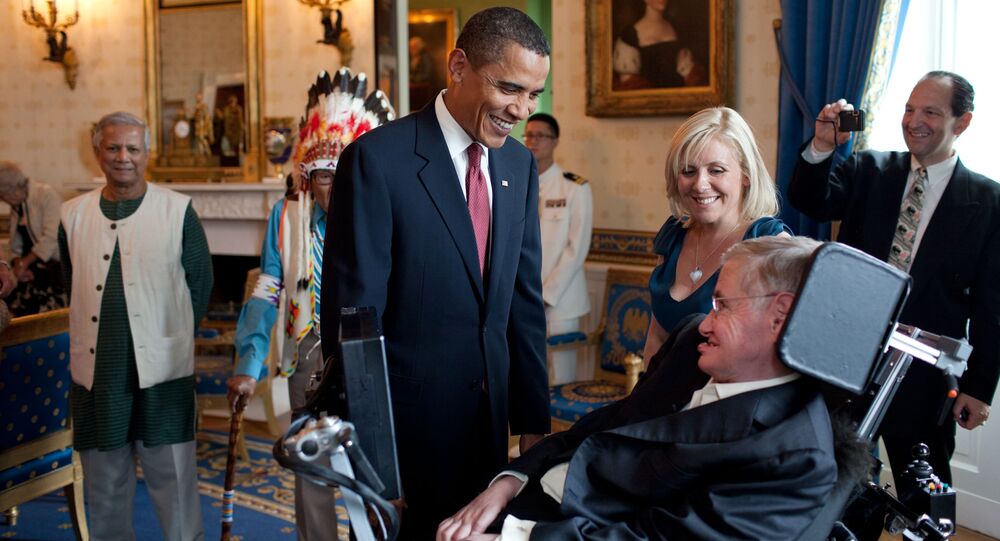 Professor Stephen Hawking, a renown physicist, has expressed desire to play a Bond villain in the next James Bond film.

MOSCOW, December 1 (Sputnik) – The world-renowned physicist has expressed interest in being a part of a new James Bond film. He said his computerized voice, which he operates with a twitch of his cheek and gives him a distinctive tone, would be perfect for a 007 film, reports The Telegraph.

“My idea role would be a baddie in a James Bond film. I think the wheelchair and the computer voice would fit the part,” he said.

In an interview with Wired magazine, Prof Hawking who is now 72, said he loves to communicate with the world.

“I was able to speak with a speech synthesizer, though it gave me an American accent. I have kept that voice, because it’s now my trademark,” he said.

“Before I lost my voice, it was slurred, so only those close to me could understand, but with the computer voice, I found I could give popular lectures. I enjoy communicating science. It is important that the public understands basic science, if they are not to leave vital decisions to others.”

Professor Hawking’s acting career has seen a few advents before. He played in The Simpsons episode, made an appearance as himself in an episode of Star Trek, playing poker with Data, Isaac Newton and Albert Einstein, he also signed up to appear in the recent Monty Python reunion shows.

The Theory of Everything is a film released on 7th November based on Hawking’s life. It has an estimated domestic total of $9,604,000 already. The movie shows the onset of Hawking’s motor neuron disease, diagnosed at 21 while he was an undergraduate at Cambridge. In the movie the lead role is played by Eddie Redmayne, who portrays Stephen Hawking.