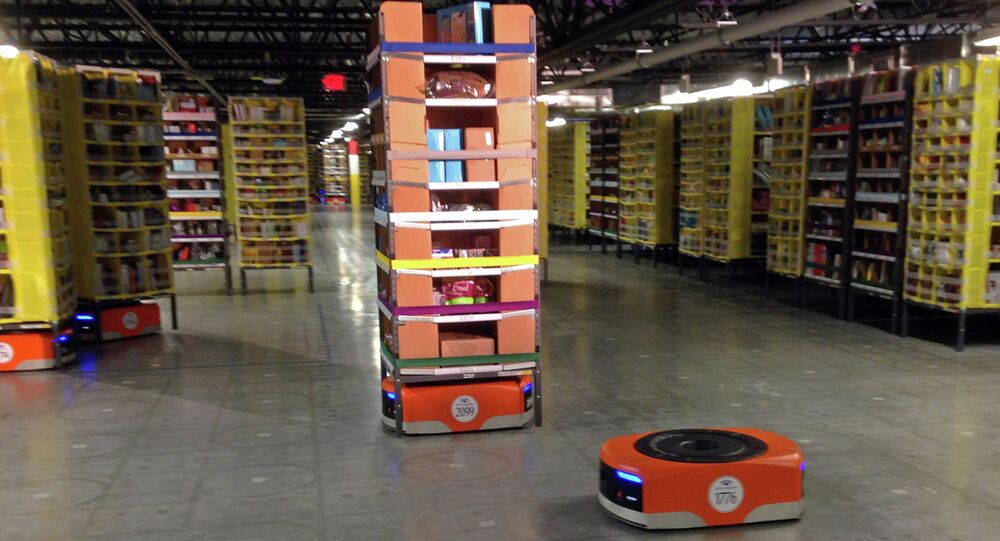 Kiva Robots were introduced by Amazon to assist and speed up the biggest online shopping day of the year, Cyber Monday.

© Sputnik /
Amazon to Buy Twitch for $1 Bln
MOSCOW, December 1 (Sputnik) — Amazon.com has introduced more than 15,000 robots across 10 US warehouses to cut operating costs by one-fifth and speed the time it takes to deliver items to customers on the eve of Cyber Monday, reports LA Times.

The orange robots weigh 145 kg; they zoom around the warehouse lifting shelves of Amazon products containing video games, coloring books and stuffed animals. They speedily deliver the items to employee stations, reducing the time it takes for workers to find items and put them into boxes for shipment.

On the eve of Cyber Monday, Amazon's year-old warehouse in Tracy, California was bustling with mechanical activity as the retailer organized for one of the biggest shopping days of the year. The Kiva robots have allowed Amazon to hold about 50 percent more items and cut the time it takes to offer same-day delivery in several areas, said Dave Clark, senior vice president of worldwide operations and customer services, reports Reuters.

Amazon has been quickly adopting the technology, developed by Kiva Systems, a robotics company it bought for $775 million in 2012. "It's certainly proving out that it's justified itself," Clark said of the Kiva acquisition. "We're happy with the economics of it."

Is There Still a Place for Dictionaries in the Age of Technology?