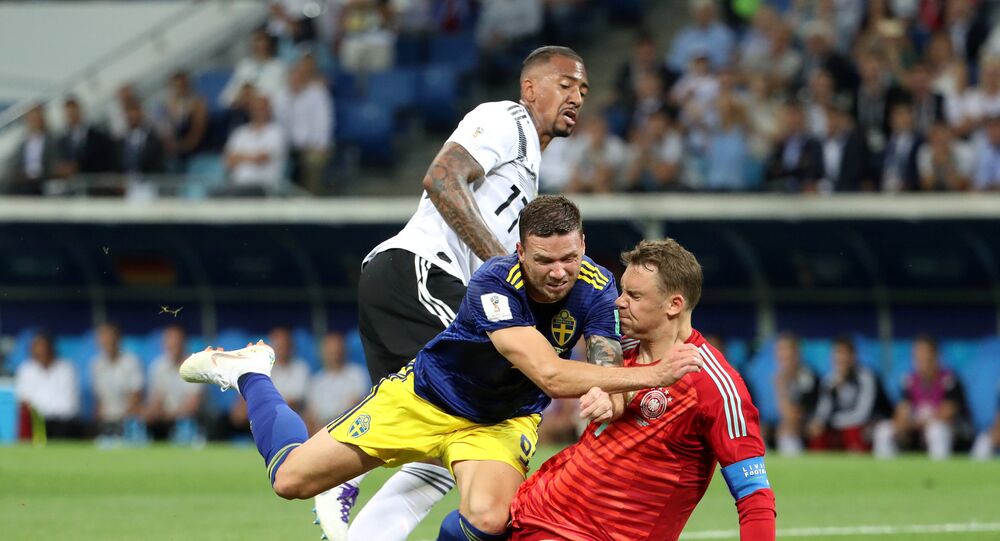 SOCHI (Sputnik) - Sweden head Coach Janne Andersson said on Saturday night that the behavior of Germany’s players after their Group F match was "rude" and he did not like it.

"Some Germany players were celebrating and were running towards us. It was as if they tried to run into us. It was rude… After the final whistle, people usually shake hands, not attack each other. I don't like this," Andersson said when asked why he looked so angry after the end of the match.

"That was a lack of respect, a disgusting behavior!" Forsberg said, as quoted by the German daily newspaper Bild.

In response, the German national football team apologized on Sunday for the behavior of their football officials following their 2-1 win over Sweden.

"It was an emotional game… The reaction or gesture of our representative at the Swedish bench was too emotional. It's not our style. We apologize to Sweden head coach and his team," the German national football team wrote on their official Twitter account.

Sweden scored the opening goal in the 32nd minute of the game, which took place at Sochi's Fisht Stadium on Saturday, however, Germany equalized just minutes into the second half and Toni Kroos won it for Germany in the 95th minute.

© Sputnik / Alexander Vilf
'We Could Have Won': Sweden Head Coach Praises His Squad's Game Against Germany
After the first two rounds of the World Cup group stage, Germany and Sweden both have three points, with Mexico leading Group F with six points and South Korea being on the last place without any points after two defeats.

Russia's first-ever FIFA World Cup will last till July 15, with a total of 64 matches set to be held at 12 stadiums across 11 cities.

'We Could Have Won': Sweden Head Coach Praises His Squad's Game Against Germany