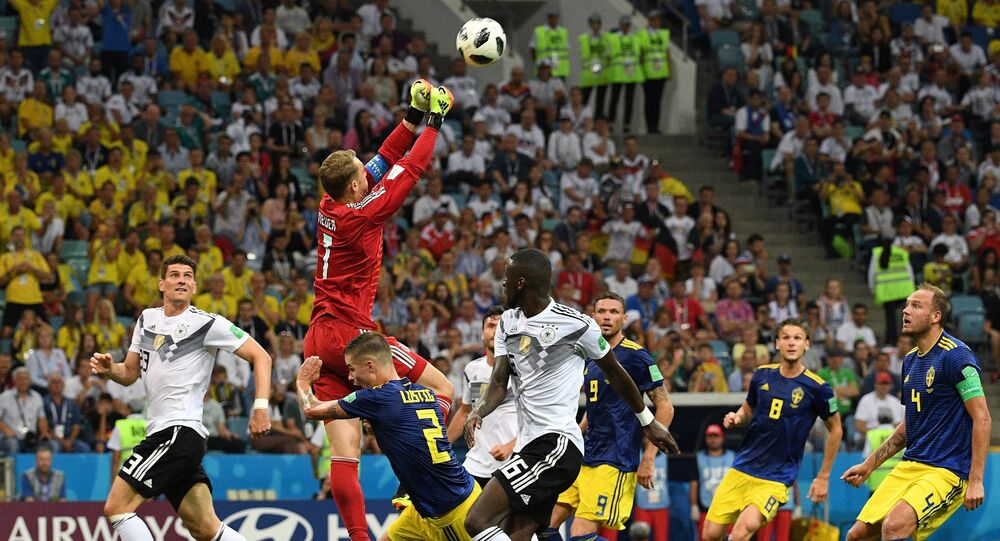 'We Could Have Won': Sweden Head Coach Praises His Squad's Game Against Germany

SOCHI (Sputnik) - Germany secured a dramatic 2-1 victory against Sweden on Saturday, with midfielder Toni Kroos scoring the winning goal in the 95th minute after star defender Jerome Boateng was sent off for two yellow cards in the 82nd minute.

Sweden played a “wonderful” game with Germany despite losing the teams' second Group F match, head coach Janne Andersson said on Saturday night after their encounter. Sweden scored the opener in the 32nd minute of the game, however, Germany managed to equalize just minutes into the second half.

“It is hard to speak, emotions are prevailing. We had a wonderful match, we played as we planned, scored an incredible goal… We could have won today, and we defended well in the second half,” Andersson told journalists at the post-match press conference, adding that Saturday’s defeat was “probably the hardest one” to take in his entire career.

“We are preparing for the game with Mexico. We have a good chance to reach the round of 16. Right now we are very distraught, but I am sure that on Wednesday we will manage to show a great game and reach the knockout stage,” the coach stated.

However, Sweden head Coach Janne Andersson said on Saturday night that the behavior of Germany’s players after the match was "rude".

"Some Germany players were celebrating and were running towards us. It was as if they tried to run into us. It was rude… After the final whistle, people usually shake hands, not attack each other. I don't like this," Andersson said when asked why he looked so angry after the end of the match.

“Yes, we failed to realize some moments, but I liked the morale of the team. We were sure that we will be able to get back into the game. We won this game in an emotional way as well, we remained calm and were certain of our victory,” Low told journalists at the post-match press conference, stressing that Germany “had no right to play for a draw.”

© Sputnik / Nina Zotina
World Cup - Group F - Germany vs Sweden - Fisht Stadium, Sochi, Russia - June 23, 2018
© Sputnik / Nina Zotina
Twitter Reacts to Miraculous German Victory Against Sweden in Last Minute Thanks to Kroos
Joachim Low also said that midfielder Sebastian Rudy had broken his nose in the heated encounter against Sweden. Halfway into the first half, Rudy injured his nose after sliding into a tackle with Sweden striker Ola Toivonen and catching a boot in his face.

Meanwhile, Man of the match, Germany forward Marco Reus said on Saturday night that the FIFA World Cup in Russia was being played at a “high level” and had seen the emergence of a number of “smaller national teams.”

“Many teams play here with passion and with heart. Maybe those efforts are the reason that so called ‘smaller’ national teams bring us so much problems. They have great defenses and the ability to counter attack. For me, it is a sign of a high level of the tournament,” Reus told reporters at the post-match press conference.

Germany and Sweden both have three points in their group, with Mexico in first place with six points. Germany will next face South Korea, who are bottom of the group after two defeats, on Wednesday, while Sweden will play with Mexico on the same day.