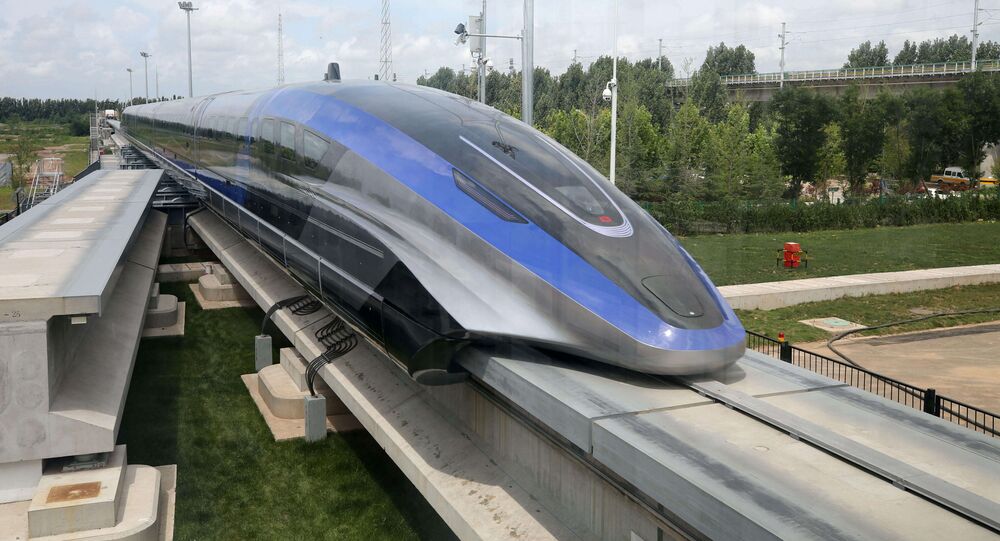 China has developed the world's speediest maglev transportation system, capable of reaching a top speed of 600 kilometres per hour; the first train rolled off the assembly line on Tuesday in Qingdao, a city in East China's Shandong Province, after five years of research and development.

The high-speed maglev is currently the fastest ground vehicle intended for regular transit. It is the fastest method of surface transportation, within a range of 1,500 kilometres. What is currently a 10-hour high-speed train trip from South China's Shenzhen to Shanghai will take only 2.5 hours once a maglev line is built.

Xinhua; Liu Kun
Photos: China Rolls Out ‘Super Bullet Maglev Train’ That Uses New High-Temperature Superconductor
The new maglev showcases a number of technology breakthroughs and advances, including a self-developed brake system that is 30 percent more efficient than the Shanghai maglev train, which means that the braking distance is reduced from about 16 kilometres to only 10 kilometres, CRRC Qingdao Sifang Rolling Stock Research Institute Co (CRRC SRI) told the Global Times on 20 July.

The CRRC technicians spent 19 months developing the magnetic poles for the whirlpool brake on the maglev train, which can be reused in an -25C to 170C environment and can withstand vibration.

The power supply system is one of the key systems of the high-speed maglev, which plays an important role in the safe operation of the train. When the speed exceeds 100 km/h, a non-contact power supply is adopted. The high-speed maglev train receiver system developed by CRRC SRI features a high degree of environmental adaptability and can work smoothly within a temperature range of -25C to 45C, Chinese experts said.

To guarantee smooth telecommunication during a high-speed run, 5G is reserved for the Wi-Fi system on the maglev, and maglev passengers will be able to charge their mobile phones wirelessly.