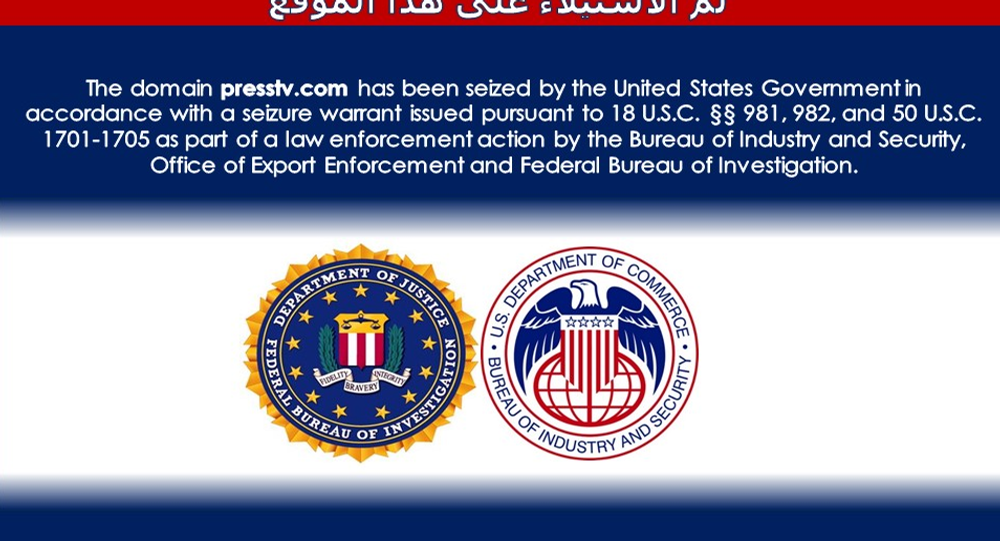 The Justice Department seized dozens of Middle Eastern domains this week, chief among them the .com domain of Press TV, a foreign language news service owned by Islamic Republic of Iran Broadcasting. Iran slammed the decision and warned it was “not constructive” for the ongoing nuclear talks.

Hezbollah leader Sayyed Hassan Nasrallah has lashed out at the United States government over Tuesday’s seizure of Iranian, Lebanese, Yemeni, and Palestinian news resources on Friday, suggesting that the move was very revealing when it comes to US claims about its support for freedom of speech and freedom of thought.

“The secretary-general stressed that it is necessary to condemn the US administration’s move to delete dozens of websites from countries of the region, saying it was no coincidence that these sites showed solidarity with the Palestinian people in the battle of the ‘Sword of Jerusalem’,” Hezbollah-affiliated Lebanese news site al-Manar reported, paraphrasing Nasrallah’s remarks in a televised speech. "Sword of Jerusalem" is the Palestinian term for last month’s fighting between Hamas and the Israeli military, which left several hundred dead and much of Gaza destroyed.

“Nasrallah considers this matter to provide additional evidence about the false claims of successive US administrations and their slogans about freedom of speech and freedom of belief,” the report added.

Nasrallah was also said to have reiterated his earlier willingness to negotiate with Iran – an ideological ally and partner to Hezbollah, to send fuel to Lebanon if necessary to help the country resolve fuel shortages amid the broader political and economic crisis facing the nation.

The Justice Department seized three dozen domains from the Middle East on Tuesday, including the .com domain of Press TV and the .net domain of al-Alam, an Iranian-owned Arabic-language broadcaster, in a “law enforcement action,” citing the sites’ violations of US laws and laws related to “unusual or extraordinary threat activity.”

Al-Masriah, a website affiliated with Yemen’s Houthis, with Palestine Today, a pro-Hamas site, were also seized. Meanwhile, Kata’ib Hezbollah, the Iraqi pro-Baghdad government Shiite paramilitary group which Washington has spuriously blamed for a number of attacks on US troops in Iraq, saw three of its websites seized.

© AP Photo / Andrew Harnik
Adviser to Press TV President: US Has Turned Into Biggest Enemy of Freedom of Speech & Expression
Press TV officials blasted the seizures, with senior channel figure Ahmad Ali-Akbari telling Sputnik that they demonstrated that Washington's rhetoric on free speech is nothing but a “tissue of lies,” and that America had shown itself to have “turned into the biggest enemy of freedom of expression, and possibly the biggest violator of human rights.”

The official also recalled that this week’s seizure was not the first time that Press TV had been targeted by the US and its Big Tech allies – with previous pressure including the termination of its YouTube account, and actions against its Facebook and Twitter pages.

Before Tuesday’s action, the DoJ had previously seized 92 other domains which it claimed were “unlawfully used by Iran’s Islamic Revolutionary Guard Corps to engage in a global disinformation campaign.”

The latest seizures came just days after Iran’s presidential elections, which conservative chief jurist Ebrahim Raisi handily won, and amid the ongoing negotiations on the restoration of the Iran nuclear deal. Presidential spokesman Mahmoud Vaezi condemned the DoJ’s actions, calling them a “mistaken policy” that’s “not constructive” for nuclear negotiations.