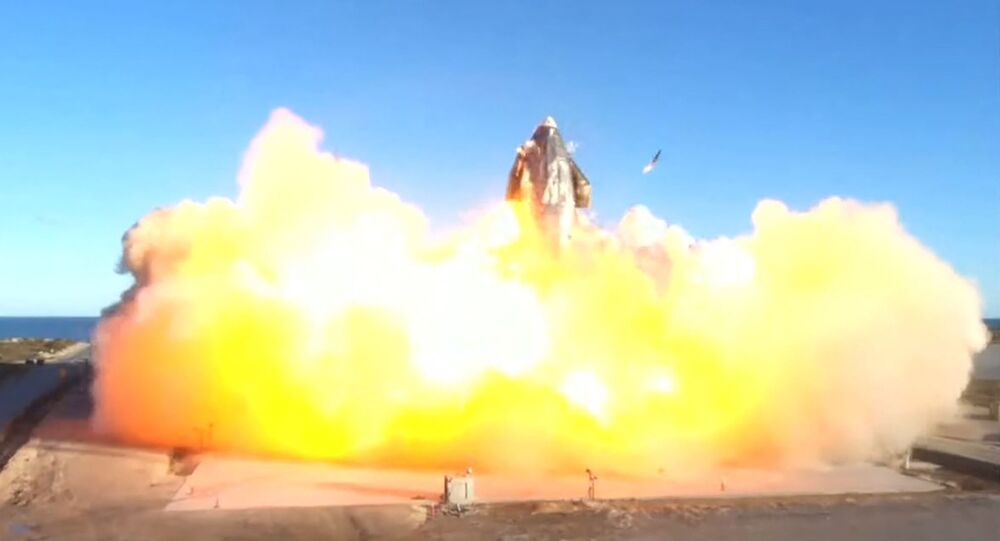 During the 9 December test flight, the SpaceX rocket managed to successfully launch and fly for over six miles, though it exploded upon landing.

During the test flight of its SN8 Starship prototype in December 2020, SpaceX ignored at least two warnings from the US Federal Aviation Administration (FAA) over the safety of the launch, The Verge reports, citing confidential documents and letters.

During the test, the SN8 prototype managed to liftoff and fly for more than six miles over the company’s facilities in Texas, only to explode during landing.

According to the media outlet, on the day of the launch, 9 December, FAA officials repeatedly rejected SpaceX’s weather and launch modelling data during "ad hoc meetings" with the company’s employees.

The models provided by the FAA on that day reportedly showed that weather conditions such as wind speed could strengthen the shockwave if the rocket exploded and potentially endanger nearby homes.

While SpaceX paused the countdown clock after the FAA refused its request to waive the safety threshold, the company’s launch director then restarted after believing the data was sufficient, the media outlet notes, citing a five-page report by SpaceX.

About 15 minutes before liftoff, the FAA reportedly "informed SpaceX that the weather data provided was not sufficient," and mere minutes prior to the launch, an FAA safety inspector warned the company staff via an open phone line that taking off would violate SpaceX’s launch license.

While the company ended up going ahead with the launch, the FAA’s space division chief Wayne Monteith later criticised the company’s actions in a letter to SpaceX president Gwynne Shotwell, slamming the company for acting "based on 'impressions' and 'assumptions,' rather than procedural checks and positive affirmations."

The Verge notes, however, that FAA investigators "couldn’t determine whether the SN8 license violation was intentional," and that SpaceX has launched four more rockets at the Starship site since then, "all with FAA approval and a few changes to its operations."